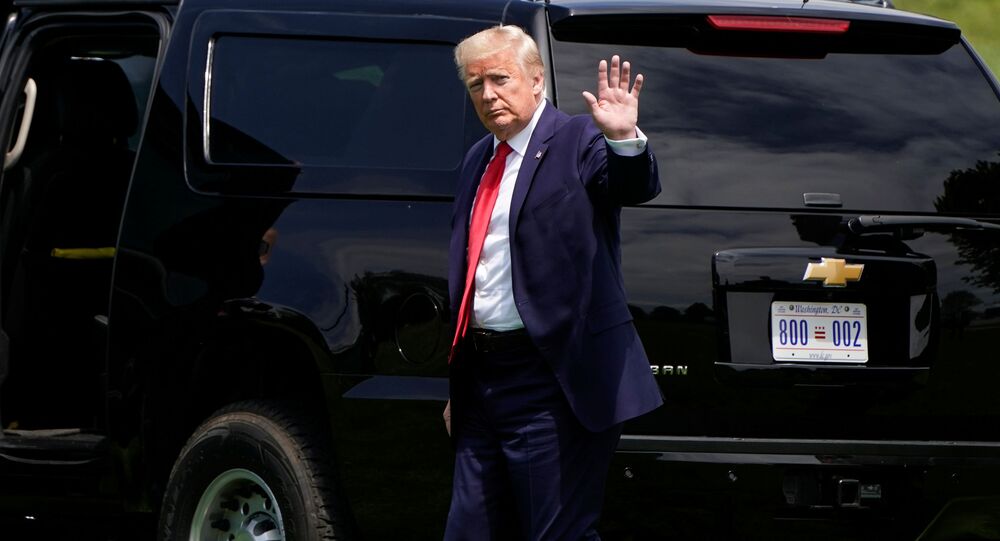 The president accused the social media giant of “completely stifling FREE speech” late Tuesday, warning that he would not allow this to continue after the microblogging platform put a “get the facts…” flag under his tweets about mail-in ballots.

US President Donald Trump doubled down following his spat with Twitter on Wednesday morning, accusing it and social media platforms as a whole of “totally” trying to “silence conservative voices”, and warning that he and Republican lawmakers would “strongly regulate or close them down, before we can ever allow this to happen.”

....happen again. Just like we can’t let large scale Mail-In Ballots take root in our Country. It would be a free for all on cheating, forgery and the theft of Ballots. Whoever cheated the most would win. Likewise, Social Media. Clean up your act, NOW!!!!

“We saw what they attempted to do, and failed, in 2016,” Trump wrote, recalling the alleged social media bias against his campaign for president four years ago. “We can’t let a more sophisticated version of that [to] happen again,” he added, urging the social media giants to "clean up your act, NOW!!!!"

The president also doubled back to Tuesday's tweets about mail-in ballots, in which he expressed his opposition to mail-in ballots in elections, citing the threat of forgeries, fraud and other manipulations. For the first time, Trump's tweets were slapped with a "Get the facts about mail-in ballots" 'fact-checking' tag by Twitter, with the company claiming that the tweets "contain potentially misleading information".

In his tweets Wednesday, Trump warned that allowing "large scale Mail-In Ballots" to "take root in our Country" would lead to "a free for all on cheating, forgery and the theft of Ballots," adding that under such a system, "whoever cheated the most would win."

Twitter stepped up the flagging and removal of "potentially harmful and misleading content" in recent months, with most of the content related to the coronavirus pandemic. The company has been accused of censorship by people with alternative viewpoints.

After his tweets were flagged on Tuesday, Trump accused Twitter of "interfering in the 2020 Presidential election" and stifling free speech.

The president has yet to clarify what sort of regulations his administration is considering against the company, although campaign manager Brad Parscale clarified Tuesday that the campaign already pulled its advertising from the social media giant "months ago" thanks in part to their "clear political bias".

© REUTERS / JONATHAN ERNST
Conspiracist-in-Chief? Donald Trump's Most Outlandish Online Theories Revisited
Trump is one of Twitter's most outspoken and popular users, amassing over 80 million followers and often revealing major policy decisions using the platform. Tweeting well over 11,000 times since entering the White House in January 2017, Trump has been dubbed by some as the 'commander-in-tweet'. The instantaneous, on-the-fly nature of the online platform has not been without its problems, however, with Trump regularly courting controversy over his contentious, inflammatory or trolling tweets aimed at political opponents, public figures and even foreign nations.
...
Reddit
Google+
Blogger
Pinterest
StumbleUpon
Telegram
WhatsApp
4717
Community standardsDiscussion