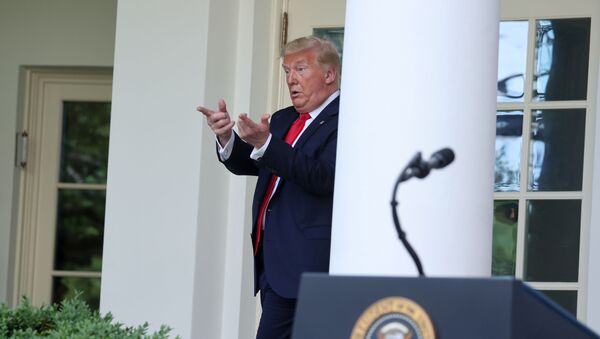 One of the world's biggest news-making Twitter accounts - the one run by Donald Trump - has been fitted with a fact-checking warning after spreading what the platform called "unsubstantiated claims" about mail-in voting.

Twitter has just given Donald Trump a flick on the nose for the first time ever.

A Tuesday presidential tweet claiming that vote-by-mail ballots would lead to a "rigged election" received a disclaimer encouraging users to "get the facts about mail-in ballots".

It redirects to reporting by CNN, the Washington Post and other news outlets and journalists who debunk that notion and argue, citing multiple studies, that mail-in ballots do not increase the risk of voter fraud compared to in-person voting. Trump in response accused Twitter of "stifling free speech".

Twitter said that it put the warning under its recently-updated guidelines on misleading information, which are meant to tackle tweets that contain "synthetic and manipulated media".

Donald Trump is a famous proponent of fringe theories, and some of his new posts may well get a similar label if he does not dig for some evidence to substantiate their contents before smashing the "Tweet" button.

There have been instances in the past when Trump tweeted things that some said would have had less prominent people banned from the site. Here are some of the most serious unchecked theories Trump had spread online.

Donald Trump has more than once insinuated that Joe Scarborough, co-host of MSNBC's talk show Morning Joe and his harsh critic, was involved in the 2001 death of Lori Klausutis.

Klausutis was an intern at Scarborough's Florida office when he was a member of Congress. She was found dead on the floor on his office at age 28. An investigation by local authorities found that she died accidentally after an undiagnosed heart condition caused her to fall and hit her head on a desk while at work.

In a series of tweets this month, Trump questioned these findings and suggested that an investigation should be reopened into the case, encouraging people to "keep digging" and "use forensic geniuses". Klausutis’ widower, Timothy Klausutis, has called on Twitter to remove the posts; the platform apologised for "the pain these statements, and the attention they are drawing, are causing the family" but refused to delete them because they do not violate its policies.

A blow to her head? Body found under his desk? Left Congress suddenly? Big topic of discussion in Florida...and, he’s a Nut Job (with bad ratings). Keep digging, use forensic geniuses! https://t.co/UxbS5gZecd

​2. Obama birth certificate
Trump was one of the main proponents of the so-called Birther Movement, a theory that his predecessor Barack Obama wasn't born in the United States and thus wasn't eligible to be President.

Trump pleaded repeatedly for Obama to release his birth certificate since 2010. Obama did so in July 2011; a copy of the long-form certificate he shared stated that he was born in Hawaii. Trump, however, continued to doubt it.

"An 'extremely credible source' has called my office," Trump tweeted in August 2012, "and told me that @BarackObama's birth certificate is a fraud."

An 'extremely credible source' has called my office and told me that @BarackObama's birth certificate is a fraud.

​A 13 December, 2013 tweet implied that Obama was involved in the death of Hawaii health official Loretta Jean Fuddy in a plane crash where she was the only fatality. Fuddy approved Obama's birth papers before their release.

How amazing, the State Health Director who verified copies of Obama’s “birth certificate” died in plane crash today. All others lived

Trump also called for hackers to obtain Obama's college records the following year, and finally abandoned the theory (at least in public) only in the run-up to the 2016 election.

Attention all hackers: You are hacking everything else so please hack Obama's college records (destroyed?) and check "place of birth"

Trump criticised China for years before making it to the Oval Office. When he was still a businessman, his accusations were limited to tweets and interviews and did not transform into trade wars.

One of them tackled two of Trump's biggest enemies at once: global warming and China. He tweeted that "the concept of global warming was created by and for the Chinese" to hurt US manufacturers.

Trump later backtracked on that tweet, telling Fox News that is was a "joke." However, he continued to question government studies on climate change as president and withdrew from the Paris Climate Agreement while also rolling back federal regulations on clean air, water and methane emissions.

In January 2016, then-Republican frontrunner retweeted a photo that appeared to show Fox News host Megyn Kelly posing with Saudi Prince Alwaleed bin Talal and his sister. The picture also claimed that Alwaleed was a "co-owner" of Fox News.

The photo surfaced at the peak of Trump's feud with Fox News and Kelly in particular, after she grilled him during a Republican presidential debate and Trump accused her of treating him unfairly.

Several fact-checkers including PolitiFact and Snopes said that the photo was fabricated and that Alwaleed's investment company owns just 6.6 percent of the channel's parent company, 21st Century Fox, which is far from a controlling or co-controlling stake.

Alwaleed, who previously traded barbs with Trump over his proposed Muslim ban, also hit back, claiming to have "bailed" out the 2016 contender twice.

Trump:You base your statements on photoshopped pics?I bailed you out twice; a 3rd time, maybe?https://t.co/Raco0mvusp https://t.co/jStBl7Ghia

Donald Trump famously beat Hillary Clinton in November 2016 after winning 304 electoral votes versus Clinton's 227. However, he received almost 2.9 million ballots less than Clinton, which gave him the largest deficit for a winning presidential candidate in US history.

Just weeks after the election, the president-elect tweeted that there was "serious voter fraud in Virginia, New Hampshire and California", states carried by Clinton. He claimed in another tweet that he would have won the popular vote as well if not for the "millions of people" who cast their votes illegally (he later put that number at between 3 and 5 million).

In addition to winning the Electoral College in a landslide, I won the popular vote if you deduct the millions of people who voted illegally

​After taking office, Trump assembled a commission to investigate allegations of voter fraud in 2016, but that body was disbanded in early 2018 with the White House blaming states for not turning over requested voter information.

Maine Secretary of State Matthew Dunlap, a Democrat who sat on the commission and reviewed its documents, said that its evidence of voter fraud was "glaringly empty."