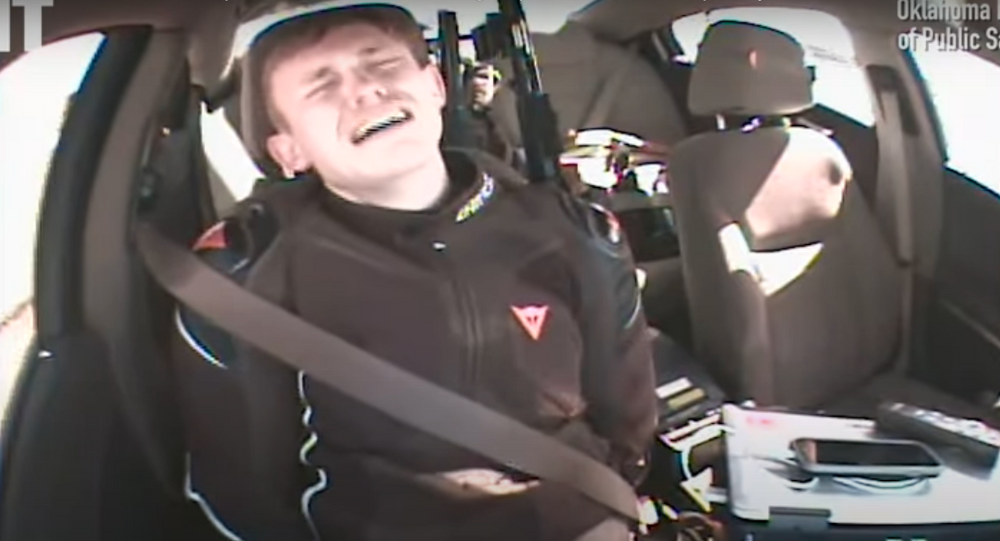 A senior airman of the US Air Force was arrested on April 25 after he and two other bikers attempted to evade Oklahoma police in a dangerous, high-speed pursuit that exceeded 180 miles per hour.

Dashcam footage of the 183 mph chase was made public by the Oklahoma Department of Public Safety and later uploaded to YouTube by the Military Times. While the other two motorcyclists were eventually arrested by authorities, they managed to escape during the recorded pursuit, which began around 4:30 p.m. local time on April 25.

Be advised, the video below contains language that may offend some audiences.

Citing the OHP arrest report, the Air Force Times reported that Jack’s chase began after he clocked the motorcyclists going 80 mph, 10 mph over the posted speed limit. The chase took a dangerous turn after two of the men refused to comply with the trooper’s order and the third engaged in an unsafe lane change before moving to the highway’s shoulder.

Jack continued to pursue Workman and the other motorcyclist, who at that point had both accelerated to 120 mph and crossed into Oklahoma’s Carter County. The trooper clocked Workman at a top speed of 183 mph while eight miles into the potentially fatal, high-speed chase.

“There was approximately half a mile of separation from the lead (black) motorcycle and the second (red) motorcycle,” the report detailed, as reported by the Air Force Times. “Jack could observe that they were both passing slower vehicles on the inside lane and an incredibly high rate of speed.”

Traffic congestion eventually slowed down the chase and provided Jack with the opportunity to get in front of Workman’s sport bike. The other motorcyclist managed to escape, but was later arrested.

“You almost killed people out here!" the trooper exclaimed in the footage. "You’d have just got a ticket! Then you almost kill yourself!”

The airman was overheard apologizing for his failure to stop.

“I can’t lie, I’m in the military … I know both of them,” Workman confessed. “I’m not gonna f**king lose my job because of them. I didn’t even want to fucking ride that fast."

Workman was charged with endangering others while attempting to elude a police officer and was booked in Carter County. He was later released on a $2,000 bond.

While the felony charge carries a sentence of between one and five years behind bars and/or a fine ranging from $1,000 to $5,000, the OHP case was later turned over to the US Air Force for prosecution.