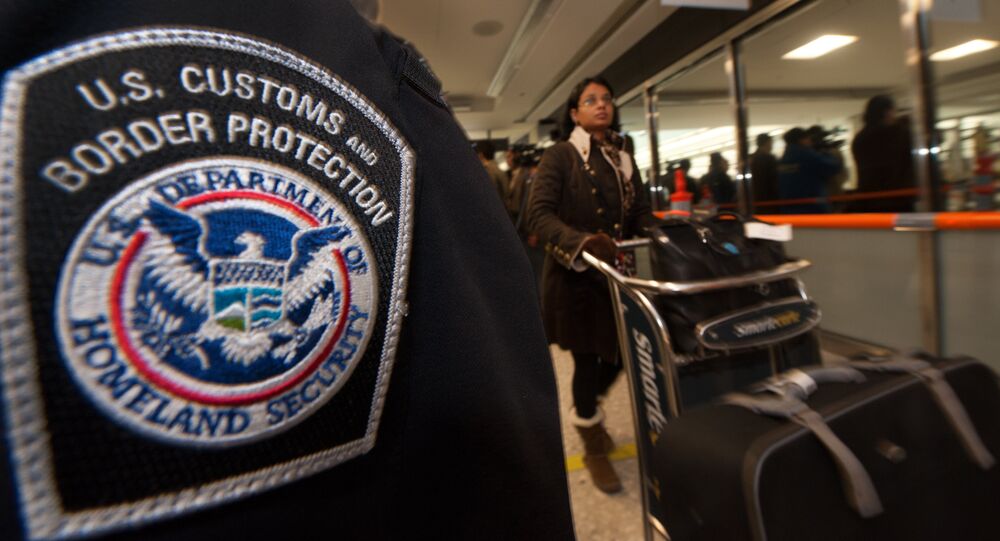 President Donald Trump signed an executive order on 22 April suspending immigration into the US for 60 days, justifying his move as spurred by an "attack from the Invisible Enemy”, and arguing that it was needed to protect Americans who had lost their jobs in the COVID-19 pandemic.

US President Donald Trump's temporary order to suspend immigration is part of a broader scheme aimed at curbing arrivals into the country, Senior White House adviser Stephen Miller supposedly shared in an off-the-record call on 23 April, reports The Washington Post.

Miller is suggested as saying that "the most important thing is to turn off the faucet of new immigrant labor" and that the temporary ban would limit "chains of follow-on migration".

The Presidential adviser is alleged as having hailed the order as a "historic" move to protect US workers from foreign competition during the current pandemic.

Acting Deputy Homeland Security Secretary Ken Cuccinelli was briefly part of the call, according to the audio cited by the outlet, and acknowledged the order fell in line with the far-reaching immigration policy advocated by the Trump administration.

“This is something the president has been looking at himself since the economic effects of the covid virus began… We’ve had numerous conversations with him. And so what you saw yesterday was a continuation of his own thinking,” Cuccinelli reportedly said.

Donald Trump signed the order on 22 April, effectively suspending for 60 days the entry of some green card applicants based abroad. The order is subsequently to be reevaluated and potentially extended.

The temporary migrant ban largely applies to people outside the country who are seeking permanent residency in the US, or green cards, and excludes those who are in the country seeking to change their immigration status.

Trump also noted Tuesday that the order would not apply to seasonal farm workers on seasonal guest worker visas.

The president tweeted about the impending executive order on Monday as an attempt to deal with an "invisible enemy".

“By pausing immigration we will help put unemployed Americans first in line for jobs as America reopens. So important,” Trump subsequently clarified his earlier tweet on Tuesday evening.

The order does not offer exclusions for foreign national parents and parents of US citizens, spouses and children of legal permanent residents and beneficiaries of the Diversity Immigrant Visa program (Green Card Lottery).

“It could be modified… Right now, we have a very powerful immigration ban, but it may be modified, meaning made tougher or made less tough,” Trump told reporters on Wednesday.

The move sparked a fierce debate, with critics insisting it was adopted under the influence of Stephen Miller, a long-time advocate of placing more restrictions on immigration.

"Stephen Miller somehow, someway convinces President Donald Trump to constantly go to immigration as an issue, regardless of the policy matter we're trying to address," Rep. Tony Cárdenas (D-Calif.) was cited by The Hill as saying on 24 April.

Carl Shusterman, a Los Angeles immigration attorney, was quoted as saying the executive order may be only the first step in a major restriction on immigration into the country.

© REUTERS / Mike Blake
A view of the lanes where U.S. federal agents inspect vehicles leaving the country at the U.S.-Mexico border after U.S. President Donald Trump tweeted that he will be signing an Executive Order to temporarily suspend immigration into the U.S. during the coronavirus disease (COVID-19) outbreak in San Diego, California, U.S., April 21, 2020

At the same time those urging broader restrictions on immigration to the US deplored Trump's order for its exemptions.

Roy Beck, president of NumbersUSA, insisted that "corporate lobbyists and other immigration expansionists in the White House persuaded the President to significantly water down" the order.

"That is something that the department has been looking at for the past several months, so we are well underway and look forward to presenting to the President those recommendations for additional steps," said Wolf.

There has been no official comment on the report from Stephen Miller or the White House.