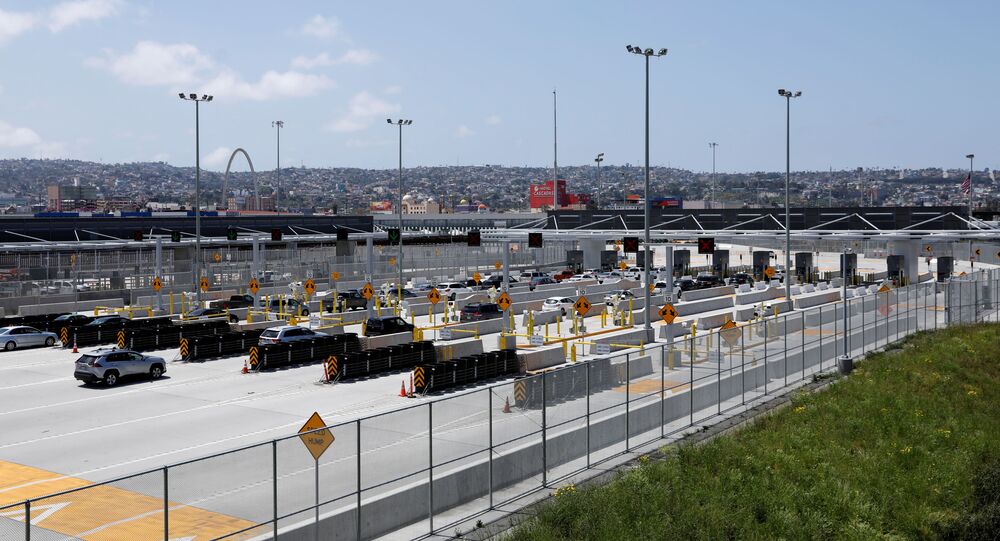 On Wednesday, US President Donald Trump signed an executive order barring certain categories of immigrants from entering the United States during the next 60 days. US political observers and law experts have explained why the measure has prompted a fierce debate and fears of a crackdown on migrant rights.

The 60-day migrant ban largely applies to people seeking permanent residency in the US, or green cards, and won't affect seasonal workers entering the country on a temporary basis. The president first tweeted about the forthcoming executive order on Monday as a measure to tackle the "invisible enemy".

Although the executive order cites numerous exemptions, including for healthcare personnel, the move has prompted speculations that Trump is using the crisis to crack down on immigration. This is not the first time that the US president has come under a firestorm of criticism from the Democrats and left-leaning social activists due to his migration policies. One of Trump's first orders, titled Protecting the Nation from Foreign Terrorist Entry into the US, reduced the number of refugees to be admitted into the country. At the same time, Trump's border wall plan was aimed at dealing with the illegal immigration problem.

Executive Order's Language Triggers Fears It Can be Extended

"The executive order (EO) explains that the rationale for this policy change is economic and not health-related", says Tania Morris Diaz, staff attorney at the Michigan Immigrant Rights Centre. "The EO does carve out an exception for health care workers but gives the Department of State the discretion to decide if someone fits into that exception with very little guidance or transparency as to how those decisions will be made".

The Department of State has already put a lot of immigration processes on hold due to the pandemic, notes Diaz, bemoaning the fact that the new executive order further "perpetuates the false narrative that immigrants 'steal' jobs".

However, the major problem is that the language of the document indicates that it may be extended at a later date, the attorney warns.

"If this is based on economic reasons, Trump could very likely extend this beyond the 60 days, beyond the dates Consulates re-open, and beyond the existence of a global pandemic. The only way to undo that would be through a long, legal battle in courts", she believes.

The executive order may be only the first step in a major restriction on immigration into the country, Carl Shusterman, an immigration attorney out of Los Angeles, says, echoing Diaz.

"The shutdown of most family-based categories and the diversity lottery may be extended far beyond the initial 60-day suspension", Shusterman observes, alleging that the order may be expanded in May or June to include various visa categories for temporary workers.

Trump's decision to tighten the screws on immigration is actually part of his effort to deflect the blame for unpreparedness for the coronavirus crisis to migrants, deems David Schultz, a political science professor at Hamline University.

"Reports document that the US already has had more than 800,000 infected with the coronavirus, with nearly 50,000 dead", he stresses. "In a nation so wealthy and powerful, many wonder how it could happen, placing blame on President Donald Trump’s initial refusal to acknowledge the disease, and then his failure of leadership in confronting it.  As a result, Trump’s approval ratings have gone down, potentially threatening his chances at re-election this November".

Having pinned the blame on China and the World Health Organisation (WHO) for the outbreak, Trump is now linking the coronavirus to immigration "much in the same way that four years ago he connected crime and the economy to race and immigration", the political scientist insists. According to him, the president's new migrant order is likely to reinvigorate his base ahead of the November elections.

Overall Impact of the Measure Will be Relatively Modest

"The overall impact of the measure will, though, be relatively modest, since it focuses primarily on green cards, and will block around 50,000 over the two-month period it is in force, a number that is a mere drop in the bucket in the United States. It also does exempt spouses and children of US citizens as well as health care professionals, along with investor visas", Jones emphasises.

He agrees that Trump's restrictive immigration policies will play very well politically, especially in the key rust belt battleground states of Pennsylvania, Ohio, and Michigan, which the incumbent president needs to win in November to obtain re-election. However, he is not the only politician supposedly capitalising on the situation, the political scientist points out.

Earlier, some Democrats used the crisis to push liberal reforms, the professor recollects, citing a broader use of mail ballots and the expansion of federal funding for health care, urban cities, and minority-owned businesses. For their part, the Republicans "have used the crisis to push conservative reforms such as greater restrictions on abortion, a loosening of environment regulations, and greater restrictions on immigration".

Both parties are trying to exploit the pandemic to advance their broader political agendas, the academic opines. According to him, Trump's new migrant executive order does not ring the alarm bells given its symbolic nature.