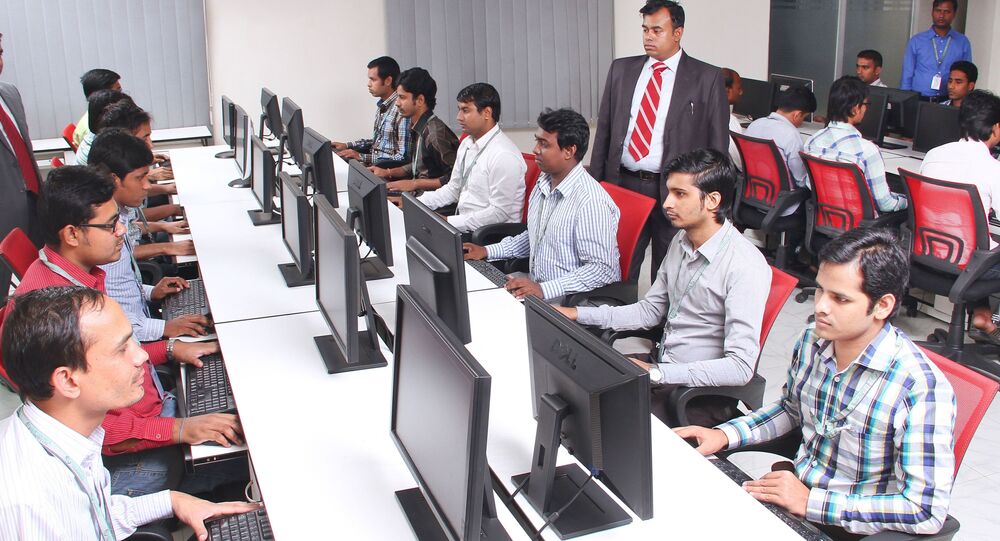 New Delhi (Sputnik): With the COVID-19 pandemic hitting the US hard, President Donald Trump has decided to suspend immigration to the country for the next two months, which may lead to difficulties for Indian IT specialists.

In a bid to ensure employment opportunities for American citizens after COVID-19, US President Donald Trump announced a suspension of immigration for green card seekers for 60 days. The move is likely to have harsh consequences for skilled Indian IT professionals – who are hired by US-based multinational companies at lower salary packages.

“The initial jobless claims has jumped to its highest-ever reporting, having never exceeded 700,000 over history since in 1967. Now, with the ban on immigration, the US – which is struggling with an unemployment and jobless situation – is trying to protect their interest. There could be staffing challenges for large Indian IT service companies in the tune of two-three percent revenue hits”, Thomas George, president of the India-based market analysis firm CyberMedia Research (CMR), told Sputnik.

President Trump’s announcement raised concerns for NASSCOM, the apex body of the Indian IT industry, which believes that it will take time to get acquainted with the “new normal”. The industry body took to Twitter seeking elaborate details on the immigration ban.

NASSCOM seeks details on the Executive Order of the President of the United States suspending immigration temporarily.

​Sputnik reached out to NASSCOM for a comment on the situation, but did not receive an answer.

Indians, among others, did not take the decision lightly and slammed President Trump for being “racist”. Trump's decision has propagated uneasy sentiments among Indians just days after the country supplied hydroxychloroquine to the US as a medical weapon against the coronavirus.

This is what India gets as a gift in return for sending huge quantities of Hydroxychloroquine to Modiji's dear friend Mr Trump. #H1Bhttps://t.co/zJV3EjDGtM

So why not just ban all H1B visas (or any other visa that permits employment)? I mean, is 80yo Indian grandma who is trying to visit her family really going to be trying to get a job?? 🙄 https://t.co/IvoigSp50b

Have I ever mentioned how US immigration law is just openly racist, making it harder to get into the US from China and India than anywhere else for no reason other than racism? https://t.co/ngkEIaJrM7

​The US grants 85,000 work visas annually, out of which nearly 70 percent are taken by Indians, according to United States Citizenship and Immigration Services (USCIS) data for 2017. At the time, the USCIS noted that out of the 3.4 million H-1B visa (non-immigrant visa) applications filed in the decade to 2017, Indian applications made up around 2.2 million.

Indian IT and ITeS companies have set up over 1,000 global delivery centres in about 80 countries across the world and most of these centres are in the US.

India Clears First Set of Hydroxychloroquine Tablets for 13 Countries, Including US - Sources

US Government Approves $155 Million Sales of Torpedoes, Missiles to India