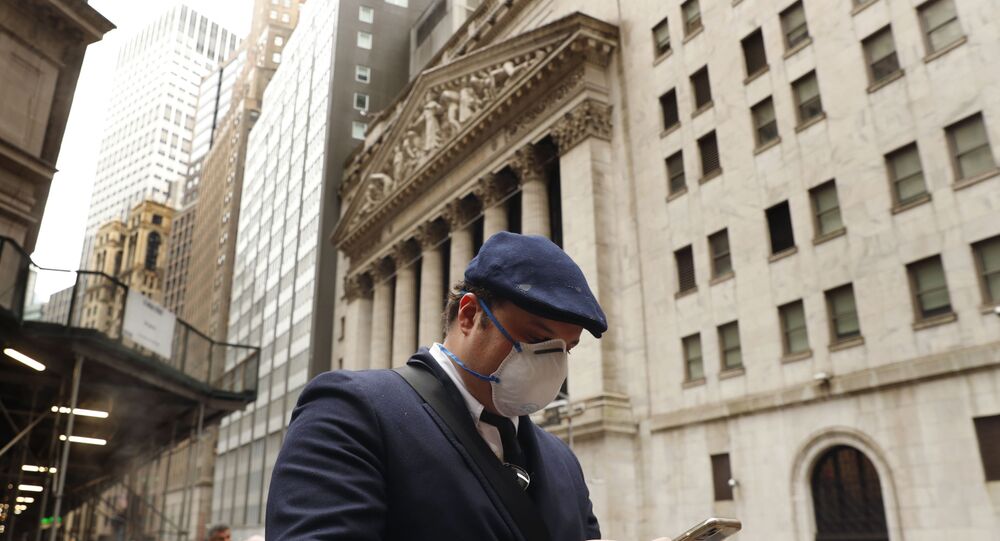 COVID-19 Fallout: Why US May Be Hit by ‘Tsunami of Inflation’

The US House of Representatives has approved a hotly debated $2.2 trillion stimulus bill to fight COVID-19, with the package of measures now slated to head to the president's desk for signature.

US stock indexes fell sharply at the opening on Friday as investors reacted to the United States becoming the country with the largest number of confirmed coronavirus infections.

This followed the Federal Reserve announcing an array of measures aimed at maintaining stability as the coronavirus pandemic continues to ride roughshod over the US economy.

Many experts, however, have already warned that the main result of such assistance will be an unprecedented surge in inflation.

Analyst Peter Schiff, president of the brokerage company Euro Pacific Capital Inc., for his part, believes that the main trouble is that the Federal Reserve and the US government are repeating the mistakes of 2008. According to him, “they are going to unleash a tsunami of inflation”.

Schiff argued that hyperinflation “has gone from the worst-case scenario to the most probable scenario”, something that he said means that “people have to act quickly to protect themselves”.

US ‘Already in Recession’

He was echoed by Austan Goolsbee, economics professor at the University of Chicago Booth School of Business and former economic advisor to Barack Obama, who told the Business Insider that the US is “not going to be able to avoid recession”.

Referring to the ongoing coronavirus pandemic, Goolsbee predicted that “the economic impact on the US is going to be worse than it was in China” and that “the same-size outbreak” will “just have a bigger negative hit on the US economy”.

To resolve the problem, it’s necessary to take several steps and step one should be related to the government “getting some control on the virus”, according to Goolsbee.

He said that he doesn’t “totally” understands why the US is “not pulling out every stop we have to try to slow the rate of spread of the virus”.

“Step two, I think it's misleading that they're calling this a ‘stimulus package’. They should call it a 'relief package' because it's aiming at trying to do what you need to do next, which is cover the bills so nobody starves, nobody has to liquidate everything just because of this hopefully temporary slowdown”, he added.

Goolsbee also warned of the worst-case scenario of the COVID-19 pandemic in terms of economic damage.

“[…] We combine the downturn of 1929 to '32 with the financial crisis of 2008 and we get out of the normal business cycle, which is to say the self-correcting mechanism no longer works. Even when the virus passes by or we get a vaccine or a treatment, the economy cannot come back, it's just so far down that it can't recover. That's the worst-case scenario”, he argued.

The view was shared by Daniel Lacalle, chief economist and investment officer at the company Tressis Gestión, who claimed in a recent article that “calls for large fiscal packages to offset the pandemic may be useless” and that “the economic implications of a [coronavirus] pandemic will not be solved with massive spending increases”.

In this context, Abdolreza Abbassian, a senior economist at the UN Food and Agricultural Organization, for his part, was cited by the Financial Times as saying earlier this week that if the coronavirus-related crisis “drags on into the summer, it can be a huge blow”.

US Now Leads World in Number of Active Coronavirus Cases