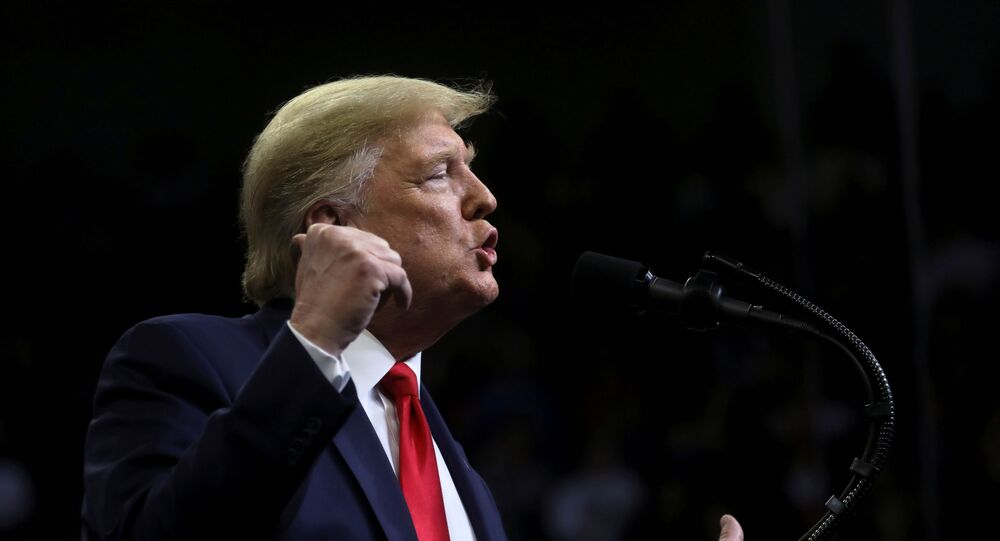 WASHINGTON (Sputnik) - US President Donald Trump will deliver his first term's last State of the Union address on Tuesday evening, which is expected to boost his reelection bid with an account of the administration's record, while also outlining future endeavors, in front of a Congress that has yet to exonerate him on impeachment charges.

Trump is slated to deliver the annual speech before a joint session of US Congress beginning at around 9:00 p.m. EST (2:00 a.m. GMT on Wednesday).

The speech is an opportunity for the president to formally outline his agenda to Congress for the coming year, which typically includes legislative and foreign policy objectives.

The president often uses the format to highlight his or her administration’s accomplishments.

The State of the Union address is traditionally delivered on the premises of the US House of Representatives inside the Capitol building.

The president’s entire cabinet typically attends the event except for one secretary - dubbed a 'designated survivor' - who will remain off-site to ensure continuity of government in case of a catastrophe.

US Supreme Court justices, the Joint Chiefs of Staff, and diplomatic corps are also expected to attend, along with guests of the president and lawmakers.

The Democrats picked Michigan Governor Gretchen Whitmer to deliver the opposition response to the presidential address.

In the State of the Union, his last before the presidential election in November, Trump is expected to address tax cuts, diminishing unemployment, foreign trade pacts, and efforts to curb the opioid epidemic and illegal migration.

Recent flare-ups with Iran, unabated tensions with Russia and China, and yet-to-be fulfilled promises to bring home American troops from overseas deployments dominate the US foreign policy agenda and may also be mentioned in the text.

Trump’s address, ironically, comes one day before a vote in the US Senate that could officially end the entire impeachment process.

On 18 December, Democrats in the House of Representatives impeached Trump, claiming that he had made efforts to enlist Ukraine’s help in investigating allegations of corrupt business practices by his 2020 presidential rival Joe Biden's son Hunter in exchange for $600 million in military aid to Kiev.

© REUTERS / Senate Television
In this image from video, Senators vote on approving the rules for the impeachment trial against President Donald Trump in the Senate at the U.S. Capitol in Washington, Wednesday, Jan. 22, 2020

Trump has repeatedly said he has broken no laws and characterized the impeachment as a hoax and a political witch hunt by Democrats to reverse the results of the 2016 presidential election.

Meanwhile, the Republican-majority Senate may - as early as Wednesday - wrap up the saga with the president’s full acquittal, which would allow Trump to remain in office.

Trump will be the second US president to give a State of the Union address amid an impeachment trial. In 1999, then-President Bill Clinton was in a similar position but did not mention the word impeachment once during the address.

Trump has signaled that he will follow Clinton’s example. He vowed to "not even mention" his legal woes and focus instead on the accomplishments of his presidency that appeal to his traditional constituency and can lure new voters, the Politico news site reported, citing White House sources.

Meanwhile, many of his opponents locked horns on Monday at the Iowa caucuses, the first primary election, vying for the Democratic nomination to face off with the incumbent in November.