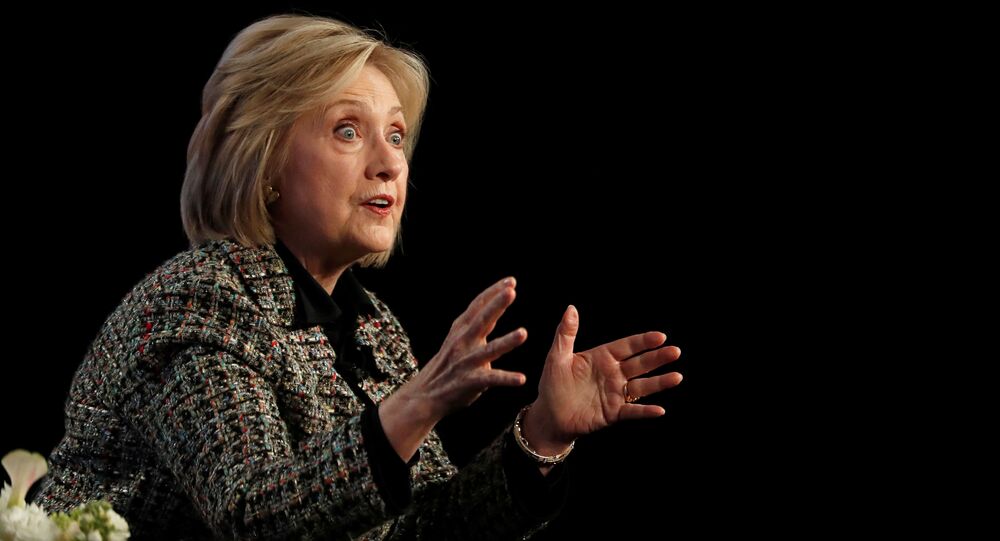 'She Was So Easy': Trump Asks Supporters if He Should 'Take Another Crack' at ‘Crazy’ Hillary

US President Donald Trump taunted Democrats at a major rally in Iowa on Thursday night on the eve of key events in the ongoing Senate impeachment trial against him, and just days before the nation’s first presidential caucuses there.

US President Donald Trump addressed a rally in Des Moines, Iowa on Thursday, 30 January, mentioning he would love to run against former Secretary of State Hillary Clinton for president again.

"Wouldn't we like to run against her? Who's tougher? Her, Crazy [Vermont Senator] Bernie [Sanders], Biden, Buttigieg? Who would be the closest? I don't know. Maybe we take another crack at Crazy Hillary, okay?"

Trump then added: "She was so easy."

Hillary Clinton lost against Donald Trump as the Democratic presidential nominee in 2016 , and has often hinted she has considered reentering the political arena to face off against her one-time rival.

© AP Photo / Evan Vucci
Hillary Clinton Notes She Still Has An 'Urge' To Launch 2020 Presidential Bid
"I think all the time about what kind of president I would have been…and what I would have done differently and what I think it would have meant to our country and the world," Clinton told BBC Radio in November 2019.

"I will certainly tell you I'm under enormous pressure from many, many, many people to think about it," Clinton added.

Donald Trump took the stage at Drake University in Des Moines for his fourth rally of the year on Thursday just days before the Iowa Caucuses - the first stop in the race for the Democratic nomination.

Trump spoke to the crowd for nearly 90 minutes, touting the US-Mexico-Canada Agreement [USMCA] trade deal he signed on Wednesday to replace NAFTA, as well as the US-China trade deal.

Great poll in Iowa, where I just landed for a Big Rally! #KAG2020🇺🇸 pic.twitter.com/4YCo01XYCn

“Crazy Schiff. Shifty Schiff. He’s a sick puppy. But you know what, today I hit my highest poll numbers since I got elected because the American people, and frankly people all over the world, know it’s a hoax. They understand it. They know it’s a hoax.”

Trump added: “But the Democrats are trying to overturn the last election. We will make sure they face another crushing defeat – right? – in 2020.”

Thursday saw Day Nine of President Donald Trump's impeachment trial against Trump, who has repeatedly denied the Democrats’ accusations that he “pressured” Ukraine to probe former US Vice President and current presidential hopeful President Joe Biden over alleged corruption, something that the Democrats claim is tantamount to abuse of power.

The Senate is expected to vote Friday or Saturday on whether to allow additional witnesses and evidence in the trial.