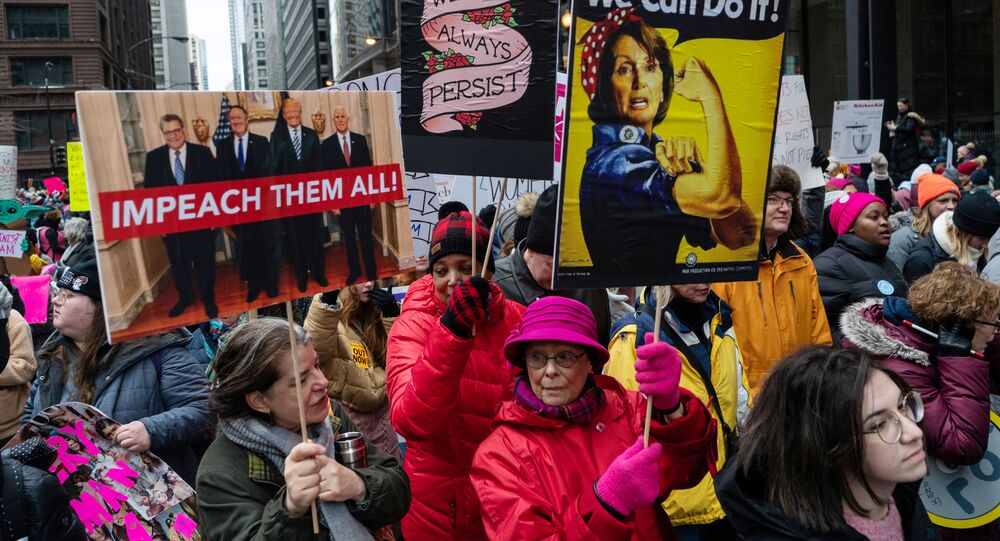 WASHINGTON (Sputnik) – Several thousand people gathered in Washington on Saturday to join a rally for women’s right and protest against US President Donald Trump’s policies, a Sputnik correspondent reported from the scene.

Light frost, snow, and freezing rain did not deter activists who began their Women’s March from Freedom Plaza at Pennsylvania Avenue just between the White House and the US Congress, and steps away from the Trump International Hotel.

"The mission of Women’s March is to harness the political power of diverse women and their communities to create transformative social change", organisers said. "We are committed to dismantling systems of oppression through nonviolent resistance and building inclusive structures guided by self-determination, dignity and respect".

Protesters started the rally with a moment of silence to commemorate victims of women's rights violations. After a short opening ceremony, they marched in a wide perimeter around the White House. A women’s musical group from Chile performed a global feminist protest anthem called A Rapist in Your Path, with people singing along in English and Spanish.

‘The patriarchy is our judge that imprisons us at birth.’ — Protesters gathered to perform the global feminist anthem ‘A Rapist in Your Path’ during the 2020 Women’s March in Washington, D.C.. The song was first written and performed during national protests in Chile last year. pic.twitter.com/MlkZZIcpLj

"Today we are not dealing with the evidence of hate, we are going to deal with love", Reverend Sheri Dickerson from Oklahoma City said.

Addressing the audience of thousands, Dickerson noted that women are the soul of the nation. "Women of this nation must become its soul. Love overcomes hate", she added.

"When women are come together, changes begin around our nation and world", he said.

Many protesters brought their own posters. "Women’s rights are human rights", "Unlock the future for women and girls", "Equal means equal", they said.

Thousands of people joined Women's March in Washington on Saturday. Many protesters are calling for Trump’s impeachment #WomensMarch2020 pic.twitter.com/SP4ZyiTqMR

The rally was peaceful, but dozens of police officers were on hand to mantain order. Some verbal skirmishes flared up between opponents and supporters of abortions, but they were very brief and calm.

Some protesters joined the rally not only to support women, but to express their frustration with President Donald Trump. "Impeach Trump", "Trump/Pence Out Now", their posters said.

"I am against Trump. He is taking this country backwards", a woman in a red 19th century style coat and hat told Sputnik. "I am here because I am scared".

Another lady, named Mary Lou, said that she comes to every rally against Trump. "I do not care if it is a women rally, climate change – I come to all of them", she told Sputnik. "Trump is bad on all levels for women, for men, the young people, for the climate, for democracy, for everything".

Organisers said that protesters sent a strong message of their determination to fight for women’s rights and against Trump.