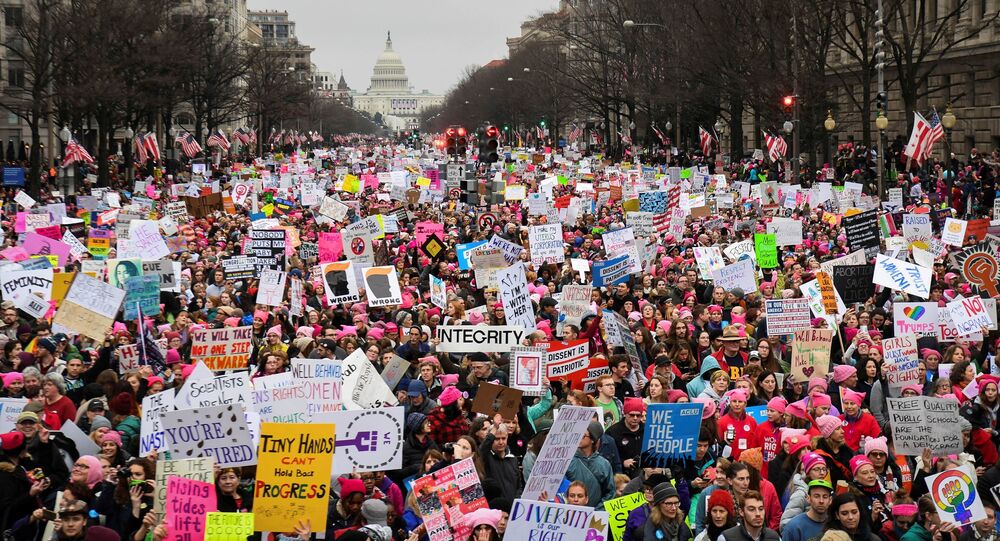 A controversial photo that recently attracted media attention was positioned on a display as a part of an exhibit celebrating the centennial of women’s suffrage in the United State's National Archives. The picture showed a 2017 rally on Pennsylvania Avenue in Washington DC the day after Donald Trump was elected president.

The photograph, reportedly taken by a Getty Images photojournalist, depicts the large street completely filled by the throng. Many protesters held anti-Trump banners.

The Washington Post was among the first to spot that placards had been altered, decreasing the ability to read what was written on the signs in the photograph. According to a media report, only placards that contained obscene slogans were blurred.

The National Archives admitted on Saturday that it "made a mistake" by altering anti-Trump slogans and took down the controversial picture from the display.

"We made a mistake. As the National Archives of the United States, we are and have always been completely committed to preserving our archival holdings, without alteration. In an elevator lobby promotional display for our current exhibit on the 19th Amendment, we obscured some words on protest signs in a photo of the 2017 Women’s March. This photo is not an archival record held by the National Archives, but one we licensed to use as a promotional graphic. Nonetheless, we were wrong to alter the image", the statement read.

The agency also apologized in the statement.

The National Archives earlier defended what media observers suggested was censorship, claiming that some of the slogans could be inappropriate for young people, while citing a wish to remain nonpartisan.

Historians in the US slammed the move, suggesting that censoring historic images will confuse and mislead the public.