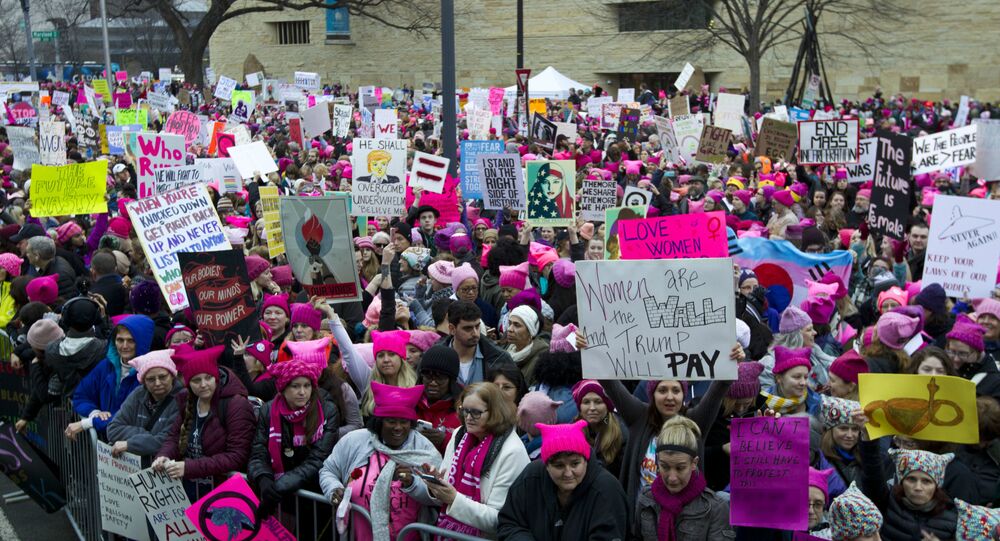 People from around the world have taken to the streets to denounce violence against women, voice support for the #MeToo movement and show their discontent with President Donald Trump’s policies.

Thousands of protesters hit the streets of New York, Washington and Los Angeles for the second annual Women’s March, to be held on Donald Trump’s inauguration anniversary. This year’s demonstration is being held in coordination with ongoing rallies across Europe, China, Australia and other countries.

This year was pivotal for women’s rights with the #MeToo and #TimesUp movements against sexual abuse and harassment, triggered by allegations against powerful men in the entertainment industry and beyond. As a sign of support, many activists wear pink cat-ear caps, which were created for the 2017 march as a reference to a comment made by Trump about female genitalia. The hats immediately became a symbol of women's empowerment and opposition to President.

Protestors marching down Benjamin Franklin Pkwy chant “This is what democracy looks like” at the 2018 Philadelphia Women’s March pic.twitter.com/GztO8E5259

Linda Sarsour, one of the organizers of the 2017 Washington march, told the Associated Press that Las Vegas, Nevada was set to hold a major march on Sunday because “it's a strategic swing state that gave Hillary Clinton a narrow win in the presidential election.”

"I think when women see visible women's leadership, bold and fierce, going up against a very racist, sexist, misogynist administration, it gives you a different level of courage that you may not have felt you had," she said.

Some celebrities, including actress Alyssa Milano, who was the one to launch the viral hashtag #MeToo on Twitter, emboldening women to share their experiences of sexual harassment, are among Trump’s vocal critics. She stood up for the “Dreamers” program, a nickname for the Deferred Action for Childhood Arrivals, created under Barack Obama’s administration, offering protection for illegal immigrants brought to the United States as children. It appeared to be an apple of discord that led to the government shutdown.

You didn’t need to do this.

I march for the dreamers you didn’t protect.

And the children you left vulnerable. #WhyIMarch #TrumpShutdown #PowerToThePolls #WomensMarch2018

Earlier in the day, dozens of protesters gathered in Rome to express support for the anti-harassment movement. Prominent Italian actress Asia Argento, who was among many women accusing Hollywood film producer Harvey Weinstein of sexual assault, joined the rally, saying she was there to “assess the necessity of women to speak out and change things.”

Power to the only two Italian women in my business who spoke up against predators and paid the awful consequences @MIRIANA_TREV @AmbraBattilana you are not alone, we stand with you! ✊️ #NOSHAMEFIST pic.twitter.com/mwCmaGjQBS

"Women are scared to speak and because I was vilified by everything I said, I was called a prostitute for being raped. I wonder how women who received such violence would find the courage to come out as I did, when they saw what happened to me, so I am here to assess the necessity of women to speak out and change things," she said at the rally.

The 42-year-old Argento was harshly criticized by her compatriots for not telling her story earlier.

And it's not just the United States, there are a number of events planned all over the world this weekend. This is today's Women's March in Rome, Italy for instance. #WomensMarch2018 pic.twitter.com/nTqHJzYOuu

Last year’s rally in Washington contributed to forming solidarity between those that disapprove of Trump's stance on abortion, immigration, LGBT rights, etc. About 2 million people in dozens of countries across the globe inundated the streets to march for their rights on January 21, 2017. While some protesters said they were concerned by the rhetoric of the new president and wanted to send a message to the government, others claimed that the marches shouldn't be considered anti-Trump but rather as an attempt to bring human rights issues to the light.