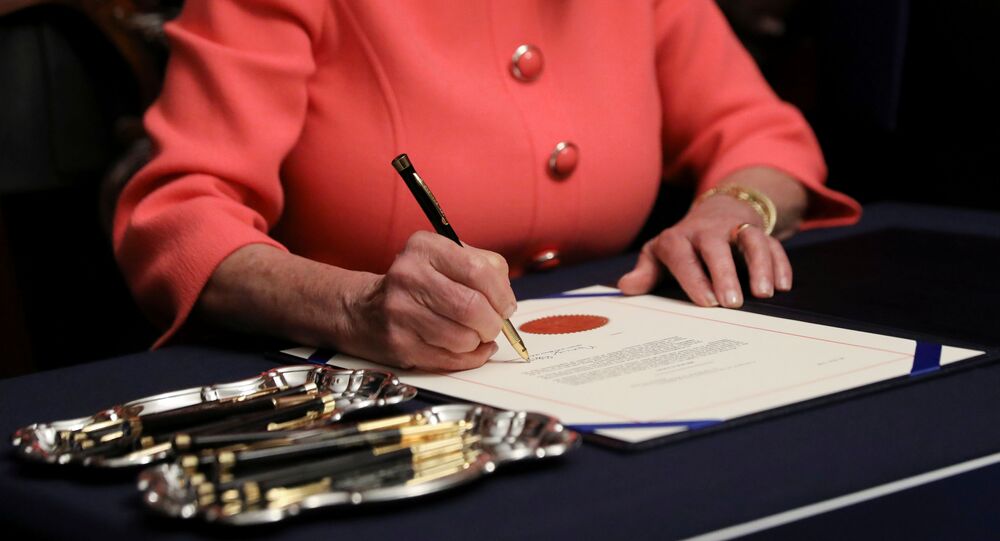 The Democratic-controlled US House of Representatives authorized sending the two impeachment charges against US President Donald Trump to the Senate, clearing the way for a removal trial to kickoff. Speaker of the House Nancy Pelosi approved a team of seven Dem lawmakers to serve as prosecutors in the upcoming trial.

Pelosi announced on Wednesday that Trump must be held accountable for his attempts to withhold funds from Ukraine "in return for a benefit that was personal and political", adding that "today we will make history”. After her speech, the top Democratic lawmaker signed the articles of impeachment and sent them to the Senate for the upcoming removal trial of the 45th US president.

Before the signing, aides brought two trays containing over two dozen pens. Pelosi picked up each one, signed and handed each one to a lawmaker as a keepsake.

The signing attracted a significant media presence and some reporters took to social media sharing details of behind-the-scenes preparations for today's high-profile event. A CNN correspondent pointed to the impressive number of pens, emblazoned with Pelosi's signature, that she used for the historic handover of the impeachment articles to the Senate.

So many pens that Pelosi will sign to officially transmit the articles of impeachment and sign resolution appointing House managers. Why so many? They will be given away to members like House managers as a symbol of today. pic.twitter.com/URHGGGGp7K

​Netizens instantly took to their keyboards, exercising their witticism, mocking and even slamming Pelosi, mostly for reckless wasting of taxpayer's money.

WhAt? What a waste of our taxpayers money!

I thought impeaching a President was solemn, sorrowful, prayerful and sad. But let's make custom pens so we have a souvenir? @SpeakerPelosi is an embarrassment.

A symbol of the day Democrats officially gutted the power of the House by trivializing impeachment into nothing more than partisan politics.
What a moment to commemorate.

This is like a Religious Ceremony for them! The worship the Idol of their own power.

​Spokesperson for The White House Stephanie Grisham also lashed out on Pelosi for the signature pens and the House speaker's demeanor.

Nancy Pelosi’s souvenir pens served up on silver platters to sign the sham articles of impeachment...She was so somber as she gave them away to people like prizes. https://t.co/RMOiNeoMu0

​Despite criticism, signing pens are a tradition among DC politicians for various celebratory occasions, considered by many to be a sign of proximity to power. Trump has also engaged in the tradition.

On 22 December 2017, Trump enacted a tax bill while US Congress was in recess and reportedly tried to give pens out to reporters after signing.

According to the US-based media reports, the 36th US president, Lyndon Johnson, pioneered the tradition. Johnson gave away framed sets of pens that he had used to sign the "Great Society" legislation that sought to counter poverty and racial injustice in the US.