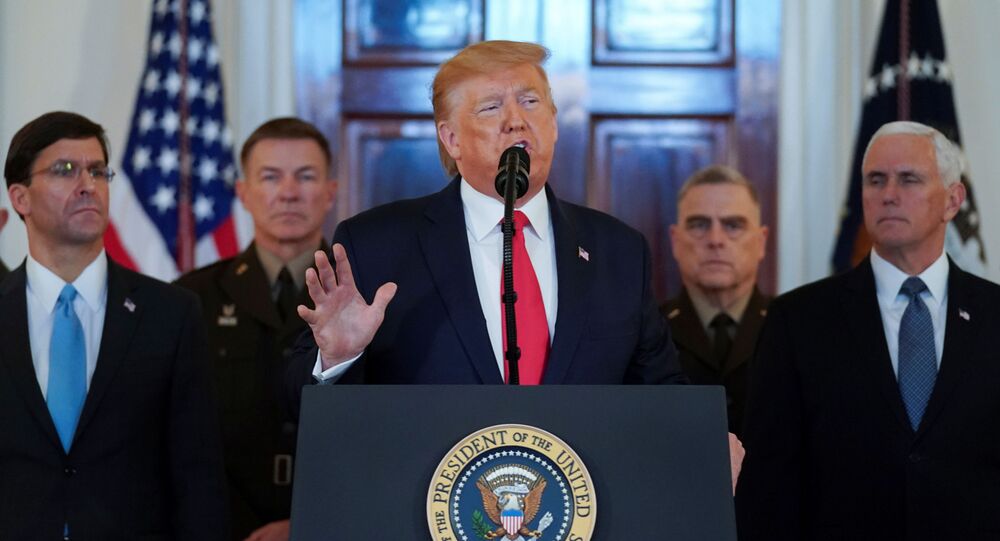 Two US military bases in Iraq were attacked early on 8 January with Iranian missiles in an act of retaliation for Washington's operation that killed Iranian General Qasem Soleimani on 3 January in Baghdad.

In his address to the nation, US President Donald Trump said that no US military personnel were hurt in the Iranian missile attack on its bases in Iraq on 8 January, while the bases themselves sustained "minimal" damage. He noted that this was due to precautions that were taken, the "dispersal of forces", and an early warning system.

The POTUS further announced that the US would impose "new powerful economic sanctions" against Iran in light of the attack against the American military bases. He added that the sanctions would remain until Iran "changes its behaviour" on the international arena. The US president stated that he would ask NATO to be "much more involved" in the process in the Middle East.

While Trump didn't explicitly promise any action against Tehran apart from sanctions over the missile attack on 8 January, he put great emphasis on the modernisation that the US military has undergone under his presidency. The POTUS namely boasted that US Armed Forces possess "big and accurate" missiles, but added that he hopes not to use them against Iran.

Instead, Trump suggested reaching a new deal with Iran that would make "the world a safer and more peaceful place", while at the same time benefiting the Islamic Republic itself.

"We want you to have a future, and a great future – one that you deserve. One of prosperity at home and harmony with the nations of the world. The US is ready to embrace peace with all who seek it", POTUS said.

Trump also commented on the US killing of Quds Force commander Qasem Soleimani, claiming that the US had information about him planning attacks for 4 January. The president added that this became the driving force behind the decision to kill the Iranian general.

The decision to assassinate the Quds Force leader, however, led to a major escalation in tensions between the US and Iran in the Middle East, as the latter vowed to retaliate for what it called a "terrible crime" and an act of state "terrorism".

The retaliation came five days later when Tehran fired dozens of missiles at military facilities in Erbil and the Ayn al-Asad Air Base in Iraq, which is utilised by US forces. Iranian Supreme Leader Ali Khamenei called the missile barrage a "slap" in the US' face and hinted that more attacks may follow. Iranian Foreign Minister Javad Zarif, in turn, called the missile attack on 8 January "legitimate self-defence" in response to the US killing of Soleimani.

Trump separately noted that the US is no longer dependent on oil from the Middle East, saying that this became possible due to progress that his country had made recently in extracting its own energy resources.

"Over the last three years under my leadership our economy is stronger than ever before. America has achieved energy independence. We are now the number one producer of oil and natural gas anywhere in the world. We are independent and we do not need Middle East oil", he said.