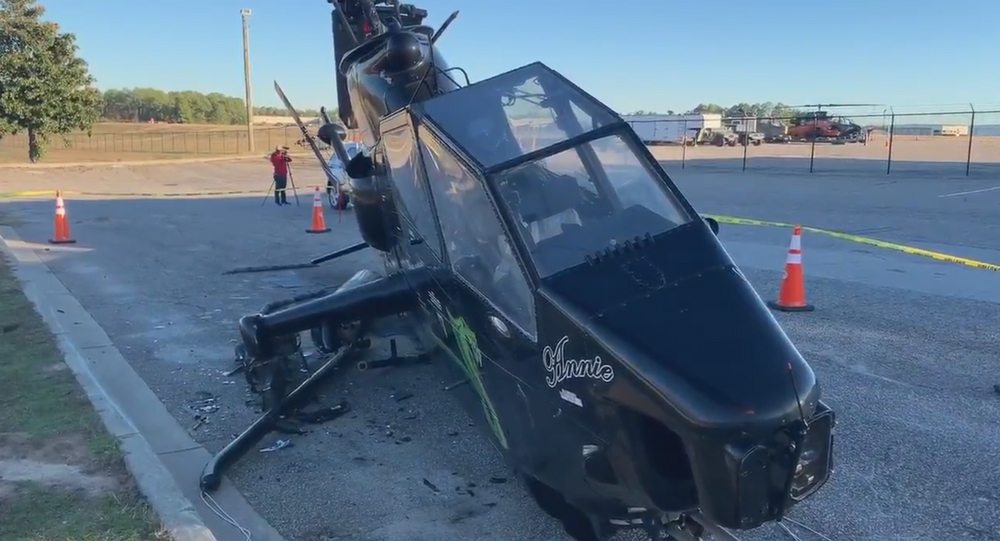 Videos: Drunk Driver Arrested After Crashing Into US Attack Chopper

A decades old, Vietnam-era attack chopper is headed to undergo restorations after a driver under the influence of alcohol veered off the highway and ran into the aircraft before fleeing the scene.

South Carolina Highway Patrol Community Relations Officer David Jones announced via Twitter on December 18 that a drunk driver was thrown behind bars after causing “about a half a million dollars” worth of damage to a fully restored 1967 AH-1F Cobra attack helicopter.

According to local Columbia, South Carolina, news outlet WLTX19 the car operated by the impaired driver swerved off Columbia Airport Expressway and crashed into both the chopper and its landing gear. A follow-up investigation by South Carolina Highway Patrol led to the alleged driver’s arrest. No injuries were reported from the collision.

Sober or slammer! The driver who wrecked into this helicopter was arrested for DUI! This holiday season, drink responsibly!!!!!!!! pic.twitter.com/8oDbGpmN01

"This holiday period, if you're going to go out to a holiday party or visit friends or family, make sure you have a plan in place if you plan to consume alcohol," the officer behind the camera is overheard saying in the video clip above. "Don't have us knocking on any more doors and, for heaven's sake, don't be like this guy."

The aircraft, nicknamed “Annie” after American-Swedish actor and entertainer Ann-Margaret for her “contributions to the morale of US Forces around the world,” was positioned on the side of the highway as part of a display by veterans charity Celebrate Freedom Foundation (CFF).

Stephen Seymour, executive director of the CFF, told WLTX that it will take a “lot of resources” from both veterans and volunteers to restore Annie to her former condition.

"Annie served in the United State's army from 1967 to 2001," Seymour, a two-time Purple Heart recipient, explained. "She did five years in Vietnam. She did the Persian Gulf war and she got taken out by a drunk driver.”

While there was no physical harm endured from the incident and little has been released pertaining to the presumed driver, the CFF’s STEM (Science, Technology, Engineering and Mathematics) education program is expected to suffer as the chopper undergoes restoration.

"It just brings back so much emotions with our Veterans who have served," Lori Wicker, director of the CFF STEM Program, expressed to the outlet, noting that Annie has visited some 150 schools and been exposed to around 100,000 students.

"They brought their grandkids to see these. We would go to schools and they're like this is a real thing. Everything they learn is school is somewhere on this helicopter. You've got your science, your engineering, your technology and your math."

"My heart hurts so bad because of all the hard work that everyone has put into this aircraft," Wicker said. "They don't make these anymore … these are our history."