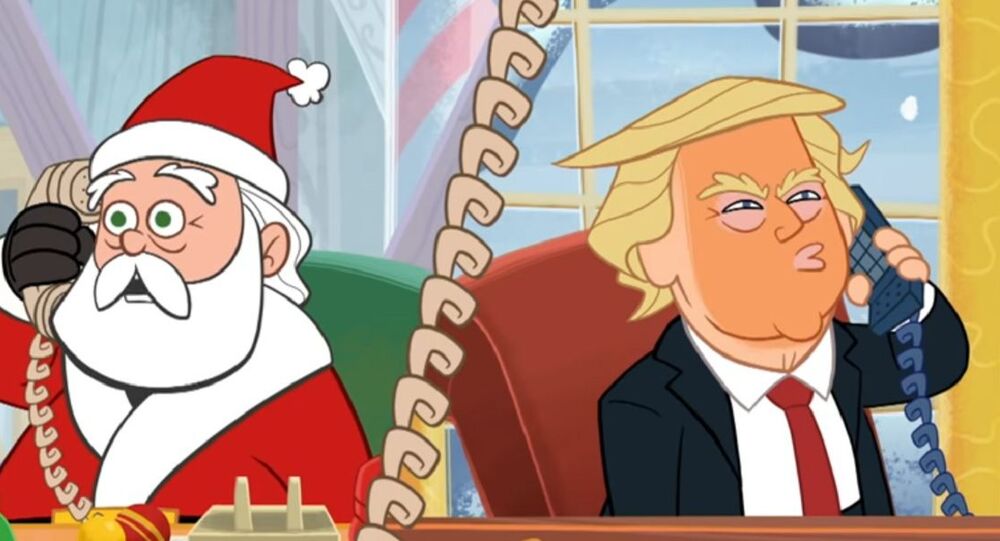 CBS 'The Late Show with Stephen Colbert' on Thursday broadcast a unique perception of the Dem-led impeachment of US President Donald Trump and this week's culmination - the historic vote in the US House of Representatives.

Colbert's crew created a short, captivating and hilarious cartoon called “Once Upon Impeachment”. The 8-minute animation "retells" the months-long story of the impeachment process against Trump in a mocking and comprehensive way, modifying the by now well-known events to a classic Christmas atmosphere and fairytale hustle.

The cartoon opens with a scene of an overburdened Santa Claus apparently answering infinite phone calls from children describing in breathless detail their festive wishes. Santa is seen promising one child 2 million likes on social media and telling another that even he has no powers to reverse climate change before an animated Donald Trump suddenly interrupts Santa's Christmas toil.

In the phone call, Trump offhandedly and disparagingly dubs Santa “Crooked Krinkle”. Santa, in turn, calmly asks his unexpected interlocutor for the “plutonium that Congress approved” to make more gifts.

Trump counters by asking Santa to “do me a favor”, an eloquent reference to his 25 July phone conversation with Ukrainian President Volodymyr Zelensky and to the anonymous whistleblower complaint alleging Trump's demand to investigate the Bidens, a request that triggered the real Dem-led investigation and impeachment inquiry earlier this year.

© REUTERS / JONATHAN ERNST
Constitution Doesn't Require House Speaker Pelosi to Forward Articles of Impeachment at Any Time – US Lawyer
The clip then takes the viewer to an animated CNN broadcast, where uncharacteristically satirical news anchor Wolf Blitzer interviews a “second whistleblower” - apparently, one of Santa's Christmas elves - about the conversation. The elf then alleges that Trump asked Santa for the “naughty and nice list” of “dirt on Joe Biden” in exchange for the “plutonium".

The cartoon features animated characterizations of certain US politicians who have made the headlines in the news during the real-life impeachment process. The satirical episode ends with a preachy statement by Santa Claus on Capitol Hill, urging everyone to look not for "who’s been naughty to you” but to seek instead someone to "be nice to".