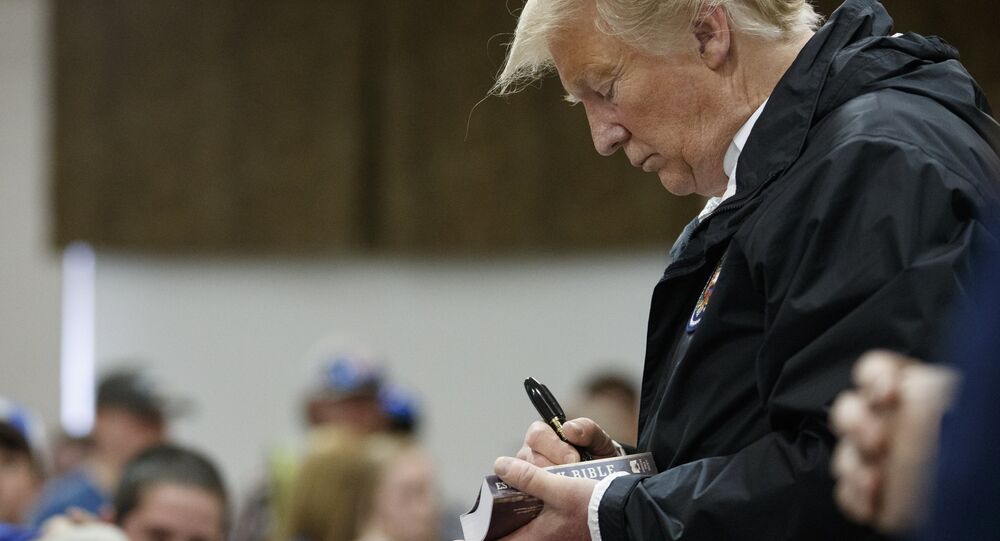 Earlier, at a Hanukkah celebration at the White House on Wednesday Donald Trump signed an executive order that will make Title VI of the 1964 Civil Rights Act apply to anti-Semitic acts, saying that the “poison of anti-Semitism” needed to be condemned and confronted everywhere and anywhere it appears.

US President Donald Trump has appeared to admit to a Bible fail, telling a room of religious leaders at a Hanukkah celebration at the White House he "may not know it very well at all", reports the Independent.

In his remarks, Trump invoked an Evangelical pastor and Fox contributor Robert Jeffress, who previously called the president a "Christian warrior" and warned that removing him from office would create a "Civil War-like fracture" in the US.

"I didn't know him, but I watched him, and I'd watch him on different shows. I said, “I like that guy. Man, he talks really great about me, and I like people that talk well about me.” He was saying, “He may not be the greatest Christian I've ever seen, he may not know the Bible quite as well as the rest of us, in fact he may not know it very well at all, but that guy's a real leader.””
© AP Photo / Carolyn Kaster
Pastor Robert Jeffress of the First Baptist Dallas Church Choir speaks as he introduces President Donald Trump sduring the Celebrate Freedom event at the Kennedy Center for the Performing Arts in Washington, Saturday, July 1, 2017

Jeffress, who heads the 13,000-member First Baptist Dallas church and is a vehement supporter of President Donald Trump, told the conservative radio program The Todd Starnes Show in October that Trump has shown that he was a defender of Christians' interests, adding:

"He is without doubt the most pro-life, pro religious liberty, pro-Israel...president we have ever had and they don't want to see this warrior removed from his place of leadership in our country."

‘Second Favourite Book’ of All Time

Trump has repeatedly shared his love for the Bible on the campaign trail as he appealed to Evangelical Christian voters.

Thus, in an August interview with Bloomberg Politics when asked if he had a favourite book of the Bible, Trump responded:

Asked whether he enjoys the Old Testament or the New Testament, Trump said:

"I joke, very much so, they always hold up the Art of the Deal, I always say, “My second favourite book of all time.””
© AP Photo / Alex Brandon
President Donald Trump smiles as pastor Paula White prepares to lead the room in prayer, during a dinner for evangelical leaders in the State Dining Room of the White House, Monday, Aug. 27, 2018, in Washington.

Trump’s comments on Wednesday came in the wake of the signing of a new White House Executive Order that mandates the application of Title VI of the 1964 Civil Rights Act to all groups and institutions purveying anti-Semitic hate.

Title 6 of the Civil Rights Act prohibits discrimination on the basis of race, colour, and national origin in programs and activities receiving federal financial assistance.

"The vile, hate-filled poison of anti-Semitism must be condemned and confronted everywhere and anywhere it appears," Trump said in a statement at a White House event to celebrate the Jewish winter festival of Hanukah.

"This is our message to universities: If you want to accept the tremendous amount of federal dollars that you get every year, you must reject anti-Semitism. It's very simple."

While organisations like the Anti-Defamation League welcomed the order, critics have warned that it is a potentially dangerous move that fuses criticism of Israel with antisemitism, violating free speech rights on college campuses, and unfairly targets the BDS (The Boycott, Divestment, Sanctions movement).