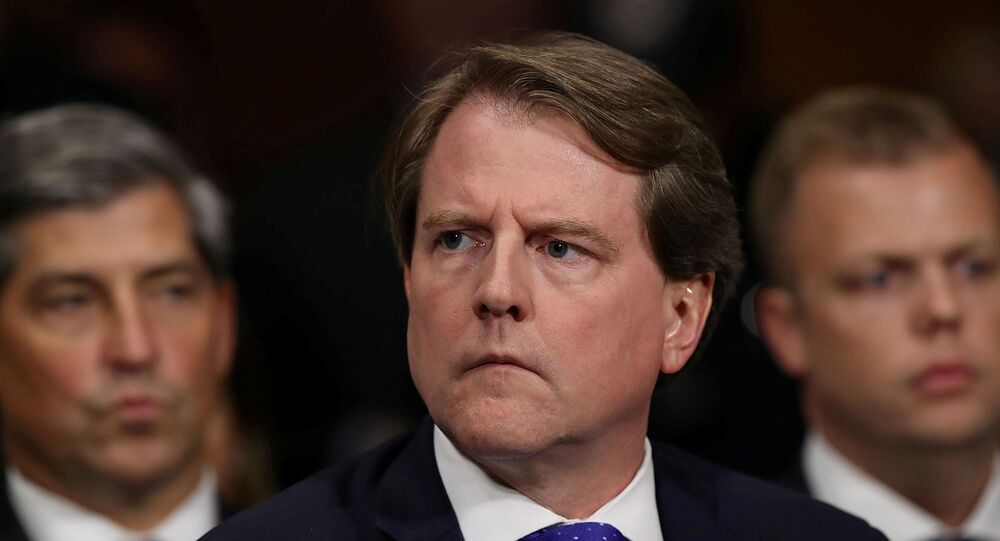 WASHINGTON (Sputnik) - A US District Court on Wednesday temporarily delayed enforcement of her ruling that former White House Counsel Don McGahn must comply with a subpoena by House Democrats for testimony in the impeachment probe of President Donald Trump, Judge Ketanji Brown Jackson ruled on Wednesday.

"Given the Court's need for time to consider the merits of DOJ's motion for stay pending appeal, it is hereby ordered that the Court's 26 November 2019 Order administratively stays", Jackson wrote.

Jackson said the temporary stay will allow her to consider a longer delay requested by the Justice Department to appeal her Monday ruling to the Appellate Court forcing McGahn's testimony.

The Judiciary Committee opposed a Justice Department motion to stay Jackson's ruling throughout the appeals process. But as a 'courtesy to this Court', the committee consented to an administrative stay of seven days, Jackson wrote.

Trump has ordered his staff not to cooperate with a House investigation, which is seeking evidence of presidential wrongdoing sought by many House Democrats, who are calling for impeachment.

The Trump administration has the option of appealing Jackson's ruling all the way to the Supreme Court, making it unlikely the dispute over McGahn's cooperation with Congress will be resolved during a House push to wrap up the impeachment inquiry before the New Year.