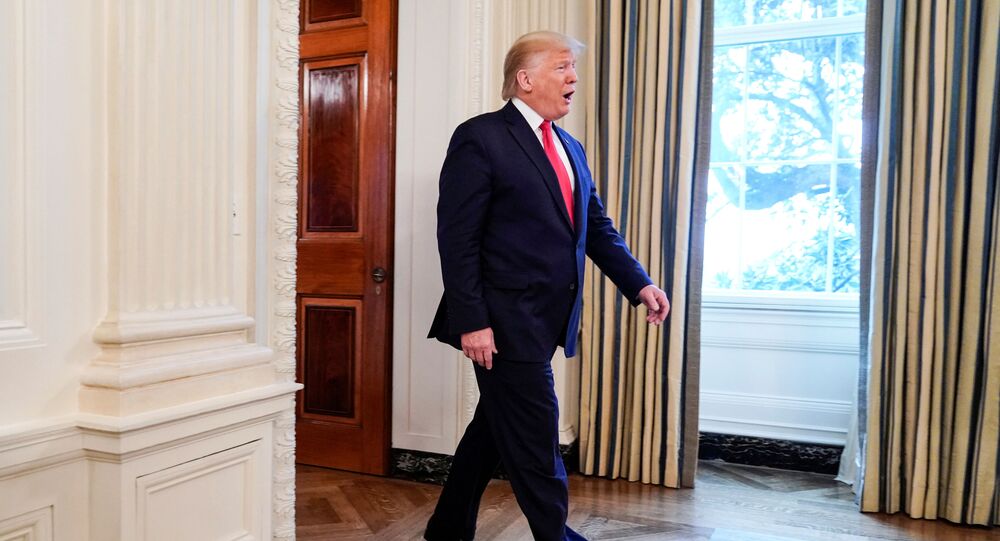 The impeachment inquiry against the US President marched forward on Tuesday as the House Judiciary Committee announced its first hearing next week, featuring constitutional scholars testifying on what impeachable conduct is, inviting Trump’s legal team to participate in questioning witnesses.

US President Donald Trump had already been briefed regarding a whistle-blower’s complaint about his dealings with Ukraine when he unfroze military aid for that country in September, according to two people familiar with the matter, reported The New York Times.

In a new twist to the impeachment saga, lawyers from the White House counsel’s office reportedly informed Trump in late August about the complaint, claim the sources.

A whistle-blower complaint would typically be submitted to lawmakers who have oversight of the intelligence agencies.

Michael Atkinson, the inspector general for the intelligence community, concluded in late August that the administration needed to forward the complaint to Congress.

However, White House counsel Pat A. Cipollone and his deputy John A. Eisenberg decided the administration could withhold the accusations from Congress because they were protected by executive privilege, writes the publication.

The lawyers allegedly explained to the president they planned to ask the Justice Department’s Office of Legal Counsel whether they were duty bound to disclose the complaint to lawmakers.

A week later, the Office of Legal Counsel concluded that the administration did not have to hand over the complaint.

At this point, it is not clear how much detail the lawyers provided Donald Trump about the complaint.

The US President has not yet commented on the report.

The fresh revelations reflect on two aspects which have prompted impeachment investigators: Trump’s decision in early September to release the security assistance to Ukraine, and his denial to Gord-on D. Sondland, the United States ambassador to the European Union, around the same time, that there was a “quid pro quo” with Kyiv.

The new timing detail seems to suggest the US President was aware of the whistle-blower, whose identity has not been made public, having accused him of wrong-doing in Ukraine.

He allegedly  the aid and in his broader moves to allegedly pressure Ukrainian President Volodymyr Zelensky to investigate potential corrupt activities by former Vice President Joe Biden and his son Hunter – a charge Trump has denied.

Earlier in September, The New York Times reported that White House advisers Cipollone and Eisenberg were aware of the whistle-blower complaint in August, yet there had been no information regarding how and when the US president learned of it.

Several diplomats and national security officials have testified that the aid freeze to Ukraine had generated discord at the State Department, the Defense Department and the National Security Council, where top officials were reportedly concerned about the legal implications of denying money allocated by Congress, reported the The New York Times.

Two officials at the White House budget office resigned this year in part due to purported concerns over President Trump’s decision to delay the security assistance, a third aide at the office told impeachment investigators.

Mark Sandy, an official at the White House Office of Management and Budget, told the House Intelligence Committee in a private interview on 16 November that one of the officials “expressed some frustrations about not understanding the reason for the hold” before resigning in September.

A second co-worker, an official in the legal division of the office, also resigned after offering a “dissenting opinion” about whether it was legal to hold up the aid, according to a transcript of Sandy’s testimony released by the committee on Tuesday.

The House Intelligence Committee released the transcript of the testimony as Democrats were pushing forward with the next phase of their probe.

On Tuesday as the House Judiciary Committee announced its first hearing next week and invited Trump’s legal team to participate.

The chair of the House Intelligence Committee, which is heading the impeachment inquiry into the US President, said in a Monday letter the committee would submit its first report to the Judiciary Committee after the Thanksgiving holiday recess.

Adam Schiff has also said that the investigation will continue even after the publication of the report containing the case for the president's impeachment, ruling out further depositions or public hearings.

In September, House Democrats initiated an impeachment probe after a whistle-blower alleged that Donald Trump had abused the power of his office in a 25 July phone call with Ukraine’s President Zelensky, supposedly pressuring him to pursue a probe into former vice president Joe Biden and his son, Hunter Biden, claiming that the US president had withheld nearly $400 million in military aid, seeking a "quid pro quo" arrangement with Kiev - a charge Republicans deny.

They have also argued that the funding’s eventual release proves that Trump did nothing wrong.

A previous anti-corruption probe that investigated Burisma Holdings, a gas company on the board of which Hunter Biden sat at the time, was shut down due to pressure from the elder Biden in 2016.

Trump promptly declassified what the White House claims is the full, unedited transcript of his telephone call with Zelensky, as he insisted there was nothing wrong in his dealings with Ukraine.

The US President has denied all accusations levelled against him, and insisted he was withholding the security assistance to Ukraine out of concern for corruption in that country and a desire to have other countries pay their fair share.

Trump has repeatedly slammed the impeachment inquiry as a political "witch hunt" by Democrats.