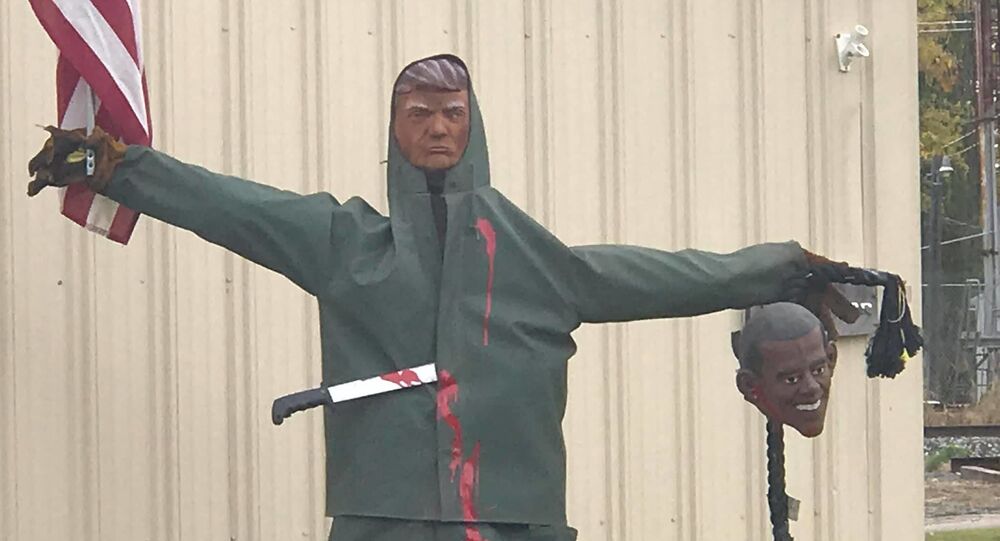 A Michigan auto shop owner who decorated his business with a gruesome political display some labeled racist is now admitting he possibly “went too far” after he was ultimately taken to task by locals and netizens alike.

While some people carve a couple pumpkins for their Halloween decorations, Dave Huff, a pro-Trump business owner of Quality Coatings from Livingston County, Michigan, decided to go the political route this season.

The Halloween decor depicted US President Donald Trump with a knife that was presumably used to sever the head of his predecessor, Barack Obama, whose head was hanging from a rope in Trump’s hand.

“How is this ok? I am disgusted this is in my hometown. Way to display your ignorance. Democrat or Republican this is just wrong. At least I know who not to do business with,” she said Thursday evening in her post.

"He’s getting a little carried away with it, especially when he had Obama’s head hanging on a noose," Robert Feeney, a resident who lives across from Quality Coatings, told the Detroit Free Press.

Though the majority of the outrage centered around the sight of the coiled rope alluding to a lynching of the former president, the full display shows Trump also standing on the severed head of his 2016 presidential race opponent, former Secretary of State Hillary Clinton.

“This is disgusting. Certainly not representative of the majority of people in Fowlerville,” Mary Vielbig said in the comment section of DeTroyer’s post. “My family has done lots of business here in the past. Those days are done!”

However, not everyone is against the auto shop owner. Renee Koch, another woman from the area, denounced the display as “dumb,” but also suggested those in the community “be bigger than this and just say that wasn't a great idea and move on.”

“I'm guilty of using this POS platform myself where words I write can damage and hurt. Done with it,” she said before doubling back to say, “remember karma can be a real b***h.”

The Free Press noted that Huff had revamped his display by Friday and completely removed Obama’s head from the display. Rather than standing on Clinton’s head, Trump is now depicted with a headband and sash that read “PC POLICE.”

"It was a Halloween decoration that I guess went too far," he said to the outlet on Sunday. Despite the overwhelming amount of Trump-themed pumpkins - one of which proudly said “Trump 2020” - Huff admitted he is not an active voter, nor did he vote in the 2016 presidential election.

"I don’t support anyone. I’ve never voted for anyone other than myself,” Huff argued, saying he did not favor one candidate over the other.

The change in decor and owner’s “apology,” however, did little to change DeTroyer’s mind. In fact, the resident argued the updated version of the display reveals the intent behind the initial decoration.

“Yes he apologized for offending people and Halloween is supposed to be scary. Then if it was about Halloween then why put PC police on it?” she asked under her original post, to which Kevin Copeland responded, saying “he’s given the middle finger to the town twice now.”