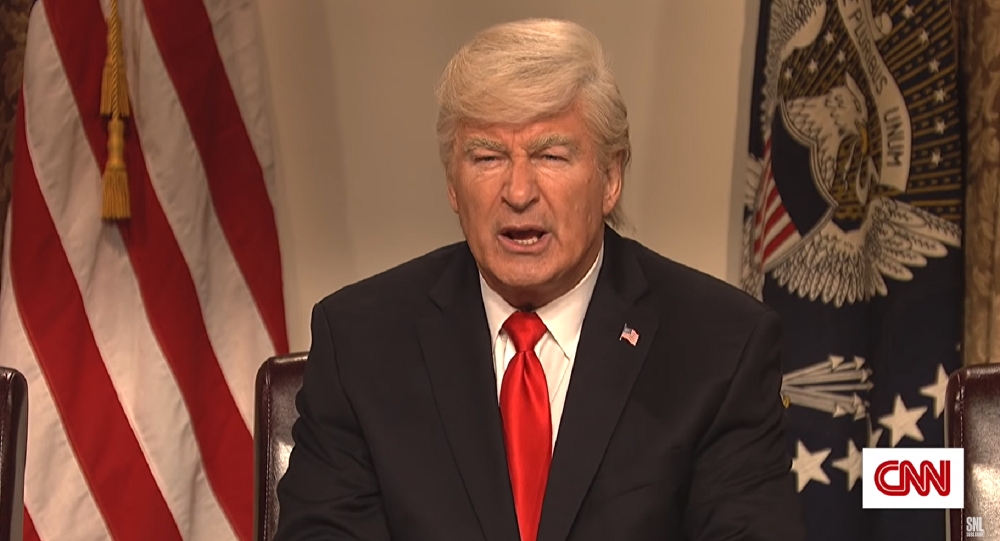 Just before President Donald Trump’s announcement that US Special Forces had killed the elusive Daesh leader, the TV comedy team who’ve made countless parodies of POTUS added one more to the list when they decided to blast him for the decision to pull troops out of war-torn Syria.

Alec Baldwin and Pete Davidson presented a sketch mocking Donald Trump’s policy in Syria, hinting it might play into the hands of terrorists, in the latest episode of “Saturday Night Live” that aired right before the announcement about eliminating Daesh* leader Abu Bakr al-Baghdadi.

As Fox News points out, as the parody aired, US Special Forces were carrying out a raid on the top terrorist’s hideaway in the Syrian province of Idlib that culminated in his death.

In the sketch, mocking one of the American president’s rallies, SNL’s brand Trump, Alec Baldwin, is pictured greeting crowd members. When one of them, played by comedian Pete Davidson dressed in black, ascends the podium, Trump\Baldwin asks him: “Where are you from? New Mexico?”

Davidson fires back, merrily shouting “ISIS! Yeah, I was a prisoner in Syria until last week when you freed me”. This was apparently a reference to the escape of Daesh affiliates from a Syrian prison amid a Turkish operation, launched after Trump announced the withdrawal of US troops earlier in October.

“I just wanted to say, thank you for bringing jobs back to ISIS and I promise that I will make ISIS great again!” the black-clad audience member said.

The SNL Trump reacted in the US president’s distinctive manner, saying: “Terrific. What a great guy. ISIS is back in a big, big way, folks. And we love that, don’t we?”

The show came out hours before Donald Trump announced that al-Baghdadi had been hunted down in Syria's Idlib after touting the big news on Twitter writing that "something very big has just happened" on Saturday night. Although POTUS thanked Russia, Iraq, Syria, and Turkey for their assistance, Russian military officials said they do not possess any reliable data on “US servicemen conducting an operation that led to 'yet another' elimination of the former Daesh leader”.

The Russian Defence Ministry also stated that they are unaware of providing assistance to any US air units entering the airspace over the Idlib de-escalation zone during that mission, while Trump claimed that the Russians had opened up the area so American forces flying through certain Russian-controlled areas could reach their target.