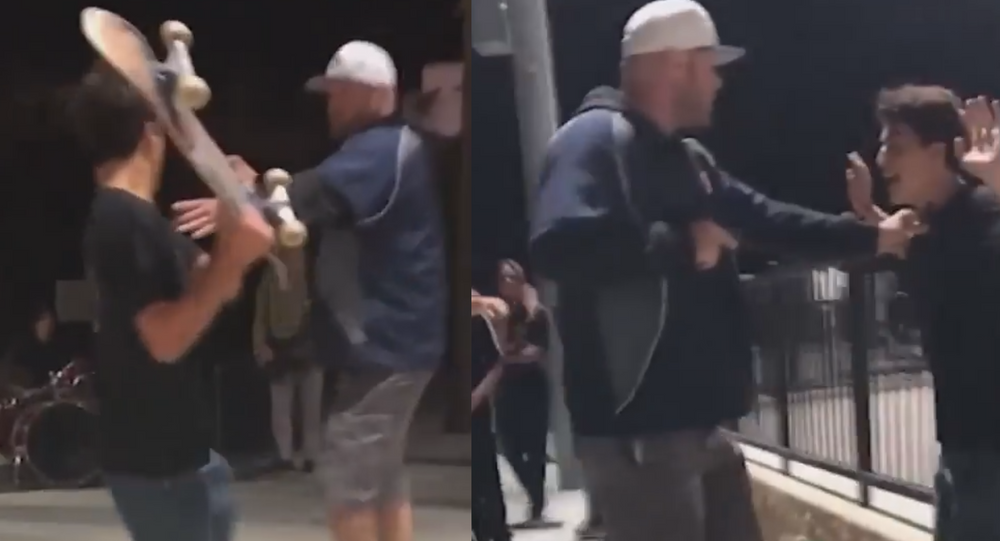 An Orange County Sheriff’s Department investigator is now the subject of an internal investigation and has been placed on administrative leave after allegedly brandishing his firearm at a teen during a recent dispute.

A dispute over loud music at a San Clemente, California, skate park quickly escalated Saturday evening after an off-duty member of Orange County Sheriff’s Department threatened to shoot a teen “in the f**king face” during a heated confrontation.

The off-duty law enforcement official, who has not been identified by the sheriff’s department, is seen in camera footage of the incident approaching and grabbing a teen, who responds by raising a skateboard while backing up. The man then continues to advance toward the boy and attempts to grab him one more time before brandishing what witnesses say was - and appears to be - a firearm. The teen responded by putting his hands in the air and complying with the investigator’s instructions.

“The guy thought he was about to hit him with the board, so he pulled out the gun,” Logan Plier, a witness at the skate park, told KTLA.

While the investigator did flash his badge, his fingers covered most of the emblem in the recording. Koa McClung, who was at the park with two of his siblings at the time of the incident, told KCBS that he thought the badge was fake, considering how briefly it was shown.

McClung added that once the man brandished his weapon, he then said, “I’ll shoot you in the f**king face if you don’t stop.”

According to Nathan Scott, another teen who was at the skate park, the situation all started due to the man’s displeasure with a live band that was performing that night.

“He’s like, my son can’t focus while playing baseball. Everyone started laughing and making fun of him,” Scott said to KTLA. Despite having made jokes at the man’s expense, witnesses claim they agreed to keep the noise down prior to the escalation.

The unnamed investigator has been placed on administrative leave following the incident.

“Orange County Sheriff’s Department employees are expected to conduct themselves with professionalism on and off-duty,” the department said in a statement concerning the investigator’s alleged abuse of power. “We take this incident seriously and will fully investigate.”

Results of the sheriff’s department’s internal investigation will be handed over to the Orange County District Attorney’s Office upon completion.