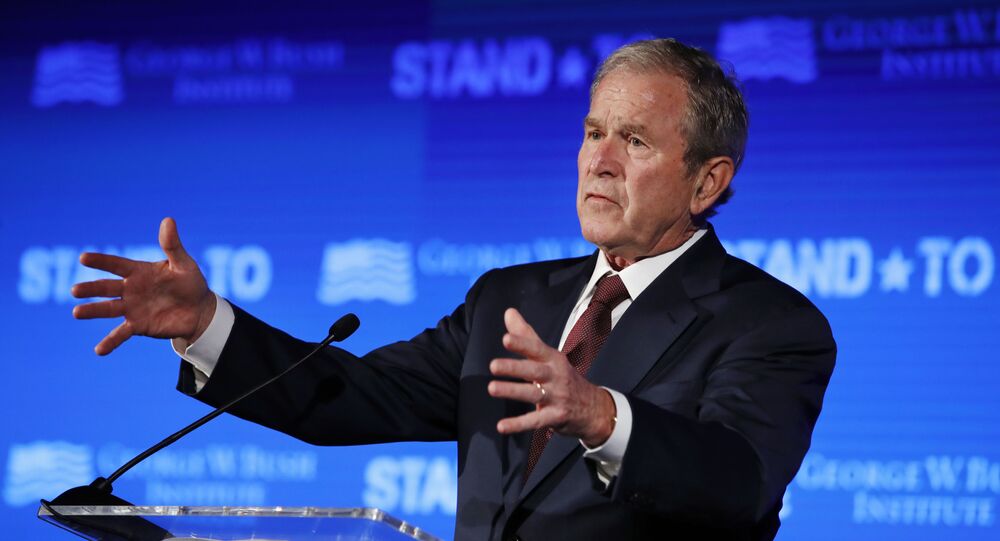 Former president George W. Bush has reportedly been reminiscing on his tenure amidst the current developments, following President Donald Trump’s decision to withdraw US troops from eastern Syria, which allegedly paved the way for Turkey to launch Operation Peace Spring against Kurdish forces in the region.

Former President George W. Bush launched a broadside at President Donald Trump on Wednesday night, reportedly claiming that “an isolationist United States is destabilising around the world”, according to the Washington Post‘s Josh Rogin.

Speaking during a panel alongside former president Bill Clinton at the Nir School of the Heart, Bush was said to have lambasted Trump for his recent decision to withdraw up to 1,000 American troops from northeast Syria as part of campaign promises to bring troops home after more than a decade of war, saying:

“An isolationist United States is destabilising around the world. We are becoming isolationist and that’s dangerous for the sake of peace.”

George W Bush takes a direct shot at Trump: “An isolationist United States is destabilising around the world. We are becoming isolationist and that’s dangerous for the sake of peace.”

According to Rogin, Bush also revealed that his biggest regret during his tenure as president from 2001 to 2008 was not granting amnesty to the 11 to 22 million illegal aliens living in the US, in what seemed like an attack against the Trump administration’s drive to enforce immigration laws.

“We are a nation of immigrants but the language coming out of the system today is rejecting immigration,” Bush said.

GW Bush says his biggest regret is failing to do comprehensive immigration reform with Congress. “We are a nation of immigrants but the language coming out of the system today is rejecting immigration.”

As President, in the aftermath of the 11 September 2001 terrorist attacks on the US, Bush led America into war in Afghanistan and Iraq, with more than 4,500 Americans dying in Iraq, including more than 3,500 killed in combat, and up to 205,000 Iraqi citizens dying in the war since March 2003, according to antiwar.com.

Today, an overwhelming majority of US veterans and voters believe Bush’s wars in Afghanistan and Iraq were “not worth fighting”, according to the latest Pew Research Center survey.

Nearly six-in-ten voters say the US military intervention in Syria is not worth fighting or risking American lives on.

George W. Bush’s current statements come in the wake of Donald Trump’s decision to withdraw troops from eastern Syria, perceived as delivering on his campaign pledge to bring home US troops from Syria and to negotiate an exit from Afghanistan after almost two decades of war. He said in his State of the Union address in February 2019 that “great nations do not fight endless wars.”

Trump first announced in December 2018 that the more than 1,000 US troops in eastern Syria would soon be departing, claiming that Daesh had been defeated.

Last week Trump began the removal - first, a small number from the Syrian-Turkish border, to be followed by the remainder of forces shortly thereafter.

The decision sparked a display of bipartisan unity on 16 October, as the US House of Representatives voted by a large majority to condemn Donald Trump's decision to withdraw troops from eastern Syria, as well as the Turkish incursion there that quickly followed.

The House voted 354-60 to approve House Joint Resolution 77, expressing the lower house of the US legislature's opposition to Trump's withdrawal of US troops from eastern Syria and the subsequent operation against Kurdish forces there by the Turkish military.

Turkey's operation in northern Syria has frustrated NATO allies, with the Trump administration imposing sanctions against Turkish officials and entities on 14 October.