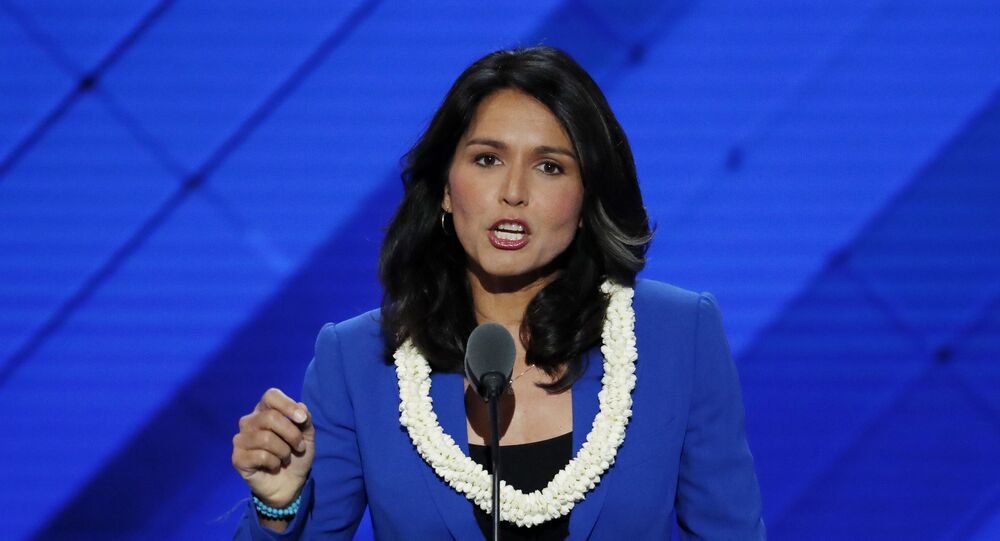 Last week, Hawaii congresswoman and 2020 presidential candidate Tulsi Gabbard threatened she was “seriously considering” boycotting the Ohio Democratic presidential debate over claims that both the Democratic National Committee and the “corporate media” were meddling in the election process.

US 2020 Democratic presidential candidate Rep. Tulsi Gabbard (D-HI) accused The New York Times and CNN of "smearing" her reputation at the Democrats' 2020 primary debate on 15 October.

"The New York Times and CNN have also smeared veterans like myself for calling for an end to this regime-change war," she said at the event in Westerville, Ohio, that CNN was co-hosting with The Times.

Gabbard, 38, had been questioned about Syria, where US President Donald Trump recently ordered the withdrawal of US troops from the country's north.

"Just two days ago, The New York Times put out an article saying that I'm a Russian asset and an Assad apologist and all these different smears. This morning, a CNN commentator said on national television that I'm an asset of Russia -- completely despicable."
Gabbard was seemingly referring to CNN analyst Bakari Sellers' comments describing the congresswoman as a "puppet for the Russian government".

The congresswoman was also vocal on the situation following Trump’s withdrawal from northern Syria:

"Donald Trump has the blood of the Kurds on his hand[s], but so do many of the politicians in our country from both parties who have supported this ongoing regime-change war in Syria that started in 2011, along with many in the mainstream media who have been championing and cheerleading this regime-change war," she said.

Democratic House Representative for Hawaii Tulsi Gabbard was widely condemned by Democrats and Republicans for holding an unannounced meeting with Syrian President Bashar al-Assad back in 2017 during a “fact-finding” trip to the Middle East country.
Gabbard claimed to have no regrets about meeting with Assad, telling CNN’s Jake Tapper on “State of the Union” in January this year that she had also witnessed the plight of the Middle East firsthand and “the cost of war”.

Earlier, the congresswoman and Iraq War veteran, who qualified for the fourth showdown with 12 of the remaining 18 Democratic presidential candidates, threatened to boycott the Democratic presidential debate on 15 October, over claims that both the Democratic National Committee and the “corporate media” were interfering with the election process, “rigging” the primary battle against many of the lower tier candidates and political outsiders running for nomination.

“I am seriously considering boycotting October 15 debate to bring attention to DNC/corporate media’s effort to rig 2020 primary,” she tweeted at the time.

In an accompanying video on 10 October, Gabbard pointed what she called “arbitrary” and non-transparent requirements to qualify for the debates, claiming the Democratic Party leaders “are trying to hijack the entire election process”.

However, in the end Gabbard decided the nationally televised prime time event was worth attending.

“I will be attending the debate,” the White House hopeful tweeted Monday morning.

I will be attending the debate.

As the Democratic National Committee has been raising the thresholds to qualify for the ensuing rounds of debates, there has been a chorus of criticism by many of the lower tier candidates.

To make the stage for the November debate, candidates have to reach 165,000 campaign contributions from unique donors and hit at least 3 per cent in four polls approved by the DNC.

Only eight candidates – to date – have qualified, and Gabbard is not one of them.