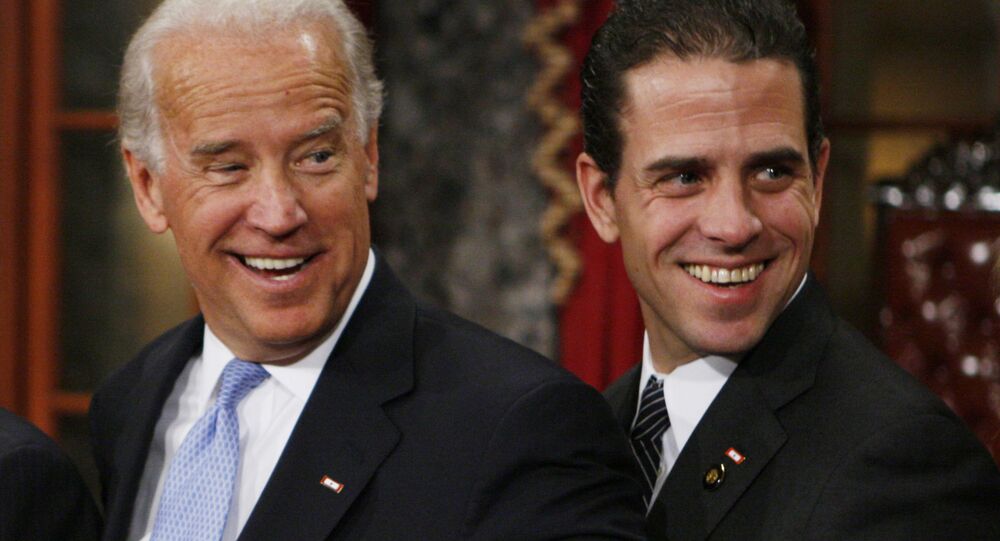 The Biden family has been the subject of a scandal in light of allegations that Joe Biden pressured the former Ukrainian administration into terminating a criminal probe into his son Hunter over the gas company Burisma’s corruption schemes. The scandal erupted as Joe Biden is trying to secure the Democratic nomination for the 2020 election.

In an interview with ABC News, son of Democratic primary favourite and former vice president, Hunter Biden has denied any wrongdoing in his job on the board of directors of Ukrainian gas firm Burisma and once again confirmed that he had no substantial conversations about it with his father, Joe Biden.

"I joined a board, I served honourably. I did -- I focused on corporate governance. I didn't have any discussions with my father before or after I joined the board as it related to it, other than that brief exchange that we had", he stated.

He also dismissed the claims that he lacked competence to be on the firm's board, noting he probably had more knowledge in the gas sphere than the rest of its members. Hunter still admitted that his name could have played role in him being invited to it.

At the same time, he acknowledged that he had made a mistake by joining the company and added that he never expected it to cause so much trouble for his father's political endeavours.

"In retrospect, look, I think that it was poor judgment on my part. I gave a hook to […] do some harm to my father. That's where I made the mistake. Did I do anything improper? No, not in any way. Not in any way whatsoever", Hunter Biden said.

Hunter Biden also took the opportunity to scold Donald Trump and his family over accusations against his father Joe, calling the US president and his relatives an "unethical group of people " and adding they came straight from a "B movie".

The former vice president's son also responded to Trump's allegations that he is hiding somewhere until the Ukrainian scandal ends by saying he is actually living a normal person's life.

Joe Biden, who is currently running for the Democratic nomination for the 2020 presidential election, was hit by a scandal after allegations surfaced that he used his status as vice president under Obama to force former Ukrainian President Petro Poroshenko to drop a criminal investigation against his son. The latter was the subject of a probe into a Burisma corruption case, which was dropped after Poroshenko sacked Ukrainian prosecutor Shokin, who ran it.

A big scandal at @ABC News. They got caught using really gruesome FAKE footage of the Turks bombing in Syria. A real disgrace. Tomorrow they will ask softball questions to Sleepy Joe Biden’s son, Hunter, like why did Ukraine & China pay you millions when you knew nothing? Payoff?

At the same time, this scandal is linked to Democrats' impeachment efforts against POTUS, which were initiated in light of a whistleblower complaint, claiming that Trump pressured the current Ukrainian president into investigating allegations against the Bidens. The US president denies the accusations and claims he had a “pitch perfect” conversation with his Ukrainian counterpart.

Trump insists that instead of probing his talks with Ukrainian President Zelensky, a transcript of which has already been released, Congress must look into Joe and Hunter Bidens' alleged crimes.

Has He Been Found? Hunter Biden Steps Down From Chinese Firm Amid Criticism From Trump