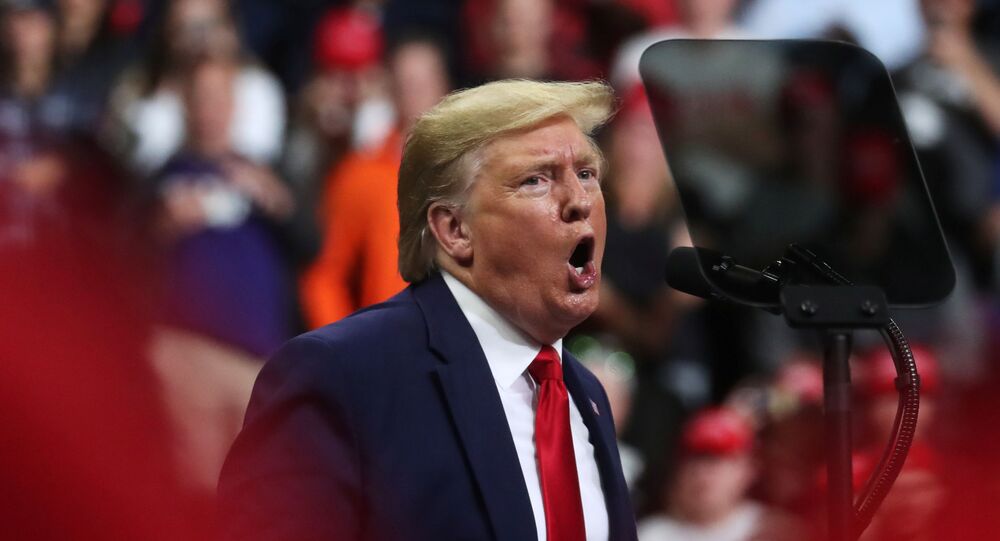 US President Donald Trump took his dialogue to another level on Thursday evening in criticizing Democratic presidential nominee Joe Biden and an impeachment inquiry launched by the Dems over Trump's notorious July phone call with Ukrainian President Volodymyr Zelensky.

At a rally in Minneapolis Trump brought supporters to their feet by claiming that Biden's only useful feature as US vice president was his ability to "kiss Barack Obama's a**".

Trump slammed Biden for allegedly pressing Facebook and major television networks not to cover alleged corruption in regard to his tenure as US vice president.

"The Bidens got rich and that is substantiated while America got robbed [...] Sleepy Joe and his friends sold out America [...] And in a brand new report, just came out as I'm walking on the stage, it turns out that when Joe Biden was vice president - he worked with the so-called whistleblower. This is nothing more than a partisan witch hunt, sabotage, and I'm sure they're going to say, 'totally unsubstantiated'", Trump said.

Trump fired back after the publication of a new story in The Washington Examiner suggesting that the whistleblower at the centre of the Trump impeachment inquiry allegedly worked with Biden.

The whistleblower's attorney, Mark Zaid, acknowledged that his client had "contact" with current presidential contenders "from both parties", according to the media report.

The Democrat-controlled House of Representatives has launched its long-awaited impeachment inquiry over allegations that Trump, in an attempt to boost his 2020 re-election bid, pressed Zelensky to probe the business activities of Biden's son Hunter in Ukraine in the July phone talk. House Dems allege that Trump threatened to withhold financial aid to Ukraine unless Zelensky did him that favor.

The White House has declassified what it claims is an un-redacted transcript of the phone conversation.

The transcript revealed that the US president asked Zelensky to work with his personal lawyer and the US attorney general to "look into" whether Joe Biden, who "went around bragging that he stopped the prosecution", committed crimes alongside his son in Ukraine. The transcript did not contain signs that the US president overtly threatened to withhold financial assistance to Ukraine.

Trump earlier said that the investigation into his telephone call with Zelensky as a "political witch hunt".