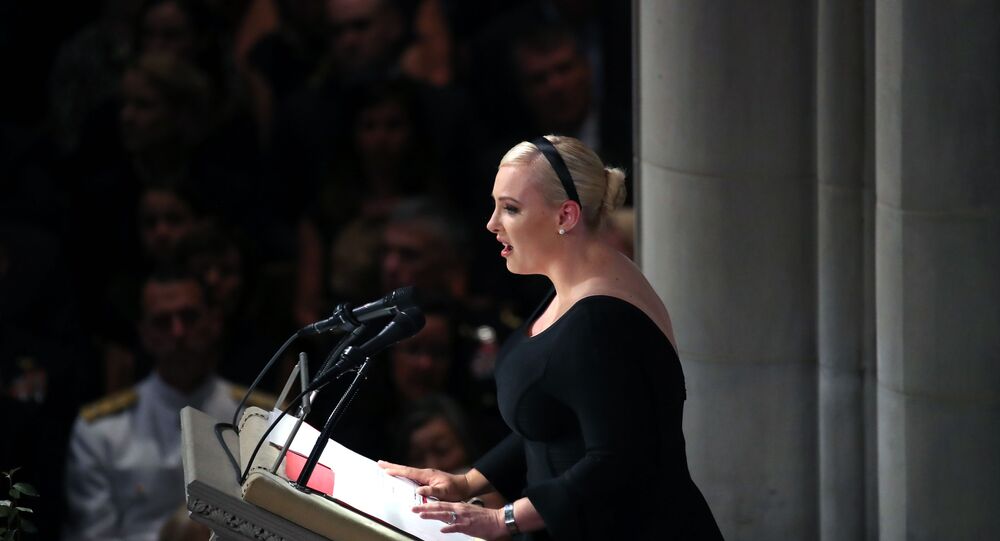 The US President announced on 7 October that Washington was withdrawing its forces that are deployed with Syrian Kurds in northern Syria, leaving Ankara free to move ahead with a long-planned military operation there, with Donald Trump’s decision drawing backlash from leading Republicans on Capitol Hill.

Meghan McCain, the daughter of the late Republican US senator John McCain, who lost to Obama in the the 2008 presidential elections, has lambasted US President Donald Trump's decision to withdraw troops from Syria, branding the White House and Republicans "feckless, unpatriotic cowards" for what she termed an abandonment of allies in the region.

Speaking on Monday's edition of "The View" on ABC, she said:

"I've been so mad this morning and so upset about this news that we are abandoning our Kurdish allies in the Middle East."

As she warned viewers that she was going to "go rogue", McCain emphasised that the United States had armed the Kurdish fighters, and was now saying they were to be abandoned.

"To everyone in the White House and every Republican who was mad that President Obama pulled out of Iraq, you feckless, unpatriotic cowards. I cannot believe this is where we're at diplomaticwise. What message is this sending to our allies who have fought alongside us and American troops who have fought and died for this?" raged McCain.

McCain’s words echoed public criticism from GOP senators, who have urged Trump to reconsider his decision regarding a withdrawal of US troops from northern Syria.

"This betrayal of the Kurds will also severely harm our credibility as an ally the world over. President Trump should rethink this decision immediately," Sen. Pat Toomey (R-PA) said in a statement.

"No matter what President Trump is saying about his decision, it is EXACTLY what President Obama did in Iraq with even more disastrous consequences for our national security," Graham tweeted.

​Previously, on 7 October, President Trump reiterated that it was time to pull the United States out of "these ridiculous endless wars" while warning Turkey in a post on Twitter he would "totally destroy and obliterate the economy of Turkey" if the country does anything he considers "off limits".

​Trump underscored the massive funding the Kurds had received from the United States, claimed that Daesh* has been defeated, and signalled it was time for the US to pull American forces out of Syria.

Ankara Geared for Operation in Syria

Turkish President Recep Tayyip Erdogan announced on 5 October that Ankara may launch a military operation in Syria shortly to clear the border area from Kurdish fighters.

Turkey's defence ministry tweeted on 7 October that "all preparations for the operation have been completed", adding that the establishment of such a zone was "essential" for Syrians and for peace in the region.

​Turkey has been seeking to push back from its border members of the Syrian Kurdish militia known as the People's Protection Units (YPG), which they view as an affiliate of the banned Kurdistan Workers' Party (PKK), which has fought for Kurdish autonomy in Turkey for three decades.

The YPG dominates the alliance of Kurdish and Arab militias called the Syrian Democratic Forces (SDF), which was instrumental in defeating Daesh (ISIS).

Ankara says it seeks to establish a 32 km (20-mile) deep "safe zone" along the Syrian side of the border clear of Kurdish fighters.

The SDF has claimed it has been "stabbed in the back" by the US, and warns that a Turkish offensive will create a "permanent warzone".

Earlier on Monday, Turkish combat planes reportedly delivered an airstrike against a military base hosting Arab-Kurdish units of the Syrian Democratic Forces (SDF) in Hasakah province in northeastern Syria.