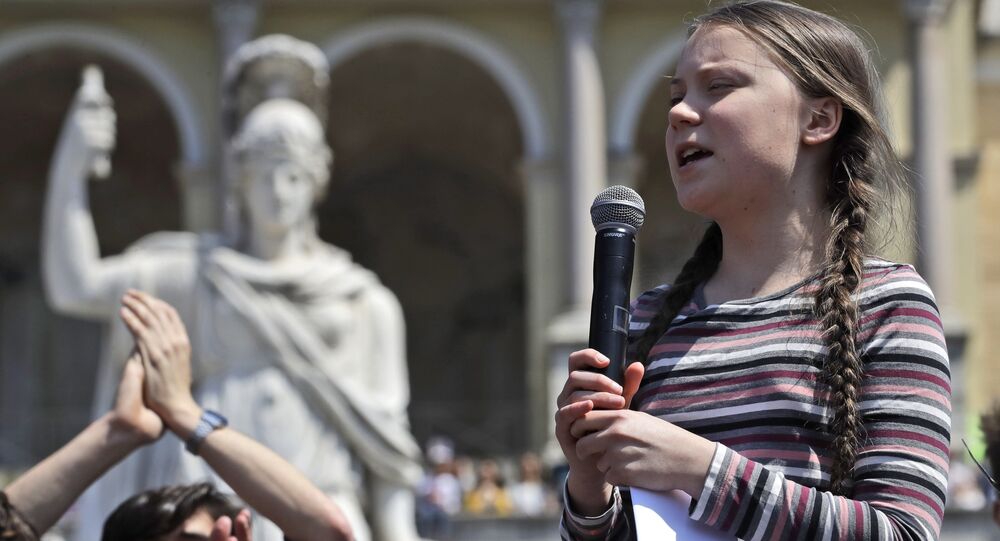 While US First Lady Melania Trump, White House aide Ivanka Trump, German Chancellor Angela Merkel, and other leaders often seem to be charmed by the Canadian head of government, the new environmentalist star has not fallen for his charisma and scolded Justin Trudeau after their meeting.

Swedish teenager Greta Thunberg, who sparked debate with her now viral angry-toned “How Dare You?” address to world leaders and politicians in New York, travelled to Canada where she privately met Prime Minister Justin Trudeau before taking part in a mass climate protest in Montreal. After a 15-minute-long meeting, the young environmentalist was asked if she had a message for the Canadian PM.

"My message to all the politicians around the world is the same: just listen and act on the current, best available united science. I try not to focus on the individuals and rather focus on the whole picture because ... of course it's easier to just blame someone and of course he has a lot of responsibility ... and he, of course, is not doing enough”, she said.

She also lambasted the system “that is wrong”, repeating her call to men and women in power to listen to the science and act on the science.

As for Justin Trudeau, he spoke highly about the 16-year-old, who has inspired student climate protests and school walkouts around the globe, calling her a “remarkable” young person. He also described her as “the voice of a generation of young people” and said that he is listening to the calls to make the world better.

“I agree with her entirely. We need to do more”, he said.

The leader of the Liberals, who is currently seeking re-election, also pledged to plant two billion trees if his government wins the upcoming elections.

However, Trudeau also brought up his government’s decision to greenlight the expansion of the $4.5 billion Trans Mountain pipeline right after declaring a climate emergency, which prompted protests in Canada and a critical tweet from Thunberg this June. The Canadian prime minister defended these actions.

"We have a national climate plan that will reduce our emissions and hit our 2030 targets in a way that also includes getting a better price for our oil resources that allows us to put the profits directly into the fight against climate change", he told journalists, as cited by the Canadian broadcaster CBC.

Apart from speaking with Greta in private, Trudeau and his family also joined the rally in Montreal with a large security detail as some of the protesters reportedly chanted slogans against the pipeline expansion and Trudeau. One of those attending the rally, carrying eggs, was reportedly tackled to the ground.

​Although Trudeau has repeatedly voiced a commitment to the fight climate change, he faced backlash from environmentalists and First Nation groups earlier this year for approving the expansion of a pipeline bought by the Canadian government from the Texas-based Kinder Morgan infrastructure company last year for $4.5 billion.

If completed, the expansion would nearly triple the capacity of the pipeline, which runs from Edmonton in the western oil-rich province of Alberta to Burnaby on British Columbia’s Pacific coast. Supporters of the project say it will create new jobs and reduce the chance of spilling compared to transporting oil by tankers.

However, the move sparked protests as it came just 10 months after the Federal Court of Appeal stopped the project and ordered the National Energy Board to redo its review of the pipeline, claiming that the original study was flawed and lacked adequate consultations with First Nations peoples, according to an AP report.