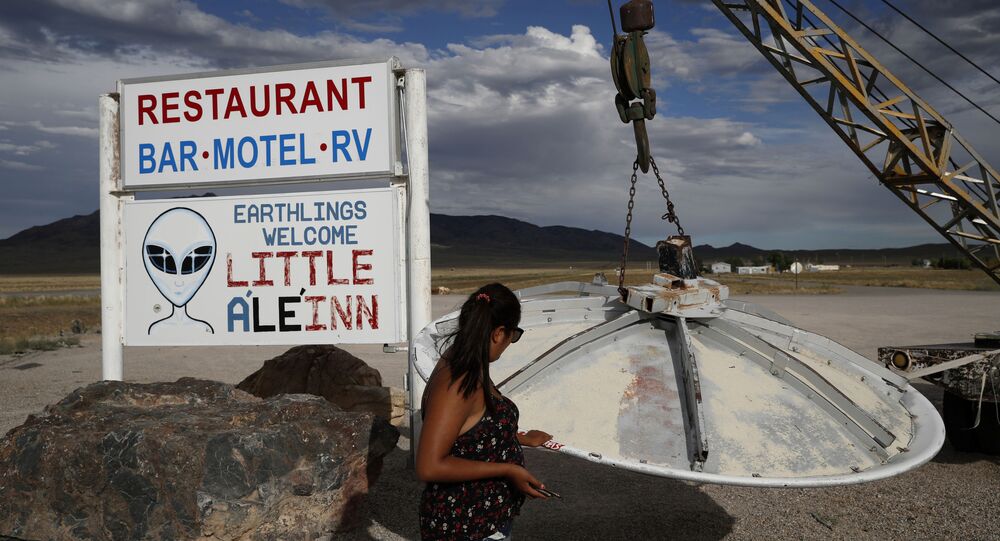 'Houston, We Have a Problem': Officials on Alert as Earthlings Descend Near Area 51

While the viral “Storm Area 51” event that purported to expose the alleged concealment of alien life later morphed into two alien-themed desert festivals in Nevada, the US military is still preparing for an influx of UFO hunters to the site by putting up barricades and deploying extra military personnel.

Lincoln County officials are currently preparing “for the worst” as two alien-themed festivals are about to kick off in Nevada, near the famous Area 51 that has long been rumoured to conceal extraterrestrial technologies proving the existence of UFOs.

The original “see them aliens” Facebook event that saw 2 million subscribers was supposed to be held on 20 September, but later transformed into a desert festival called “Alienstock” in Rachel and “Storm Area 51 Basecamp” event in Hiko, Nevada, which were subsequently cancelled due to the security concerns of organisers. Despite the refusal from organisers to be held accountable for anything that happens during the events, local authorities are still preparing themselves for an influx of UFO-lovers to the area in the upcoming days.

“We are preparing for the worst and hoping for the best", said Lincoln County Emergency Manager Eric Holt. “If we don’t get the numbers for what we’re prepared for we can send some of the resources home. If we need it we can have it".

According to officials on the ground, the security preparations for Alienstock in Rachel, which kicked off on Thursday night and Area 51 Basecamp in Hiko set to kick off on Friday, have been in place for six weeks.

“We’re in coordination with several other operators to ensure the safety of our residents and visitors to the area", said Holt, noting that the Wednesday night went relatively peacefully.

US Air Force Secretary Matt Donovan earlier warned that the US military was expecting “some folks” to show up in the surrounding area, with “extra security measures” and “additional security personnel and barricades” having been set up in the area.

With anywhere between 5,000 and 50,000 currently expected to attend the festivals despite warnings from organisers, the biggest concerns are believed to be traffic congestion, wildlife such as snakes, insects, or other creatures.

“We’re preparing for a lot", Lincoln County Commission Chairman Varlin Higbee said. “It is a desert, everything out here will sting you, bite you or poke you. So be prepared".

As the first campers are unrolling their tents and putting up the first art pieces and space ship installations, netizens were also embracing the festive mood, with a bunch of alien-related memes and reactions circulating on the internet. Even Space X and Tesla’s CEO Elon Musk could not help but post a “you have been warned” meme, featuring some apparent consequences of entering the highly classified Area 51, which was followed by a number of reactions from his followers.

You have been warned pic.twitter.com/11CHFHUdr1

A humble request from me to any friends visiting Area 51 tomorrow...
Can you pick me up a little nick knack from the gift shop?

An ayylmao alien bobblehead would be cool. pic.twitter.com/yedzr2Gh2l

Everybody this is your last chance to get a permission slip take it while you can pic.twitter.com/hpd9OTZs56