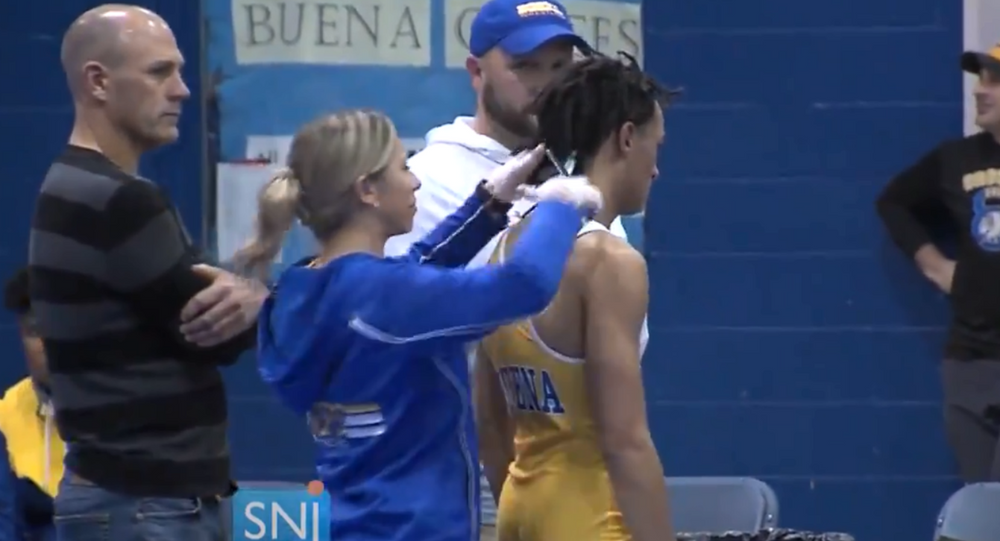 The referee who received immediate backlash after forcing a high schooler to cut his locs in order to proceed with his wrestling match has been banned from his sports gig for two seasons.

Referee Alan Maloney will have to keep his calls to himself until the fall 2021 following a joint decision made by the New Jersey Division on Civil Rights (DCR) and New Jersey State Interscholastic Athletic Association.

In addition to Maloney’s two-season ban, the DCR and New Jersey Attorney General Gurbir S. Grewal announced Wednesday that all officials and other wrestling staff in the state would be ordered to undergo “implicit bias training” to avoid similar incidents in the future.

“Student athletes should be able to compete with each other on a level playing field,” Grewal asserted in the release. “Racial discrimination in the enforcement of the rules of any sport is inconsistent with the spirit of fair play.”

In December 2018, Andrew Johnson, a multi-racial teen wrestling for Buena Regional High School, was told by Maloney that he had violated a national rule and would have to cut his hair, which was styled in the form of locs, or forfeit the match.

Johnson, though visibly upset by the crude cutting of his hair, agreed to have it done in order to continue the match.

Epitome of a team player ⬇️

A referee wouldn't allow Andrew Johnson of Buena @brhschiefs to wrestle with a cover over his dreadlocks. It was either an impromptu haircut, or a forfeit. Johnson chose the haircut, then won by sudden victory in OT to help spark Buena to a win. pic.twitter.com/f6JidKNKoI

Footage of the incident sparked immediate outrage from the American Civil Liberties Union of New Jersey.

“This is not about hair. This is about race. How many different ways will people try to exclude Black people from public life without having to declare their bigotry?” asked the organization.

An investigation by DCR legal specialist Alexis Franklin indicated that Maloney told Johnson his locs were “unnatural,” “abrasive and altered” and went against National Federation of State High School Associations Rule 4.2.1. The rule, which dealt with long hair, was previously interpreted to mean that traditional black hairstyles, regardless of length, had to be covered, according to the attorney general’s Wednesday press release.

The attorney general claims the rule has since been revised and is now more explicit in dealing solely with hair length.

It’s not clear whether Maloney, who was also ordered to participate in sensitivity training and attend an alcohol awareness program following his use of a racial slur back in 2016, will return to his refereeing gig after his suspension expires. NBC Washington reports that the referee did, however, claim that he intended to sue for defamation and emotional distress related to the 2018 hair cutting incident.