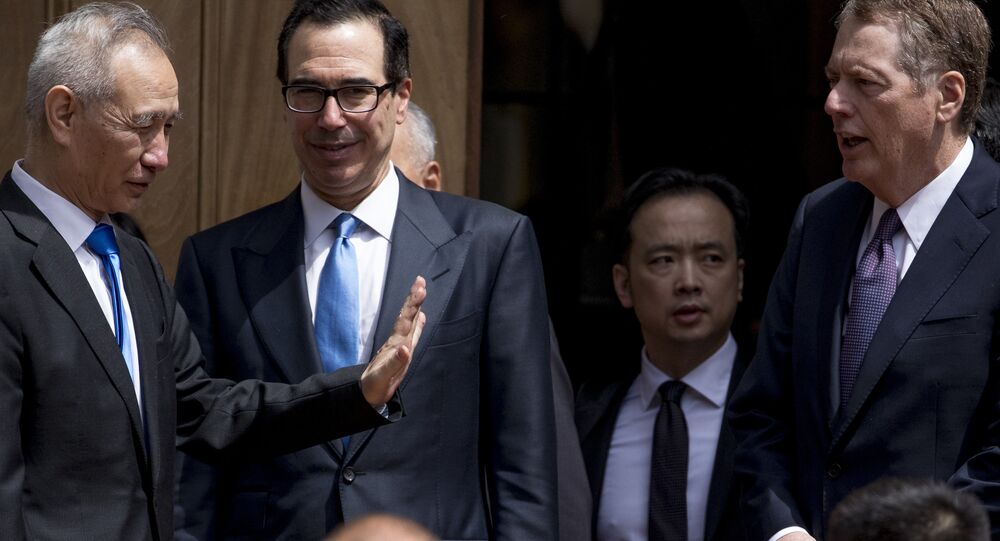 US Treasury Chief to Plan for Trade Meeting in China Soon

US Treasury Secretary Steven Mnuchin will plan for another trade meeting in China at some point soon, a Treasury spokesman said on Tuesday, echoing President Donald Trump's earlier statements that US dialogue with Beijing was continuing.

The spokesman for the US Treasury indicated that the negotiations between the world’s two biggest economies on their ongoing trade dispute would continue, Reuters reported.

"As the secretary has indicated, the negotiations will continue. We do anticipate, as the secretary indicated yesterday, that we will plan for a meeting in China at some point soon," he said.

The spokesman provided no further details on the timing of a potential visit, but confirmed Trump’s plan to meet Chinese President Xi Jinping in late June at a Group of 20 leaders summit in Japan.

Earlier on Tuesday Trump called the trade war with China "a little squabble" and insisted talks between the world's two largest economies had not collapsed.

"We have a dialogue going. It will always continue," the US President said, describing the negotiations as “very good" while touting his "extraordinary" relationship with Xi.

READ MORE: China to Emerge Victorious From Trade War With US – Foreign Ministry

Chinese Foreign Ministry spokesman Geng Shuang also said it was his understanding that China and the United States had agreed to continue "pursuing relevant discussions," cited by Reuters.

"As for how they are pursued, I think that hinges upon further consultations between the two sides," Geng said.

© AP Photo / Pablo Martinez Monsivais
Trump Says Outcome of China Trade Talks Will Be Known in ‘Three or Four Weeks’
On 10 May US President Donald Trump increased tariffs on around $200 billion worth of Chinese imports from 10 percent to 25 percent. The president also ordered tariffs to be raised on all remaining US imports from China, which are valued at around $300 billion.

Relations between Washington and Beijing have been tense since US President Donald Trump decided last June to impose 25 percent tariffs on $50 billion worth of Chinese goods in a bid to fix the US-Chinese trade deficit. Since then, the two sides have exchanged several rounds of trade duties, as they have yet to produce a deal.