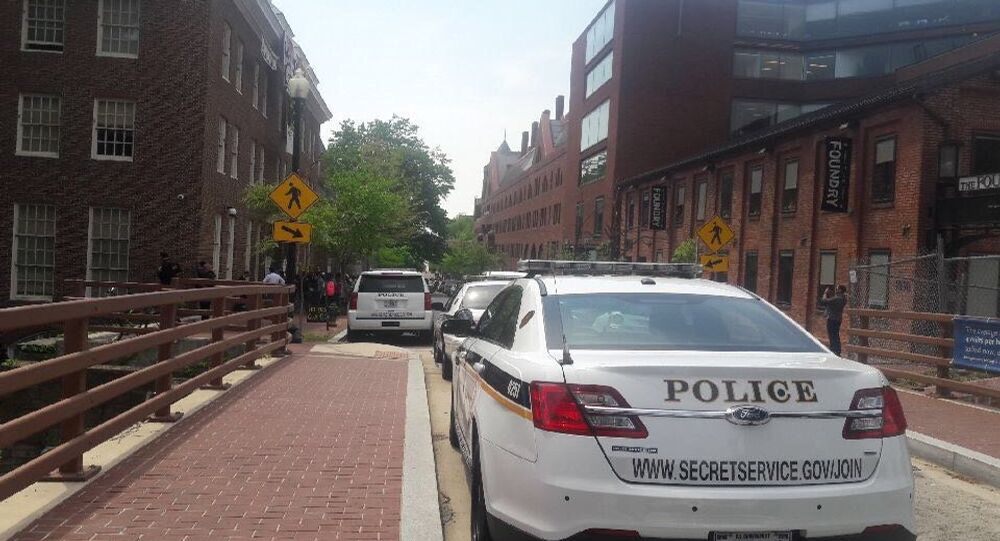 WASHINGTON (Sputnik) - US law enforcement arrested three people outside the Venezuelan Embassy on Thursday as activists who say are protecting the diplomatic facility from an opposition takeover tried to deliver food and other supplies to activists inside, an officer at the scene told Sputnik.

The Embassy Protection Collective activists have been camped out inside the embassy for weeks, at the invitation of Venezuelan diplomats, anticipating that the country's opposition movement headed by Juan Guaido will soon attempt to take over the property.

© REUTERS / Shannon Stapleton
Situation Outside Venezuelan Embassy in Washington, DC (VIDEO)
Witnesses at the embassy confirmed the account, saying two of the individuals were part of an activist group called the Embassy Protection Collective, which has for the last few weeks been guarding the property from an illegal takeover by the Venezuelan opposition.

The third person was a Venezuelan opposition supporter, the witnesses said.

Guaido's representatives in March seized control of two other buildings in Washington that belong to Venezuela's Defence Ministry, along with a consular property in New York.

The advocacy group Code Pink, whose members have joined the Collective, said in a statement on Twitter that Thursday's arrests occurred as two activists were trying to deliver food and medicine to the protesters inside after they had run out of supplies.

© REUTERS / Shannon Stapleton
Police Arrive at Venezuelan Embassy in Washington With Handcuffs, Block Entrance (PHOTOS)
The group also accused US law enforcement officials of collaborating with the "right-wing opposition mob" that is standing behind Guaido.

Code Pink later tweeted an update saying that authorities eventually allowed food, medicine and other supplies to be transported into the building. But the group questioned why its member, who they identified as Ariel Elyse Gold, had been arrested "trying to do just that."

Venezuela Coup Fails to "Take Off"