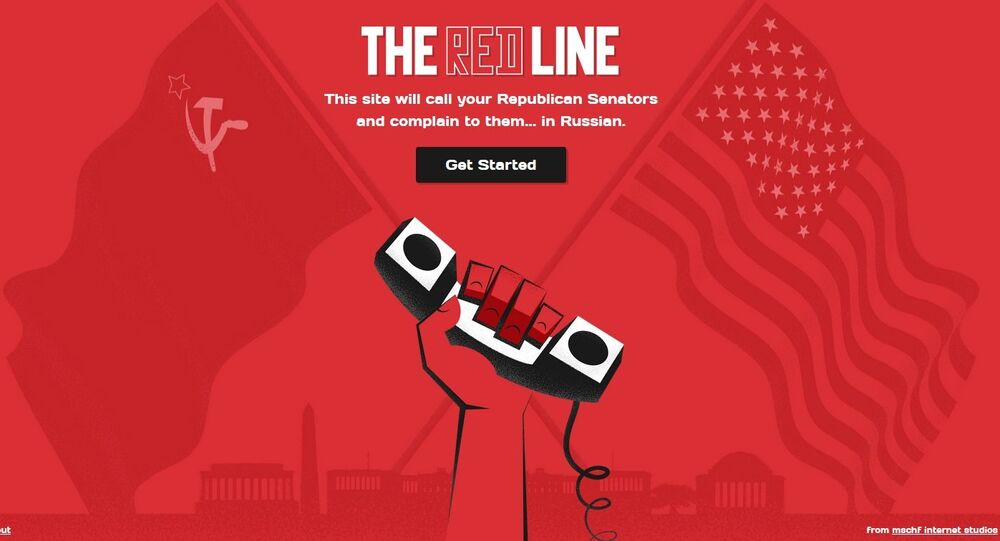 It seems President Trump's opponents from the Democratic Party are trying to move heaven and earth in a bid to make people believe in the so-called collusion between Trump and Russia during the 2016 US presidential elections.

Pranksters from MSCHF Internet Studios have unveiled a website which developers say allows users to call US Republican Senators and …“complain to them in Russian”.

The reason for the system? The developers are sure that there are plenty of complaints, not least those pertaining to Russia’s alleged interference in the 2016 US presidential elections.

“As the United States government continues catering to foreign powers, it’s important the American public is heard. Republicans won’t listen to their constituents’ grievances, so try a complaint straight from the Kremlin”, Variety Magazine cited an unnamed MSCHF spokesperson as saying.

With The Red Line, you can let Mitch #McConnell know you’d prefer healthcare to a border wall, or ask Leslie #Graham what #Trump knows that’s got him so scared.

The Red Line site’s navigation is fool-proof and makes it possible for web surfers to translate any text into Russian and then play it in audio format.

Friends! We just launched one of my favorite projects of all time:

Red Line: a website that lets you call Republican Senators in Russian…so they’ll actually listen to you.

After the result of the translation is read out loud with the help of text-to-speech technology, users can then select a relevant Republican senator, initiate a call directly from the site and have the message played back on their phone.

Too funny
If they respond in Russian… https://t.co/qzTb2Nar2P

However, it's unclear how senators will understand the message, if at all.

© Sputnik / Alexei Druzhnin
'Fantasy': Seagal Slams Alleged Trump-Russia Collusion as Fabricated Propaganda
Special Counsel Robert Mueller's two-year-plus investigation into the alleged collusion between Russia and Trump has yielded no results. Both the Kremlin and the US president have repeatedly denied the US Democratic Party’s accusations that Russia used a mix of social media influence and cyberattacks in 2016 to sway the presidential elections in favour of Donald Trump.

The Russian president’s press secretary, Dmitry Peskov, described the accusations as “absolutely unsubstantiated”, with Foreign Minister Sergei Lavrov stressing that there is no proof to support the US’ collusion claims.