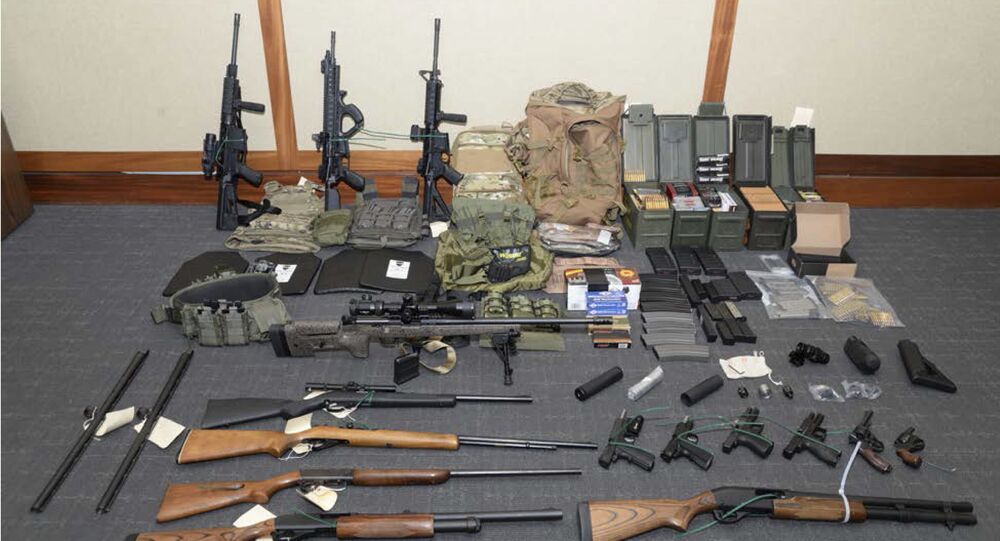 Last Friday, police apprehended Christopher Paul Hasson, a US Coast Guard lieutenant they say was a “domestic terrorist” and self-identified white supremacist, with a laundry list of politicians he intended to target. Hasson is only the latest violent white supremacist to be outed in the US military, illustrating a growing problem for the service.

"The defendant is a domestic terrorist," the government said in court filings on February 15 supplied by The George Washington University's Program on Extremism, "bent on committing acts dangerous to human life that are intended to affect governmental conduct."

Hasson was arrested by agents from the FBI and US Coast Guard Investigative Service at his home in Silver Spring, Maryland, where he was found to have thousands of rounds of ammunition as well as many rifles — and what's more, he had a hit list of politicians and media figures.

Hasson is due back in US District Court in Greenbelt, Maryland, at 1 p.m. on Thursday.

According to court documents, Hasson was an ardent student of Anders Breivik, the right-wing terrorist who massacred dozens in Norway in 2011, and studiously read Brevik's 1,500-page manifesto on terrorism.

​The US Coast Guard's 2018 register of officers lists a Christopher P. Hasson as a lieutenant as of last April. He had been working at Coast Guard headquarters since 2016, but previously served in the US Marine Corps from 1988 to 1993 and in the Army National Guard for two years in the mid-1990s, the Post noted.

The filing notes many examples of his activities, which stretch back for years and include a draft letter to a prominent neo-Nazi leader and a draft email from 2017 that detailed his musings over a campaign of bioterrorist attacks on food supplies and the merits of a "bombing/sniper campaign."

In that letter, Hasson identifies himself as "a long time White Nationalist, having been a skinhead 30 plus years ago before my time in the military."

​"During unrest target both sides to increase tension," Hasson wrote in the email, according to the court filings. "In other words provoke gov/police to over react which should help to escalate violence. BLM [Black Lives Matter] protests or other left crap would be ideal to incite to violence."

His phrasing evokes the "strategy of tension" adopted by far-right terrorist organizations in Italy during the so-called "Years of Lead" from 1968 until 1982, when neo-fascist groups were locked in confrontation with the rising Communist Party of Italy and other militant leftist groups.

Hasson isn't an isolated incident, either.

Last May, a report by ProPublica found that at least three members of the neo-Nazi terrorist organization Atomwaffen Division are on active duty in the US military, and at least three other members have been identified as former service members. Atomwaffen has drawn public attention in the last few years for a string of violent murders of Jews, Muslims and LGBTQ people and for their ties to other neo-Nazi groups, Sputnik reported.

In several cases, the Atomwaffen members who went on to carry out gruesome murders had received military training from fellow members or sympathizers in the US military, the report notes.

When he was arrested this week in Silver Spring MD, he had a stash of guns and a list of people he wanted to kill. It was a who’s who of media personalities and elected officials. pic.twitter.com/Y8iEgqktlR

​Members often praise the book "Siege," a 1993 neo-Nazi fantasy tale by James Mason, which preaches waging guerrilla warfare against the US government and has become a manifesto of sorts for Atomwaffen, which seeks to do the same.

Last November, a cadet in the US Army Reserve Officer Training Corps (ROTC) was exposed on Twitter as having affinities for Adolf Hitler, neo-Nazis and white nationalists, Sputnik reported.

"The only thing Hitler did wrong was making German National Socialism into a cult of personality," she tweeted the previous month about the man responsible for the extermination of nearly 12 million people and a genocidal crusade across Eastern Europe.