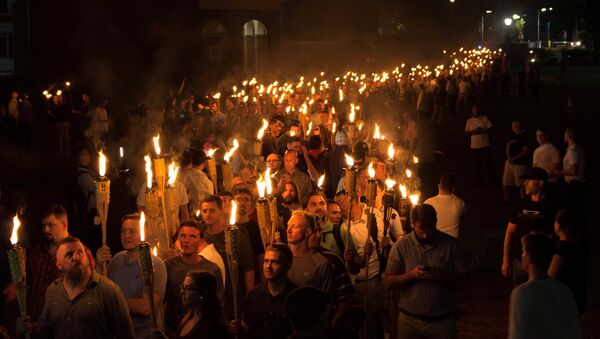 © REUTERS / Alejandro Alvarez/News2Share
Subscribe
International
India
Africa
Less than six months after the “Unite the Right” rally on the campus of the University of Virginia led to a white supremacist running over counter-protesters with lethal results, a new report indicates that white supremacist fliers are popping up on the grounds of more and more college campuses across the country.

Since September 1, 2016, the Anti-Defamation League has recorded 346 instances of white supremacist propaganda everywhere from community colleges to Ivy League schools. Fliers, stickers, banners and posters qualified as instances of propaganda.

The propaganda contains hateful messages attacking Jews, blacks, Muslims, immigrants and the LGBT community, according to the ADL, while promoting an urgent need to "save" the white race.

Texas, California, Pennsylvania, Florida, Virginia and Ohio have been the hardest hit, the ADL said January 29.

Identity Evropa, Patriot Front, Vanguard America, a group called The Right Stuff, neo-Nazi group Atomwaffen Division, the Daily Stormer and the American Renaissance were the most prolific propagandizers, according to ADL.

The Unite the Right group at Charlottesville, Virginia chanted slogans like "white lives matter," "Jews will not replace us" and "blood and soil" while walking through the campus with torches to protest the removal of a Robert E. Lee statue by the city government. Lee was the commander of the Army of Northern Virginia, one of the primary armies of the secessionist Confederacy during the American Civil War and was a slave owner.

Ironically, the "patriotic" effort to uphold Lee's legacy leaves out the fact that Lee effectively renounced his US citizenship to fight for the Confederate Army in 1861, before eventually surrendering in 1865. After the war, and until Lee died, his US citizenship was not restored.