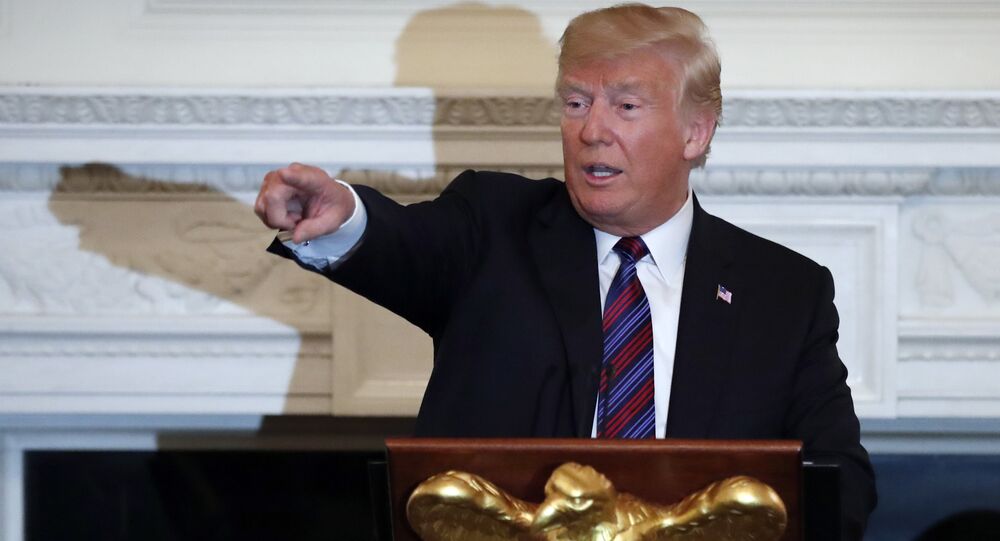 The alleged incident happened at a 4 January meeting with congressional leaders in the White House, where Trump tried to push through his demand for $5.7 billion in border wall funding.

US President Donald Trump lashed out at Acting Chief of Staff Mick Mulvaney in front of Republican and Democratic congressional leaders during a meeting over the ongoing partial government shutdown, Axios reported.

The meeting was reportedly held on 4 January, with Trump demanding $5.7 billion to build a wall on the US-Mexico border to stem the flow of illegal migrants.

Since Democrats were offering only $1.3 billion, Mulvaney reportedly stepped in to say that the two sides should try to meet halfway.

“Trump cut him off… ‘You just f**ked it all up, Mick’”, the source claimed, saying that Trump dressed down his newly-minted chief of staff in front of everyone. “It was kind of weird”.

© AFP 2021 / NICHOLAS KAMM
Fired WH Chief of Staff Kelly Claims What Trump Wants Is Not a ‘Wall’ But a ‘Barrier’
Another source confirmed the alleged exchange, adding that Trump seemed to be irritated at Mulvaney’s negotiating style.

“As a negotiator, Trump was resetting. Mick was not reading the room or the president”.

Axios further cited an unnamed White House official, who was also present at the meeting, as saying that “the president and Mulvaney joked about it afterwards”:

“This is an exaggerated account of the exchange that doesn’t reflect the good relationship Mulvaney has built over the last two years with the president”.

The claims have set off a major landslide on social media, with many netizens assuming that Mulvaney’s tenure as Acting COS is coming to an end:

I suspect Mulvaney’s tenure as Acting Chief of Staff will soon come to an end, as Trump throws him under the bus and blames him for Trump’s forthcoming defeat on the shutdown. Wouldn’t be surprised if Trump brings over Whitaker as COS if Barr’s confirmed. https://t.co/ptxXZNbLKp

A vast number of users condemned the president for using explicit language, and suggested that Trump “humiliates” everyone:

I have to say, I don’t approve of the President using this kind of language. He sets a very bad example for the youth of America.

Trump humiliates pretty much everyone!

The amount of sh*t Trump's staff has to eat on a daily basis. I know I wouldn't tolerate it.

A Twitterian made an apparent reference to Trump’s comments on US Congresswoman Rashida Tlaib calling him a “motherf**ker”:

Some, however, took aim at Mulvaney, saying that he had “humiliated himself” by accepting the position of chief of staff:

Mick Mulvaney humiliated himself by accepting the Chief Of Staff position.

No sympathy here; he knew what he was getting into.

Having fun yet, Mick?

One user alleged that Trump would come up with a catchy nickname for Mulvaney “in no time”:

He’ll be referring to him as Mul-lamey in no time. Give him 30 days

Mulvaney accepted the position after Trump announced in early December that his chief of staff, General John Kelly, would resign at the end of the year 2018 after months of media speculation that POTUS was considering high-level staff changes.