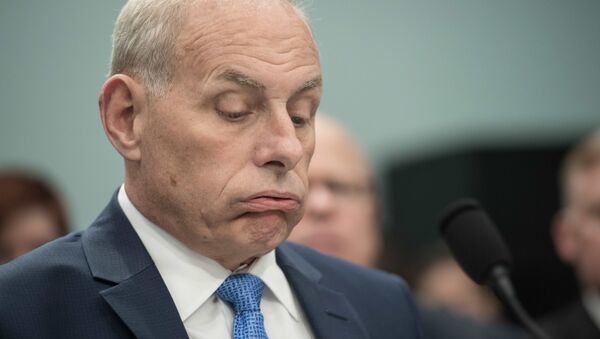 Outgoing White House Chief of Staff John Kelly, in an interview published in the Los Angeles Times on Sunday, detailed that US President Donald Trump is not pushing for a concrete wall but is only seeking a barrier as a means of tackling illegal immigration.

Kelly said Customs and Border Protection (CPB) agents told him during his brief tenure as Department of Homeland Security (DHS) secretary that physical barriers are necessary in some areas, but what the de[partment really needs is new technology and additional personnel.

“To be honest, it’s not a wall,” Kelly told the Los Angeles Times.

“The president still says ‘wall’ — oftentimes frankly he’ll say ‘barrier’ or ‘fencing,’ now he’s tended toward steel slats. […] But we left a solid concrete wall early on in the administration when we asked people what they needed and where they needed it,” he added.

Kelly asserted to the newspaper that the US has an "immigration problem," and placed the burden of addressing it on Congress.

Trump announced a partial shutdown of the federal government last week, after the Senate failed to accept a $5 billion spending proposal for border security demanded by the president. The former White House chief of staff also declared that Trump has never made a decision without gathering information first, dismissing claims that Trump does not think through the impacts of his decisions, particularly with regard to the shutdown.

“It’s never been: The president just wants to make a decision based on no knowledge and ignorance,” Kelly avowed, adding that, “You may not like his decision, but at least he was fully informed on the impact.”

White House Chief of Staff John Kelly to Resign in Coming Days - Reports
Kelly also noted that although immigrants “overwhelmingly, are not bad people,” they must be prevented from entering the country illegally, and observed that both immigrants and lawmakers are to blame for the tense situation on the US-Mexico border.

“One of the reasons why it’s so difficult to keep people from coming — obviously it’d be preferable for them to stay in their own homeland but it’s difficult to do sometimes, where they live — is a crazy, oftentimes conflicting series of loopholes in the law in the United States that makes it extremely hard to turn people around and send them home,” Kelly said.

From the 1980s to the mid-2000s, border arrests— the most common measure of illegal immigration — routinely exceeded 1 million people a year. In the fiscal year ending September 2018, that number was reduced to 521,090, according to the Los Angeles Times.