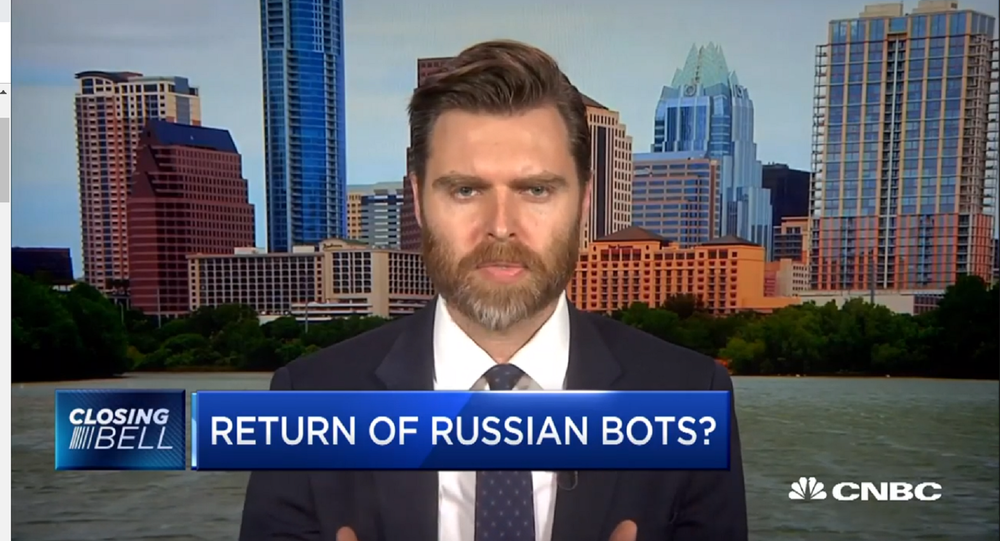 Facebook suspended on Saturday five accounts run by multiple people who used the platform to weaponize disinformation in the 2017 Alabama special election for US Senate.

One of the accounts was confirmed by the Washington Post to be that of Jonathon Morgan, former special adviser to the State Department and CEO of New Knowledge, the cybersecurity firm that last week delivered a report on alleged Russian meddling in the 2016 presidential election to the Senate.

The individuals behind the remaining four accounts are unknown.

Facebook told the Post that New Knowledge had not been found to have violated any rules, and a page that appears to belong to the company is active.

"Five accounts run by a multiple individuals for engaging in coordinated inauthentic behavior" were banned, the company said in a statement, adding, "We take a strong stand against people or organizations that create networks of accounts to mislead others about who they are or what they're doing."

"We orchestrated an elaborate ‘false flag' operation that planted the idea that the Moore campaign was amplified on social media by a Russian botnet," an internal report from New Knowledge obtained by the New York Times said of the Alabama operation. The project sought to "depress turnout" for Republicans in the election and to "enrage and energize Democrats" with a "Russian bot scandal."

Morgan has roundly denied the aims of the project as outlined in that internal report, arguing that the company wasn't attempting to influence the public but instead learning about supposedly "Russian" techniques.

The New York Times wrote that the $100,000 budget of the Alabama project, which used Facebook and Twitter as its primary vehicles for influence, was "likely too small to have a significant effect on the race" and quoted Joe Trippi, an adviser to the Democrat who won the race, Doug Jones, as arguing the same — that the figure was too small to mean much.

"They're doing what they projected onto the Russians. Joe Trippi, the Democratic operative, said $100,000 couldn't mean anything" in a race that saw $51 million poured into it, Jim Kavanagh, editor of The Polemicist, Sputnik News last week. "That's exactly what people have been saying about the so-called Russiagate and Russian-bought ads for the general election, which was a $2 billion race."

Jones bested Republican Roy Moore, who was the target of the Alabama influence operation, although unrelated sexual assault allegations from nine women, some of whom were minors at the time of the alleged incidents, rocked Moore's campaign.

"What is obvious now is that we have focused so much on Russia that we haven't focused on the fact that people in this country could take the same playbook and do the same damn thing," Jones recently told the Washington Post.

New Knowledge became the subject of widespread scrutiny last week after The New York Times both obtained an advanced copy of its report to the Senate and broke the story of the company's influence operation in Alabama. The company also made headlines for accusing Russia of stoking internet outrage in France in a dubious attempt to link the Kremlin to the "Yellow Vests" protests.

A cursory look through the resumes of key people at the cybersecurity firm reveals a revolving door between it and the apparatus of the US security state, which is not uncommon for pro-Washington cybersecurity firms.

Morgan, who is banned from Facebook, also played a role in the creation of the Alliance for Securing Democracy think tank's "Hamilton 68 Dashboard," which claims to track 600 accounts on Twitter "linked to Russian influence efforts online."

In an explosive article in BuzzFeed which declares the Russian troll-tracking dashboard "not to mince words, total bulls**t," Clint Watts, one of two men cited as the founders of the project, told the outlet that he's "not convinced on this bot thing," and that the Russian bot narrative was "overdone."

In the article, published many months prior to the revelation about New Knowledge's false flag operation in Alabama, BuzzFeed reporters presciently and critically explained that Russian bots had been blamed by the media "for pushing for Roy Moore to win in Alabama's special election."

"Nearly every time you see a story blaming Russian bots for something, you can be pretty sure that the story can be traced back to a single source: the Hamilton 68 dashboard," BuzzFeed reported.

In yet another example of a key participant in a project rejecting its own stated aims, Watts told BuzzFeed that the bots tracked by the dashboard, which Hamilton 68 claims are linked to Kremlin influence operations, are not even believed to be "commanded in Russia — at all. We think some of them are legitimately passionate people that are just really into promoting Russia."

To identify which bots they wanted to track, the Alliance for Securing Democracy "employed social network analytical techniques largely developed by J.M. Berger and Jonathon Morgan," the think tank states in a page on its methodology.

Morgan himself has promoted the dashboard on multiple occasions on Twitter. In one of those posts, he used the dashboard to blame Russia for trying to influence the Alabama race — the very same election which Morgan and New Knowledge were actively meddling in. "Russian trolls tracked by #Hamilton68 are taking an interest in the AL Senate race. What a surprise," Morgan tweeted.