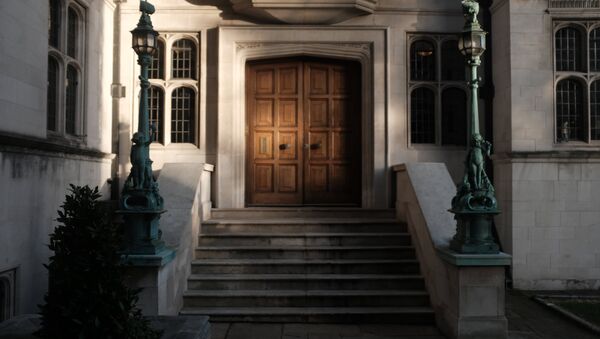 Kit Klarenberg
All materials
It’s the afternoon of 11th December and I've just been aggressively turfed from the offices of the Institute for Statecraft, an until recently virtually unheard-of think tank, secreted in the basement of Two Temple Place - a crenellated Gothic-style mansion overlooking the River Thames.

Things started promisingly, as Simon Bracey-Lane, research fellow at the Institute, welcomed me in the foyer with a warm hello and handshake - his demeanour would however shift seismically mere seconds later when I revealed I was a journalist.

Stopping short of physically expelling me from the building but invading my personal space to such a degree he may as well have done, I made for the exit, Simon shadowing me every step of the way and relentlessly repeating his menacing entreaties to depart until I was safely outside and the office's heavy oak door slammed firmly shut.

To be fair to the young Institute apparatchik, I wasn't overly surprised by his response. Despite receiving millions from taxpayers, his employer plainly doesn't like outsiders and goes to enormous efforts to conceal its true location from public view. Still, the organisation may need to become accustomed with prying eyes in short order — for it now finds itself at the epicentre of a international political scandal of potentially historic proportions.

On November 5, international hacking syndicate Anonymous published a series of internal files it'd appropriated from Integrity Initiative, an Institute for Statecraft subsidiary. The material was explosive, revealing the endeavour — which claims to defend democratic institutions from Russian "destabilisation campaigns" — to be an international information warfare effort run by British military intelligence specialists, which has disrupted the domestic politics of several countries. 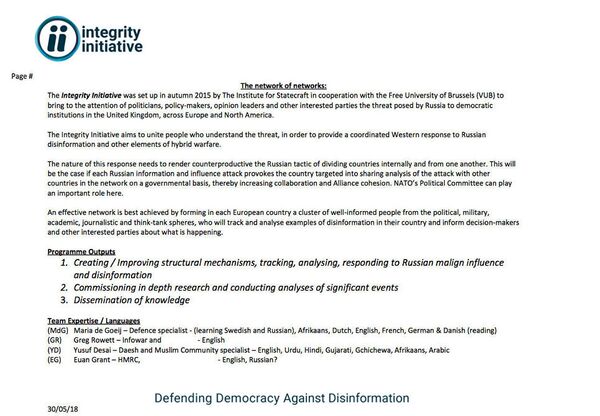 As part of this enterprise, the organisation has amassed 'clusters' the world over — collectives of politicians, businesspeople, military officials, academics and journalists — who "understand the threat posed to Western nations [by] disinformation" and can be mobilised to influence policy, among other things. The files suggest these structures are operational in France, Germany, Greece, Italy, Lithuania, Montenegro, the Netherlands, Norway, Serbia, Spain and the UK, with plans to extend the scheme to every corner of the globe.

The documents also offer several examples of cluster mobilisation in action — one boasts of the success of 'Operation Moncloa', an effort to block the appointment of Pedro Banos, an army reservist and author the Spanish Socialist party wanted to make the country's Director of National Security.

When Banos' candidacy was announced, members of the Integrity Initiative's Spanish cluster — including Gonzalez Ponz, spokesperson of the Partido Popular in the European parliament, and Nacho Torreblanco, director of the European Council for Foreign Relations Office in Madrid — colluded via WhatsApp to flood social networks with anti-Banos messages, and provide Spanish media with dossiers of negative material on the former head of counterintelligence and security for the European army. The Initiative's UK cluster supported their work, and within 24-hours the planned appointment was dropped.

The files don't offer an example of any similar plot in the UK, but its cluster there includes Atlantic Council fellow Ben Nimmo, who has repeatedly claimed Labour leader Jeremy Corbyn is being supported by the Russian state through various means, including a "twisted cyber campaign", without any supporting evidence whatsoever. The Initiative's official Twitter account has also posted numerous tweets and links to articles attacking Labour, Corbyn — one post said he was a "useful idiot" in service of the Kremlin — and other prominent party figures.

Learning anything about the Institute for Statecraft, let alone contacting the organisation, isn't easy. Its minimalist website provides no contact information or address — a webform being the sole means of getting in touch — and likewise offers little clue as to its raison d'etre or services, a section titled 'activities' being entirely comprised of laconic and virtually impenetrable bursts of corporate jargon.

Visitors are told the Institute "promotes peace and security through the skilful use of state power", "seeks to grow the capacity for strategic thinking and developing a national competitive advantage", "combines its experience and capabilities to enable its people to devise and implement solutions to challenges which [it] has been commissioned to address", and "is distinguished from 'Think Tanks' in that its research is primarily focused on enabling it to deliver effective projects and programs".

Moreover, the organisation is registered as a charity in Scotland, listing its principal office address as Gateside Mills in the sleepy Scottish town of Cupar, Fife, and the same is true of its Companies House records — but when Sputnik journalists visited the location they found Gateside Mills to be a crumbling, derelict building, with no indication the Institute had ever operated there. Providing false information to the Scottish Charity Regulator is illegal, and a spokesperson for the body has confirmed to me an inquiry into the Institute has been launched.

The location of the Institute's actual headquarters was provided to me by former British Ambassador Craig Murray. There's nothing directly linking any of the think tank's named directors to the address, and it's not clear who or what is paying the office's presumably sizeable rental fees or utility bills - Murray tells me based on his diplomatic experience these are strong indications the building may have been provided to the Institute by British intelligence, a suggestion not particularly shocking given the individuals connected to the effort.

EU MP Concerned Over UK Interference Abroad Via Integrity Initiative Project
For instance, the Initiative's senior manager is Chris Donnelly  - a reserve officer in the Army Intelligence Corps who once led the military's Soviet Studies Research Center at Sandhurst, he was appointed 'Honorary Colonel in Military Intelligence' in 2015, the same year the Initiative was launched. Between 1989 — 2003 he was also the NATO Secretary General's Special Adviser for Central and Eastern Europe. Dan Lafayeedney, a senior operative at the Institute, is ex-SAS and while there was attached to a regiment running spy cells in Russia.

Such experience almost certainly involved cultivating citizens of other countries for intelligence purposes, a discipline that surely comes in very handy when recruiting new cluster members. A briefing note prepared by Simon Bracey-Lane — the Institute research fellow who so truculently ejected me from their offices — documents how new Integrity Initiative associates were enlisted in the Balkans.

Kremlin critics in numerous countries in the region were courted — sometimes over food and/or drinks — and often offered funding. Bullet-points list the target's spheres of interest and expertise, and how they can be used to undermine the Russian government and its national and international interests. On more than one occasion Simon offers a "personal observation" on the individual(s) in question, for example noting 'Sissy and Elias' "looked scared…certain topics caused voices to drop, and eyes watched the people who walked passed [sic] table" — a sentence that wouldn't look out of place in an MI6 human intelligence report.

There's no indication Simon has a background in the intelligence services, but his professional resume is nonetheless somewhat puzzling. He's been in the media spotlight before, in 2016 appearing in several articles tracking Bernie Sanders' presidential campaigning efforts. For example, in a BuzzFeed piece published in February that year, he's referred to as a "recent university graduate" inspired to join the Labour party in September 2015 after Corbyn was elected leader — at that point he was serendipitously holidaying in the US, so joined Sanders' campaign "and never left".

"I had two weeks and some money left, so I thought f*** it, I'll make some calls for Bernie. I just sort of knew Des Moines was the place, so I turned up at their HQ, started making phone calls, and then became a fully-fledged field organizer," he told BuzzFeed.

In May the next year, evidently having returned to the UK, Simon established Campaign Together, an organisation providing training to door-to-door political activists supporting progressive candidates, and facilitating 'vote swaps', during the 2017 General Election — a role which would've potentially granted him significant insight into the internal workings, strategy and tactics of the election campaigns of several political parties, as well as personal voting intentions.

Once the effort ended, he seems to have swiftly moved on to the Institute for Statecraft, in October that year hosting an event for the organisation — 'Cold War Then and Now' — at which a panel comprised of Ukrainian nationalists, British military brass and NATO officials discussed among other things the "threat posed to European values and security" by Russia.

It's extremely curious an apparently impassioned Corbyn supporter of avowedly progressive ideological sympathies became so quickly and intimately involved with an organisation that has disseminated anti-Corbyn propaganda, sought to enlist harsh critics of Corbyn to its efforts, and worked to discredit left-leaning political figures abroad. Requests for clarity on this seeming incongruity submitted to Simon via the Institute's webform have gone unanswered as of December 13 — likewise, neither the Institute nor Initiative have responded to any of the vast number of questions I and other Sputnik journalists have put to them over the past few weeks.

The wall of silence may not be able endure much longer. Foreign Office minister Alan Duncan has ordered an official investigation into the Institute, and Shadow Foreign Secretary Emily Thornberry — a target of the Initiative's critical tweets — has seized the issue with some gusto.

In a parliamentary debate December 12, she noted the Integrity Initiative's use of Twitter as a tool for disseminating information had "not been a fringe activity", but "an integral part of its applications for Foreign Office funding over the past two years" — a period in which it has been funded to the tune of US$2.76 million (£2.2 million) by the British state.

"The budget for its agreed objectives of increasing reporting in the media and expanding the impact of its website and Twitter account amounted to £275,000 in this financial year. In the list of key deliverables it promised the Foreign Office this year, it stated explicitly that one of its instruments of delivery will be ‘600-plus Twitter followers, including influential players'," Thornberry said.

In the Commons earlier, I asked Alan Duncan why taxpayers money had been used by the so-called 'Integrity Initiative' to disseminate political attacks from its Twitter site (1/2). pic.twitter.com/zQNOPeQOMn

​She went on to ask several questions — first, whether Foreign Office officials were monitoring the Initiative's Twitter output, and if so why they didn't flag concerns to ministers about the dissemination of personal attacks.

"If not, why was this misuse of public funds going unchecked? Secondly, does the funding agreement governing the integrity initiative make clear that its use of funds and its public statements must comply with Cabinet Office rules? Finally, if the Government intend to renew that funding for the next financial year, what arrangements and agreements will be put in place to ensure that nothing of this sort ever happens again?" she said.

It's shocking the efforts of the Integrity Initiative have been barely mentioned — much less criticised — by the mainstream media since the document trove was released over a month ago, and extremely troubling that after so long, it's still not even clear what the Institute of Statecraft actually is or does, and who or what funds and supports it. With such vast sums flowing from the Treasury straight into its shadowy coffers, British citizens — and those of all countries in the organisation's cluster crosshairs — must be told.