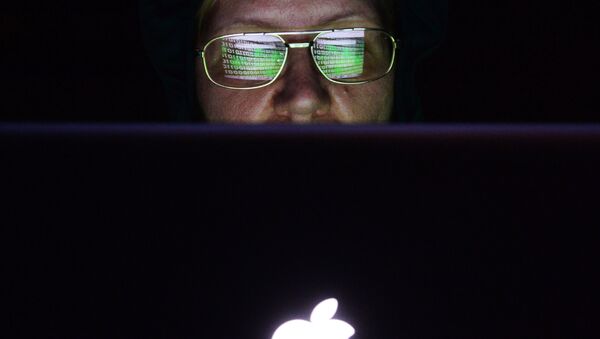 © Sputnik / Kirill Kallinikov
/
Go to the mediabank
Subscribe
International
India
Africa
A new report blows the lid off of breathlessly reported headlines that swept the US in the final months of 2017.

The report revolves around the Senate campaign of Alabama Republican Roy Moore, who was mysteriously followed by hordes of fake Twitter accounts. At the time, Moore's campaign accused his opponent Doug Jones' campaign of "pulling a political stunt on Twitter and alerting their friends in the media.

As it turns out, the bots weren't — as far as we know — known to Jones. However, they weren't Russian either. Instead, they were operated mostly by an anonymous group of Democrats. One participant identified by the New York Times is Jonathon Morgan, the CEO of New Knowledge and former special advisor to the US State Department. Morgan is also the co-founder of New Knowledge.

The resume of the company's chief operating officer, Ryan Fox, is even more cluttered with security state credentials: Fox worked for 15 years at the National Security Agency and worked for the US Joint Special Operation Command as an analyst for the US Army. The company's director of research is Renee DiResta, who was formerly a State Department advisor.

New Knowledge has made headlines this week for its analysis of Russia's alleged disinformation campaign during the 2016 election, on which it produced a report for the United States Senate Intelligence Committee.

The report claims that the Internet Research Agency (IRA) — a private troll farm alleged to be connected to the Kremlin — "created an expansive cross-platform media mirage targeting the Black community, which shared and cross-promoted authentic Black media to create an immersive influence ecosystem."

The New York Times was granted an advance viewing of that report.

"These real issues that these troll farms were — you know, they say, 'Oh my gosh,' they said they were in favor of Bernie Sanders and Jill Stein and Black Lives Matter and then Blue Lives Matter and then Trump," Jim Kavanagh, editor of The Polemicist, told Radio Sputnik's Loud & Clear. "So were they, as troll farms, following the trends? No, no, no. They were creating the trends on behalf of Putin! This is just silly."

Morgan is reported by the Times to have contacted DiResta for suggestions pertaining to the Alabama operation.

"We orchestrated an elaborate ‘false flag' operation that planted the idea that the Moore campaign was amplified on social media by a Russian botnet," an internal New Knowledge report viewed by the Times claims.

The Twitter bots were just one part of the campaign, however. A Facebook page was also set up for the purpose of dividing Republican voters and urging them to write in candidates instead of voting for Moore.

The internal report claims the Alabama project wanted to "depress turnout" for Republicans in the election and "enrage and energize Democrats" with a "Russian bot scandal."

The project, which materialized on Facebook and Twitter, had a budget of $100,000, "likely too small to have a significant effect on the race," the Times reported. The outlet also cited a Democratic advisor to the Jones campaign, Joe Trippi, who said it was "impossible" that the project "had an impact on the race" because of the size of its budget.

"They're doing what they projected on to the Russians. Joe Trippi, the Democratic operative, said a hundred thousand dollars couldn't mean anything" in a race that saw $51 million poured into it, Kavanagh told Loud & Clear hosts Brian Becker and John Kiriakou. "That's exactly what people have been saying about the so-called Russiagate and Russian-bought ads for the general election, which was a $2 billion race."

For comparison, US media has consistently overhyped spending on social media by the IRA, including ads purchased before and after the 2016 election, in many reports on election influence expenditures by the Russian company.

But when it comes to Facebook, pre-election ads, meaning ads that ran during the race, cost the IRA $46,000. On Google (a platform not employed in the Alabama operation), the IRA spent $4,700. While it is not known how much the IRA spent on advertisements on Twitter during the 2016 election, let us, for argument's sake, consider the amount spent equivalent to that of Facebook. The theoretical total of the alleged Russian social media operation is therefore $96,000 — $4,000 less than New Knowledge's Alabama project.

It should go without saying that $100,000 goes a lot further in a campaign confined to a single state than one encompassing the entirety of the United States.

Yet the New York Times has previously called IRA-purchased ads "designed by Russia" to "tip the 2016 presidential election in favor of Donald J. Trump."

If the New York Times is to be believed, Russia was running seriously flawed calculus if they truly believed that the IRA ad spending could ever accomplish such a thing.

"Everything they're saying now to make excuses about this goes 10 times to what we've been saying for two years about allegations about Russiagate and about the Russian bots," Kavanagh said.