President Trump and recently-deceased five-term Republican Senator from Arizona John S. McCain had been at loggerheads long before the former's presidential inauguration, and it seems like the status-quo has not changed even after McCain's death.

According to the Washington Post, this Sunday Trump rejected a statement made by White House staffers which aimed to praise McCain as a “hero” and give him credit for his military service. The final statement was edited by White House press secretary Sarah Huckabee Sanders, chief of staff John Kelly and other White House aides over the weekend.

Trump declined to release the statement, saying that he preferred to tweet his condolences. The US president’s tweet following McCain’s death on Saturday, in which he did not offer many kind words for the Republican maverick. "My deepest sympathies and respect go out to the family of Senator John McCain," Trump tweeted after reports confirmed that McCain had died. "Our hearts and prayers are with you!" 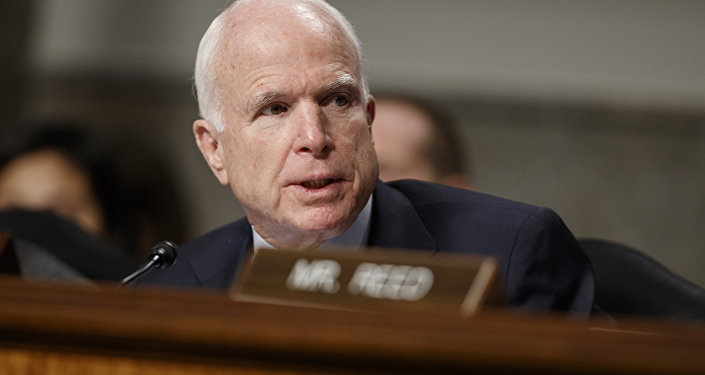 © AP Photo / Evan Vucci
US Politicians From Carter to Trump React to Death of Senator McCain
Trump was criticized by Hill politicians for his pared-down statement on the death of the Republican senator. Mark Corallo, a former spokesman for Trump’s legal team and a longtime Republican strategist, said of Trump’s reaction to McCain’s death that “at a time like this, you would expect more of an American president when you’re talking about the passing of a true American hero.”

Mark Hertling, a former senior military commander who admired McCain for his visit to Mosul during the first Iraq War, said that the 45th president’s response was “very shallow.”

Trump and McCain had many disagreements. McCain often criticized the current US president over his foreign affairs policies, while Trump repeatedly blasted the Arizona Senator for voting “no” to repeal the Affordable Care Act. In 2015 Trump made a comment in Iowa that McCain was “a war hero because he was captured” as he was captured and tortured in Vietnam for almost six years. “I like people who weren’t captured,” Trump said, to widespread criticism.

Five-term Senator John McCain died on Saturday after a year-long battle with a brain cancer, he was 81. His casket will lie in state on Capitol Hill in honor of his achievements, and then will be transferred to the Washington National Cathedral. McCain's funeral will include eulogies from former US Presidents Barack Obama and George W. Bush. The New York Times reported that Trump was specifically asked not to attend the funerals.

Washington at Half Mast: McCain Funeral Speakers Expected to Include Obama, Bush