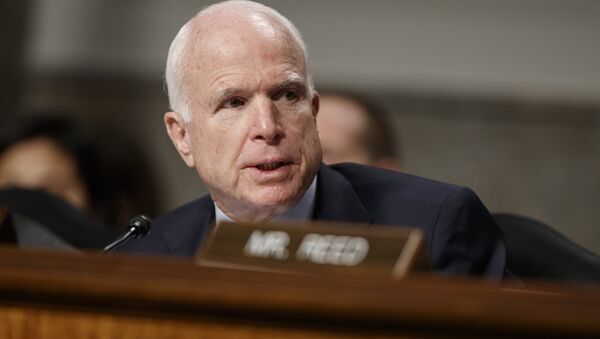 Colleagues and politicians mourn John McCain, who passed away on Saturday after a year-long battle against an aggressive form of brain cancer.

Senator Lindsey Graham, whom The Hill called the closest friend of the deceased politician, said that he had lost his dearest friend and mentor, minutes after McCain’s family released the statement, saying that the entire McCain family "are in his prayers."

I just want to acknowledge the continuing and abiding love, care, and dedication that Cindy McCain and the family are providing @SenJohnMcCain.

President Donald Trump, who had had complicated relations with McCain since his inauguration, sent his condolences to the senator's family, saying that his "deepest sympathies and respect" are with them.

Vice President Mike Pence had also published a statement from him and his wife Kare, honoring his service to the nation.

Karen and I send our deepest condolences to Cindy and the entire McCain family on the passing of Senator John McCain. We honor his lifetime of service to this nation in our military and in public life. His family and friends will be in our prayers. God bless John McCain.

US Secretary of Defence James Mattis was cited by Reuters saying that America "has lost a man who steadfastly represented the best ideals of our country."

Former President Barack Obama, McCain's political opponent during the 2008 presidential election, stated on behalf of himself and his wife Michelle that "few of us have been tested the way John once was or required to show the kind of courage that he did."

“At John’s best, he showed us what that means. And for that, we are all in his debt. Michelle and I send our most heartfelt condolences to Cindy and their family,” they wrote.

Our statement on the passing of Senator John McCain: pic.twitter.com/3GBjNYxoj5

Former president George W. Bush wrote in the statement that “some lives are so vivid, it is difficult to imagine them ended. It is hard to think of them still,” noting in his statement that “John McCain was a man of deep conviction and a patriot of the highest order. He was a public servant in the finest traditions of our country. And to me, he was a friend whom I’ll deeply miss.” The former first lady Laura Bush also extended her “heartfelt sympathies” to Cindy McCain and the couple’s children. “Thanks to God for the life of John McCain,” Bush added.

"Some lives are so vivid, it is difficult to imagine them ended. Some voices are so vibrant, it is hard to think of them stilled. John McCain was a man of deep conviction and a patriot of the highest order.” […] Full statement by President George W. Bush https://t.co/FQVYWIUyGL pic.twitter.com/W8LCxJXRLi

Former President Bill Clinton and 2016 Democratic presidential nominee Hillary Clinton also released a statement, referring to McCain as a "trusted colleague" who "lived by his creed every day."

“Senator John McCain believed that every citizen has a responsibility to make something of the freedoms given by our Constitution, and from his heroic service in the Navy to his 35 years in Congress, he lived by his creed every day. He was a skilled, tough politician, as well as a trusted colleague alongside whom Hillary was honored to serve in the Senate.  He frequently put partisanship aside to do what he thought was best for the country, and was never afraid to break the mold if it was the right thing to do,” the Clintons said.

John McCain believed that every citizen has a responsibility to make something of the freedoms given by our Constitution, and from his heroic service in the Navy to his 35 years in Congress, he lived by his creed every day. https://t.co/946T7PnG53

“John McCain was a man of honor, a true patriot in the best sense of the word. Americans will be forever grateful for his heroic military service and his steadfast integrity as a member of the United States Senate," Carter wrote. "Rosalynn and I extend our sincere condolences to Senator McCain’s family and to the people of Arizona whom he represented so forthrightly for so many years.”

House Speaker Paul Ryan mourned McCain’s loss, saying that the United States “has lost a decorated war hero and statesman," saying that he was “a giant of our time — not just for the things he achieved, but for who he was and what he fought for all his life. He put country before self," he continued, saying "he was one of the most courageous men of the century. He will always be listed among freedom’s most gallant and faithful servants.”

Former Vice President Joe Biden, a longtime colleague and friend of the senator, praised McCain, saying that his life “is proof that some truths are timeless.” Biden’s son had died in 2015 from the same form of cancer which McCain battled before his death.

John McCain was many things – a proud graduate of the Naval Academy, a Senate colleague, a political opponent.

But, to me, more than anything, John was a friend. He will be missed dearly. pic.twitter.com/AS8YsMLw3d

Senator Mitch McConnell released a statement praising McCain as a "bright example." “In an era filled with cynicism about national unity and public service, John McCain’s life shone as a bright example," McConnell wrote. "He showed us that boundless patriotism and self-sacrifice are not outdated concepts or clichés, but the building blocks of an extraordinary American life…It’s an understatement to say the Senate will not be the same without our friend John. I will treasure the many memories we’ve shared together through the years,” he wrote.

Today, the nation mourns the loss of a great American patriot. My full statement on the passing of @SenJohnMcCain pic.twitter.com/yKDgnPw6vm

McCain’s fellow Arizonan senator Jeff Flake tweeted that the world had "lost a hero and a statesman."

Words cannot express the sorrow I feel at John McCain’s passing. The world has lost a hero and a statesman. Cindy and the McCain family have lost a loving husband and father. I have lost a wonderful friend.

McCain’s vice presidential nominee during his 2008 presidential race, former Alaska governor Sarah Palin also offered her condolences to the McCain family, saying he “never took the easy path in life — and through sacrifice and suffering he inspired others to serve something greater than self.”

John McCain was my friend. I will remember the good times. My family and I send prayers for Cindy and the McCain family.
— Sarah Palin and family pic.twitter.com/KRvcIQ99cA

House Minority Leader Nancy Pelosi tweeted that McCain "was a leader and public servant of deep patriotism, outstanding bravery & undaunted spirit. Throughout his career, we all saw his integrity, humility, courage & grace."

@SenJohnMcCain was a leader & public servant of deep patriotism, outstanding bravery & undaunted spirit. Throughout his career, we all saw his integrity, humility, courage & grace. May it be a comfort to his family to know that so many around the world mourn with them.

Former Secretary of State Madeleine Albright tweeted she had known no one with "greater courage" or "stronger convictions" than McCain, adding that “He is irreplaceable, but his legacy will live wherever democracy is defended, human rights are protected, and US leadership is exerted in defense of universal values.

I have not know anyone with greater courage, stronger convictions or more devotion to country than John McCain. He is irreplaceable, but his legacy will live wherever democracy is defended, human rights are protected, and U.S. leadership is exerted in defense of universal values. pic.twitter.com/exnWGImiHQ

John McCain died at the age of 81. A day before his death his family released a statement noting that they decided to cease his medical treatment for an aggressive glioblastoma. McCain was first elected to the US House of Representatives in 1982, and served two terms before being elected to the US Senate in 1986, where the politician served as the Chairman of the Senate Armed Services Committee.