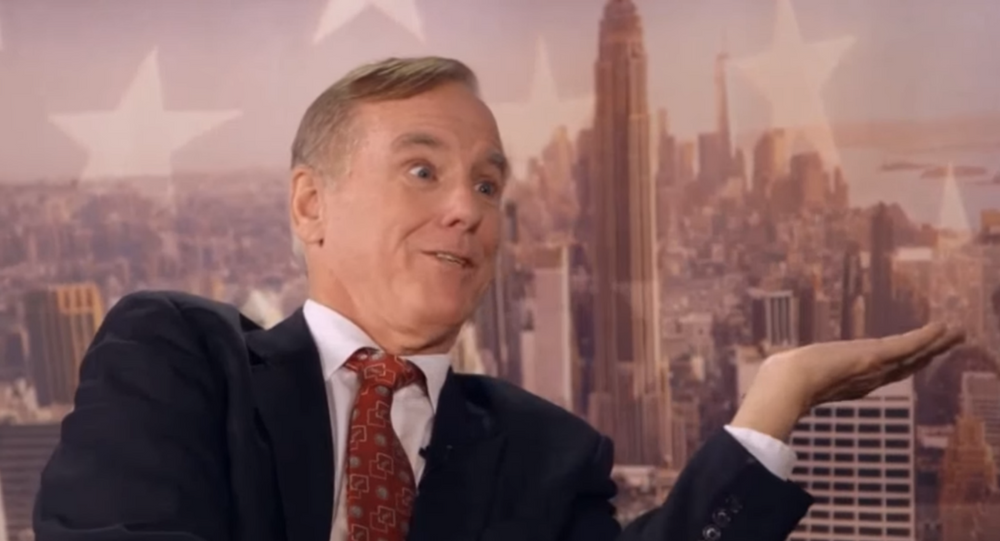 British comedian Sacha Baron Cohen tried and failed to get former Vermont Governor Howard Dean, a Democrat, to comment on whether or not former presidential candidate Hillary Clinton is a woman.

For the latest Sunday installment of Cohen's Showtime series "Who is America?," the 46-year-old comedian disguised himself as conspiracy theorist Dr. Billy Wayne Ruddick.

​"Do you believe Hillary is actually a woman?" Cohen asked a shocked Dean, before the 69-year-old politician interrupted him.

"I know… there's lot of ideas floating around, and, you know, I know her," Dean responded.

And then, folks, that's when Cohen pulled up a doctored image of Clinton on his laptop that shows the outline of a penis in her blue trousers. After zooming in on the image, Cohen proceeded to ask Dean to explain the truth behind the photo.

​"I explain that as maybe the trouser presser did a lousy job, who knows," Dean told Cohen, who quickly shot down the theory.

Cohen later brought up another edited image showing Clinton standing in front of a men's urinal. "Why is she out in there? I mean, why is there a stream? There's a stream coming out from something," he asked.

Although Dean later suggested that the image could have easily been tampered with in order to raise questions about Clinton's gender, Cohen pushed on, going as far as asking if Dean has "seen her lady parts."

Aside from Dean, Green Party presidential candidate Jill Stein also made an appearance on the 30-minute show. During the segment, Cohen, disguised as Ruddick, referred to climate change as "climax change" and tried to suggest that "temperature is cyclical."

​When Stein explained that scientists have proven that temperatures have been steadily rising each year, Cohen pulled up his own trusty graph from "The International Institute of Scientific Truth and Knowledge."

"Temperature goes up and down," Cohen says. "Look at January: it's lower, then it goes up a little bit in April. In July it's really hot, you know, the liberals will be freaking out, saying we gotta buy a Tesla from Lena Dunham. No, hey, relax. In November and December it's down again. It's clearly a pattern."

Shutting him down, Stein tells Cohen he's "demonstrating that the seasons change." Cohen later tried to convince the Chicago native that the CIA is trying to militarize the weather, a claim which she also rejected.

Famous for characters such as Ali G and Borat, Cohen has managed to dupe several politicians on both sides of the aisle since he was given the green light for his latest show. His targets have included the likes of 2008 GOP vice presidential candidate Sarah Palin, former Illinois Republican Rep. Joe Walsh and even former vice president Dick Cheney.

However, to date, Georgia state Rep. Jason Spencer has been the only official to have been booted from office for his appearance on the show. Spencer resigned after yelling racial slurs and exposing his buttocks during his segment.