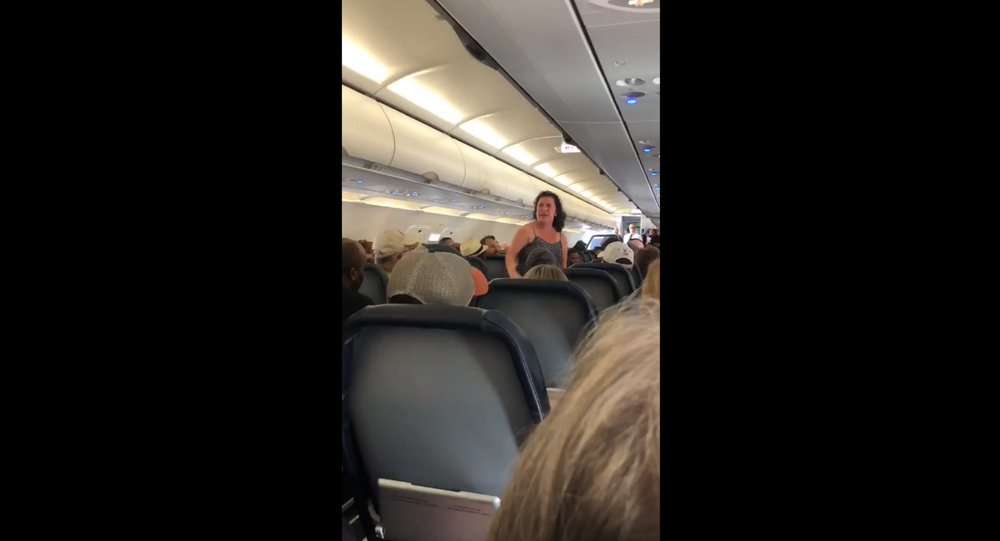 After a Minnesota-bound Spirit Airlines flight was forced to make an emergency landing on Monday for a sick passenger, law enforcement were called to lend a hand after another traveler went on a profanity-laced rant that raised concern.

Video footage captured and shared on Facebook by passenger Chianti Washington shows the unidentified woman running down the plane's aisle, yelling at flight staff and fellow passengers who tried to deescalate the situation.

"Get me the f**k out this goddamn f**king plane," the video begins as the red-faced woman sprints toward the cockpit. "You want to be sh*tty and b*tchy to me? You will see me f**king pissed."

When two male passengers intervene, the woman lifts her fists before continuing to yell.

Screenshot/All Video in one
‘It Was Humiliating': Breastfeeding Mom Booted From Spirit Airlines Flight (WATCH)

"I don't f**king care! Put me in a f**king psych vest," she shouts. "You know who my brothers are? They're f**king Marine snipers. You want to f**k with the f**king Marines? Let me the f**k out this bastard!"

After a flight attendant suggests the two men return to their seats, the woman continues to the front of the plane where she tells passengers that she's been to Hell.

The video later cuts off as the woman returns to her seat in tears.

According to reports, the outburst took place moments after the flight, which was heading to Minneapolis, Minnesota, landed in Rochester, Minnesota, after flight crew were alerted to a passenger who'd gone unconscious. The flight had departed from Houston, Texas.

Texas outlet KPRC reported that the woman was a military veteran who suffers from PTSD. Her outburst reportedly came about because she had not flown for some time and was stressed about the flight being diverted.

"All I could think about was the children on the aircraft — I said a prayer, Washington said. "You just didn't know what she was going to do. We were very much scared and shaken by her behavior."

After Rochester police escorted the woman off the plane, she was released from custody, according to KPRC.

Responding to the incident, Spirit Airlines released a statement apologizing for the disturbance.

"Yesterday morning a flight from Houston to Minneapolis had to land in Rochester, Minnesota, due to a guest experiencing a medical emergency," Stephen Schuler, a spokesperson for Spirit Airlines, told ABC News. "On the ground in Rochester, another passenger became erratic and irate and was removed from the aircraft with the assistance of law enforcement. We apologize to our guests who had to witness this and for the inconvenience of the delay. Safety [is] our top priority at Spirit Airlines."

Rattled passengers were able to resume their travels roughly an hour after the incident took place.