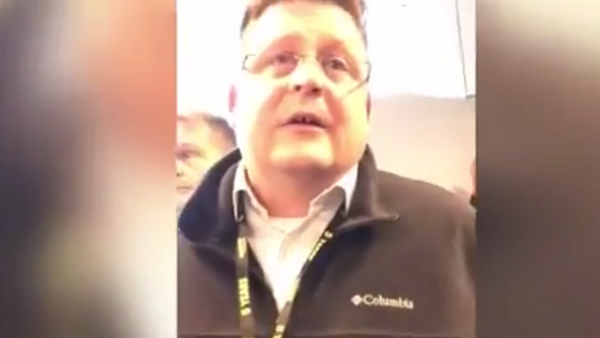 Mei Rui, along with her two-year old son and elderly parents, were stuck in travel hell Friday after airline officials said they wouldn't be allowed to board their flight due to Rui's "non-compliance" with instructions.

Rui, a cancer researcher, was supposed to catch a Spirit Airlines flight from her home in Houston, Texas, to Newark, New Jersey, for a clinical cancer study in New York, the Washington Post reported.

However, the flight was repeatedly delayed because of de-icing issues. When the flight finally got the green light, Rui decided to breastfeed her son in the hopes it would calm and lull him back to sleep during the three-hour hop.

"Every parent with a young child can [imagine], you don't want to be that parent on the plane," she told the Post. "It would be very embarrassing. I just was trying to avoid that."

While the plane's door was still open and people still shuffling around, one of the flight attendants informed her that she would need to strap the child into his carseat for takeoff.

"I asked for just a couple more minutes to finish because if he woke up at that point he would have made a lot of noise," Rui told the Post. "I said, ‘I promise I'll finish before you close the plane's door.'"

As the flight attendants then reportedly convened and discussed the matter, Rui ceased the feeding and strapped her child, who, just like she said, started to wail.

"He was making very loud noises," Rui said of the incident. "But that's not criminal."

Moments later Rui and her group were told they would have to disembark.

"It was humiliating to be chased off a plane in front of hundreds of people," Rui told local Houston station KHOU. "We had never been through anything close to this."

Once in the terminal, the concerned mother was met with a Spirit Airlines' representative and police officers who informed the traveler she wouldn't be allowed back on the flight.

"I just want to know why we were kicked off the plane?" Rui, who filmed the altercation, asked the stern-faced representative.

"Because you were not compliant," was his response.

Confused even more, Rui responded by saying, "Could you tell me which part of the instruction we were not compliant with? I think we deserve to know that."

Rui, who is also a Grammy-nominated pianist, did not get the details she wanted, though.

"If this happened to your family…" Rui began to say before the Spirit Airlines' official interjected, claiming, "it wouldn't happen to my family, I can assure you."

And Friday still was not done with inflicting havoc on the family.

After being unable to retrieve their luggage, Rui's father, who suffers from heart ailments, collapsed after dealing with the stress at the airport and was rushed to the emergency room, the New York Post reported.

In response to the incident, the airline doubled down on its stance and told KHOU: "Our records indicate a passenger was removed from Flight 712 after refusing to comply with crew instructions several times during taxi to runway and safety briefing. To protect the safety of our guests and crew, FAA regulations and airline policies require all passengers to stay seated and buckled during takeoff and landing."

Though the family was given a refund for their tickets, they aren't planning on ever flying with the company again.

"We're not lawbreakers or trouble seekers," Rui told KHOU. "We're the elderly, a baby and his mother. Why did they have to treat us this way?"

Rui never made it to the Big Apple, and she told the Post that this is yet another blow from an already rough year. Rui's family has been living in temporary housing since Hurricane Harvey led to the loss of their home and belongings when the hurricane made landfall in August.