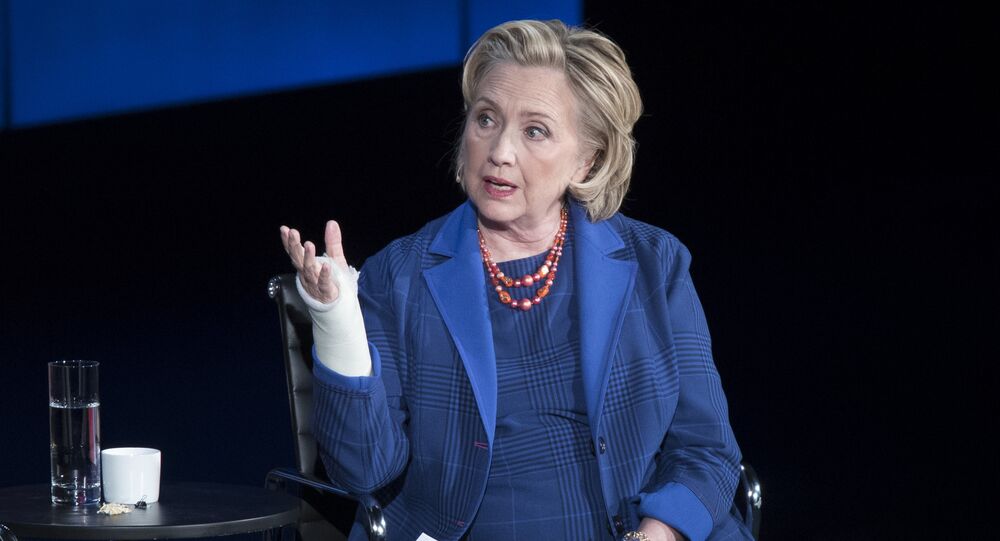 US policymakers on both sides of the political spectrum have weaponized Special Counsel Robert Mueller's probe and Inspector General Michael Horowitz's report in an ongoing battle for power. However, the political fight may become a detriment to the country's national unity.

It appears that Republicans and Democrats are waging nothing short of a "sleaze war" ahead of the 2018 congressional elections and the future 2020 presidential run.

While Special Counsel Robert Mueller is proceeding with his investigation into alleged "collusion" between the Donald Trump campaign and Russia during the 2016 election race, Justice Department Inspector General Michael Horowitz announced the results of his inquiry into the FBI's handling of Hillary Clinton's email case on June 14.

© REUTERS / Carlos Barria
'Crooked Hillary' and 'Slippery Comey': Horowitz About to Drop a Bomb – Analyst
Although the Horowitz report stated that there is no proof that then-FBI chief James Comey's actions were driven by political bias, it exposed controversial practices and anti-Trump bias demonstrated by some of the agency's employees and cast a shadow on the Democratic Party's election campaign.

Additionally, the report revealed that the ex-FBI chief had been "insubordinate" when he announced that then Democratic Party's presidential candidate Hillary Clinton would not be charged for mishandling classified information and not informing former Attorney General Loretta Lynch of his decision.

To Comey's embarrassment, it was found out that he himself had used a private email while conducting FBI business, which contradicted the agency's policies.

​However, what Trump's proponents are apparently seeking is to pull the rug from under the Mueller team and undercut the Trump-Russia inquiry, Robert Costa of The Washington Post noted. According to the journalist, Republicans believe that the findings "will further bruise Mueller's credibility with the public and bolster the president."

As of yet, nothing indicating the Trump campaign's coordination with Moscow has been unearthed.

For its part, The US House Intelligence Committee released a 253-page report stating that they "did not find any evidence of collusion, conspiracy or coordination between the Trump campaign and the Russians."

"House Intelligence Committee rules that there was no collusion between the Trump Campaign and Russia. As I have been saying all along, it is all a big Hoax by the Democrats based on payments and lies. There should never have been a Special Counsel appointed. Witch Hunt!" Trump tweeted on April 28.

On the other hand, observers do not exclude that the Horowitz report may lead to a new investigation into the email case of former Democratic presidential nominee and ex-Secretary of State Hillary Clinton.

The FBI is dead. At least 60+ million Americans don’t trust it, and won’t trust it again unless Strzok/Page/McCabe/Hillar/Ohr/Clapper/Brennan/Comey go to jail.

​Although Clinton, who has recently been labeled as a bad campaigner by Hungarian-born American billionaire George Soros, is not seen as a potential contestant to Trump, the controversy around her emails is somewhat weakening the positions of the Democratic Party, let alone the row over Bernie Sanders' defeat that fragmentized the left-wing camp.

If just one of these criminals go to jail I may have some faith restored in the FBI. Hillary Clinton, Comey, Strzok, Lynch, Page.
At least one….But I’m not holding my breath.

oh my god is she for real? where is all the money the Clinton Foundation received for the poor people of Haiti after that terrible earthquake, she really makes me so sick, why is she still not in jail

​In addition, it seems that Democrats have adopted a wrong strategy in dealing with their political opponents. In his article entitled "How to Lose the Midterms and Re-elect Trump," Frank Bruni, an op-ed columnist for The New York Times, blasted Trump's opponents for "mirroring" the president's extravagant style: "When you answer name-calling with name-calling and tantrums with tantrums, you're not resisting him. You're mirroring him. You're not diminishing him. You're demeaning yourselves," he wrote.

© AP Photo / Patrick Semansky
Investigative Journalist: Comey 'Should Have Come Down' on Clinton Over Emails
While Democrats are apparently struggling to find a leader who could unify the party, not everything is rosy in the Republicans' garden either. According to Jennifer Rubin of The Washington Post, some Republican senators have become frustrated with Trump's policies, calling the president's leadership a sort of "a cultish thing." Together with the so-called "NeverTrumpers," they form an opposition to the US president within the GOP.

The ongoing political struggle in the US may further divide American society ahead of the elections. Nearly a year ago, a Quinnipiac University national poll indicated that 62 percent of voters believed that the US president was dividing the country, while just 31 percent said he was going to unite the country. The sleaze war between Republicans and Democrats is likely to deepen the rift.

Kremlin Unaware of Meeting Between Trump Team, 'Russian' Having Dirt on Clinton