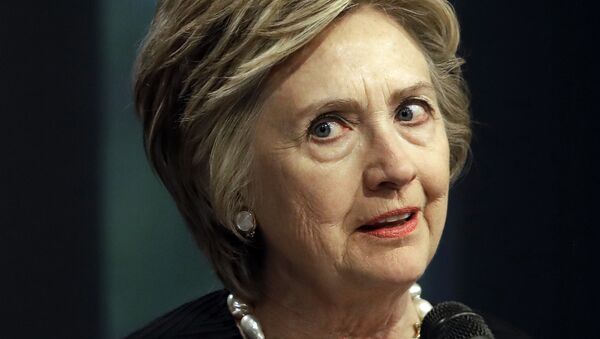 A highly anticipated US Department of Justice report accuses ex-FBI director James Comey of being insubordinate but not politically biased.  Inspector General Michael Horowitz said Mr Comey had broken dramatically from FBI and department norms in handling an inquiry into Hillary Clinton's emails. Mrs Clinton has blamed Mr Comey for her election loss to Donald Trump in 2016.

FBI director Christopher Wray said he accepted the report's findings but he added that nothing in the report pointed towards political bias or impugned the FBI as an institution.

Michael Horowitz found that while Mr Comey's actions were not the result of political bias, by departing so clearly and dramatically from FBI and department norms, the decisions negatively impacted the perception of the FBI and the department as fair administrators of justice.

Sputnik spoke to American investigative reporter Dave Lindorff about what it means for the future of the FBI.

Sputnik: How damaging will this be for the FBI?

Dave Lindorff: The FBI is in a tank right now in terms of public image. It depends on who you ask, people on the left the liberals who are looking for ways to get rid of trump, they’ll say this doesn’t change anything, Comey was right to go after Trump earlier and he also went after Clinton. It was even handed, because they want the FBI to keep looking into or using Mueller to have FBI agents to go after issues involving Trump. They’re not going to want to say the FBI is terrible. People on the right who are looking at evidence of a deep state effort to get Trump will say this proves it that it is irresponsible.

Sputnik: The controversy around Comey’s emails, this will surely annoy Clinton and the democrats?

Dave Lindorff: There is big difference there because what Clinton did was actually a crime. Objectively speaking Comey didn’t have the guts to go after her on it and should have earlier, when he did the first investigation in to it. There’s a law that Federal agents and Federal agents have to keep records of everything they have for purposes of the Freedom of information Act and what she did was avoid that when she was Secretary of State, by keeping a separate server in her house. That was a crime; Comey should have come down on her on that and even sanction her for it.

Sputnik: What will the FBI need to improve after this report?

Dave Lindorff: The FBI needs to change so many things, this is small compared to the bigger issues of warrantless tapping of people’s communications and of these FBI letters where they can investigate you and tell you you’re not allowed to tell anyone they’re doing it. We don’t know how many American’s get these letters, but these kinds of things are just police state tactics. So until the FBI cleans up that, it just a rogue agency that’s introducing these kinds of police state tactics into the American government.

000000
Popular comments
hils is poison to everyone.
michael
16 June 2018, 08:18 GMT
000000
There is nothing good to die for here in the US. Our criminal military should lay down their weapons and walk back home in shame for what they have done to the world. That we haven’t had a military mutiny is a mystery to me.