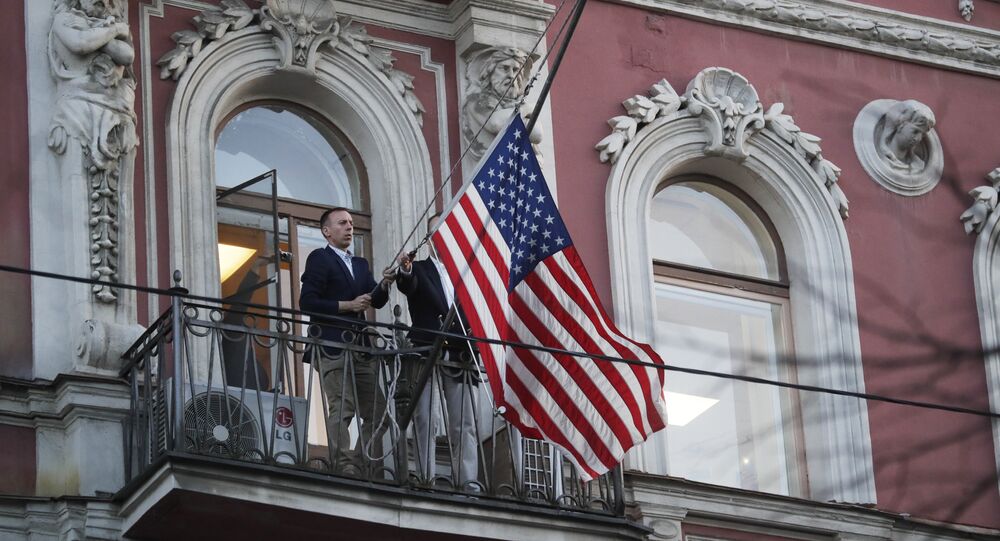 'Vse Budet Khorosho': WATCH Expelled US Diplomats Tell What They Leave Behind

Now that 60 diplomats have been ordered to leave Russia by the country's Foreign Ministry in a tit-for-tat response over the Moscow-London row, the US Embassy has released a farewell clip. The personae non grata opened up about what is on their hearts and minds ahead of the one-way journey.

The video “Thoughts for the Road,” featuring some of the 60 expelled diplomats, was posted on the US Embassy Twitter page after they had left in accordance with the retaliatory steps the Russian Foreign Ministry took over the Skripal case. The clip opens with the address in Russian of ex-Chief of US trade mission Michael Lally.

“As we are getting ready for our journey back home, we are thinking over the results and achievements of our work here in Russia. As I represent the US Trade Ministry, we have been working very close with Russian and US companies. Now, when we are leaving ahead of a term ending, I can fully appreciate the importance of our cooperation and what it means. It is about our working together, creating jobs not only in Russia, but also in the US”, he said.

The former trade envoy and his fellow expelled colleagues, called for a dialog between two countries despite their ups and downs in relations.

“My colleagues and I are sure about the importance of the relations, as we work in different fields besides business, such as culture, education, and tourism. We need to restore the dialog; it’s an important target for us,” concluded Lally, who studied here in Russia some 30 years ago.

There are staffers from the Political Department of the Embassy, the Ambassador’s Office and Press Office among the speakers. They talked not only about their work, but also their first experiences in Russia, their roots of interest in the country, and their friends from here.  The clip is concluded with one of them saying “Vse budet Khorosho!”,  which translates in Russian as “Everything is going to be fine!”

This March the US, as well as dozens of UK partners, expelled Russian diplomats after Sergei Skripal, a former Russian spy who'd worked for UK intelligence and his daughter Yulia were poisoned with a nerve agent in Salisbury, as London accused Moscow of the attack.

Kremlin Disagrees With US Claims That Russia is Waging 'Diplomatic War'