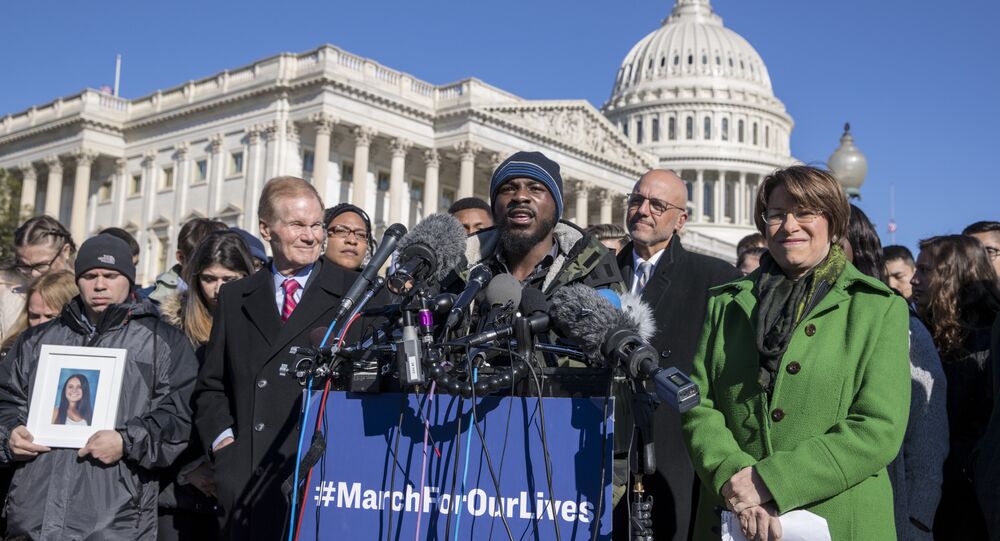 As the student-driven protest movement against gun violence continues to grow in the aftermath of the Parkland, Florida, school shooting February 14, the US capital is preparing for the massive “March for Our Lives” event Saturday, one of many linked protests in cities across the US and in cities around the world.

The event's Facebook page describes it as "a movement dedicated to student-led activism around ending gun violence and the epidemic of mass shootings in our schools today."

"On March 24, we will take to the streets to demand that our safety become a priority," it continues.

Although 44,000 people have indicated they are Going to the DC protest on Facebook, the Washington Post speculated Thursday that as many as half a million might attend, which would make it one of the larger mass protests in Washington history.

One optimistic Twitter user, already posting from Pennsylvania Avenue, predicted it would be "the biggest pro-life event in history."

Although the statement declares that "school safety is not a political issue," event organizers also vow that "There cannot be two sides to doing everything in our power to ensure the lives and futures of children who are at risk of dying when they should be learning, playing, and growing."

"The mission and focus of March for Our Lives is to demand that a comprehensive and effective bill be immediately brought before Congress to address these gun issues. No special interest group, no political agenda is more critical than timely passage of legislation to effectively address the gun violence issues that are rampant in our country," the statement continues.

The city's Metro rail service will operate on a rush-hour schedule Saturday, the Washington Post reports, and drivers are advised to avoid the Federal Triangle area and anywhere near Pennsylvania Avenue NW, a wide boulevard that connects the White House to the US Capitol building, where Congress meets, that will serve as Ground Zero for the event.

The March for Our Lives Facebook page lists 81 cities with events Saturday, including ones outside US borders: London and Edinburgh in the UK; Munich, Germany; Toronto and Montreal in Canada; and Brussels, Belgium. The event's website indicates "sibling marches" on every inhabited continent, including events in Colombia, Ghana, Romania, India and Australia. The international marches seem to be mostly driven by American expatriates, but indicate that non-Americans are very welcome to show solidarity.

However, the march in DC promises to be the main event, with student activists flocking from across the country to demand reform within earshot of Congress and the White House. A bus full of students from Broward County, Florida, home to Marjory Stoneman Douglas High School, site of the February 14 shooting that catalyzed the mass demonstrations, arrived early Friday morning after a 16-hour overnight trip.

Students from Broward County have arrived to D.C. for the #MarchForOurLives after a 16 hour drive overnight. @ABC7News pic.twitter.com/sFlw5laER4

​Event facilitators have prepared a stage and massed toilet facilities for the marchers.

The stage is up for tomorrow's March for Our Lives rally in Washington, DC. pic.twitter.com/SiTY5FC9RD

​Washington, DC, is preparing for hordes of people at tomorrow’s anti-gun violence march. There are dozens of portable toilets set up outside the train station, a short walk from the Capitol.#MarchForOurLives #MarchForOurLivesDC pic.twitter.com/DMZZV53Kd2

​Some locals, however, aren't waiting for the weekend to voice their dissatisfaction with the lack of congressional action on gun violence. David Culver, a TV anchor with local news station NBC4, captured this car crossing a bridge over the Potomac River into the city Friday morning:

This driver using his commute over the 14th St bridge to spread a message ahead of the #MarchForOurLives @nbcwashington pic.twitter.com/svd17gQ5QR

March for Our Lives is not the first event student activists have convened in DC since the Parkland shooting. February 21, hundreds of students from several area high schools converged on the US Capitol building and the White House to both "call on lawmakers to actually take action to prevent another Parkland, Las Vegas, or Sandy Hook from ever happening again" and hold vigil for the Parkland victims, Sputnik reported at the time.

Students across the US have begun to find their political voice through the post-Parkland wave of activism, organizing a massive nationwide walkout at 10 a.m. local time on March 14, one month after the Parkland shooting. Students presented lists of demands that went far beyond mere gun control, with Chicago Public Schools students noting the intersection of the movement against gun violence with the Movement for Black Lives, calling on leaders to address social issues of community and family support, poverty alleviation and demilitarization of schools as well, Sputnik reported at the time.

As if an extra half-million people in the city wasn't enough this weekend, the city's famous Cherry Blossom Festival is due to begin Sunday, an event that itself draws up to a million extra visitors a day during its peak period, when the thousands of Japanese Cherry trees surrounding the Tidal Basin are in full bloom. Although the National Weather Service noted Friday that recent snowy weather has pushed the "peak date" back to early April, visitors often try to beat the crowds by viewing the sea of pink flowers before the official peak of the season, when 70 percent of the trees are expected to be in bloom, according to WTOP.