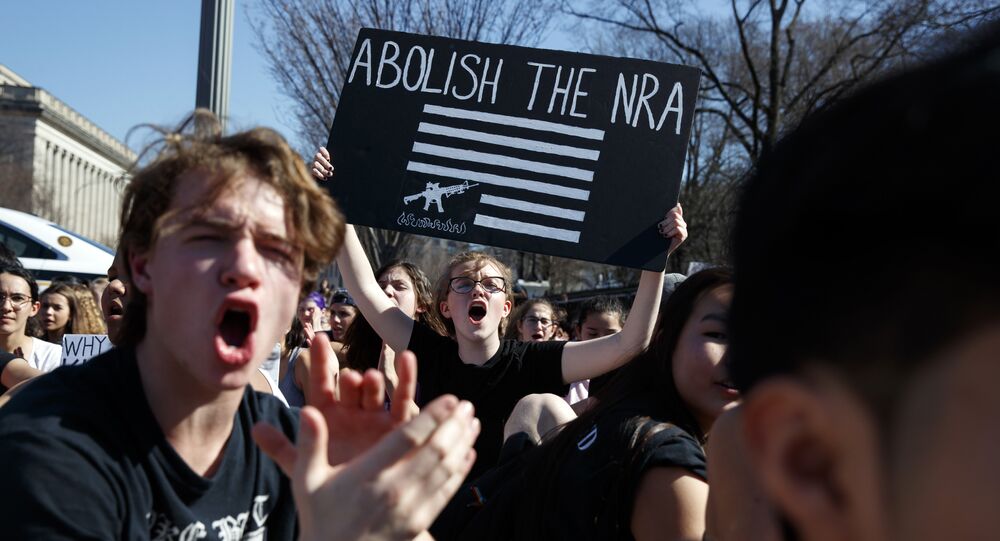 On Wednesday, scores of Maryland high schoolers walked out of class to march for gun reform outside the US Congress.

The march, announced Tuesday by student organizers on Facebook, included hundreds of high school students from Montgomery County's Bethesda-Chevy Chase, Richard Montgomery and Montgomery Blair high schools, all of which are close to Washington, DC.

​Students departed from their schools at roughly 9:30 a.m. local time, walked to local metro stations and met up at Union Station, the city's central train hub, before joining forces in front of the nearby Capitol building in central Washington, DC.

​"After the Parkland, Florida shooting, we students can no longer stay silent on the issue of gun violence in the United States," a press release published by event organizer Daniel Gelillo states. "Far too many innocent lives have been taken in these slaughters, all because of the easy access and availability of guns in general and assault weapons in particular."

"We expect our leaders to do whatever is required to keep us safe — this has not happened. We now call on lawmakers to actually take action to prevent another Parkland, Las Vegas, or Sandy Hook from ever happening again," the statement adds, before concluding with "enough is enough."

​In the shadow of the Capitol's huge white rotunda, they were greeted by Maryland Representative Jamie Raskin and Jen Pauliukonis, president of Marylanders to Prevent Gun Violence.

"I want you to know that America's high school students are leading a revolution against political complacency and collusion with the NRA," Raskin told students. "When America stands up, the NRA is no match for the power of a united America."

After cheering for Raskin, the high schoolers adopted the chant: "hey, hey, NRA, how many kids have you killed today," the Washington Examiner reported.

"I understand marching isn't automatically going to change legislation," Jedediah Grady told journalist Kara Voght. "But it's not just about change. Next year I'll be able to vote."

"With past events in Florida, I feel unsafe at school," Uriel Zeitz, a student from Winston Churchill High School, said. "I'm doing this for every student."

After wrapping up at the Capitol, demonstrators relocated to the White House.

​But high schoolers weren't the only ones participating in demonstrations today. Students from Rocky Run Middle School in Chantilly, Virginia, also staged a walkout and protested on their campus in the DC suburb. The school is roughly 6 miles away from the NRA headquarters in Fairfax, Virginia.

​The marches in the Washington, DC, metro area happened the same day that survivors from the mass shooting in Marjory Stoneman Douglas High School are expected to meet with US President Donald Trump, the Examiner reported.